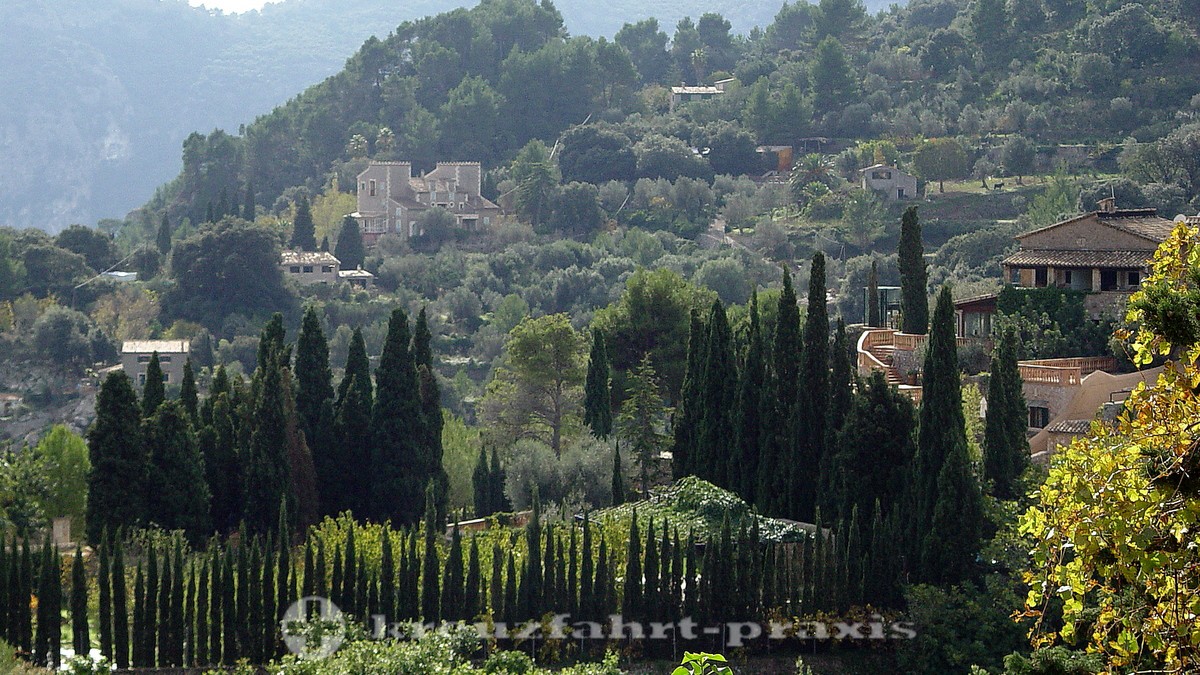 Palma de Mallorca is one of the most visited cruise destinations in the western Mediterranean. We are traveling by ship to Palma for the second time within six weeks. Our plan is as follows: We spend the first half of the day in the 20-souls community, 2000 kilometers from Palma Valldemossa. We use the second half of the day for a tour of Palma's old town. 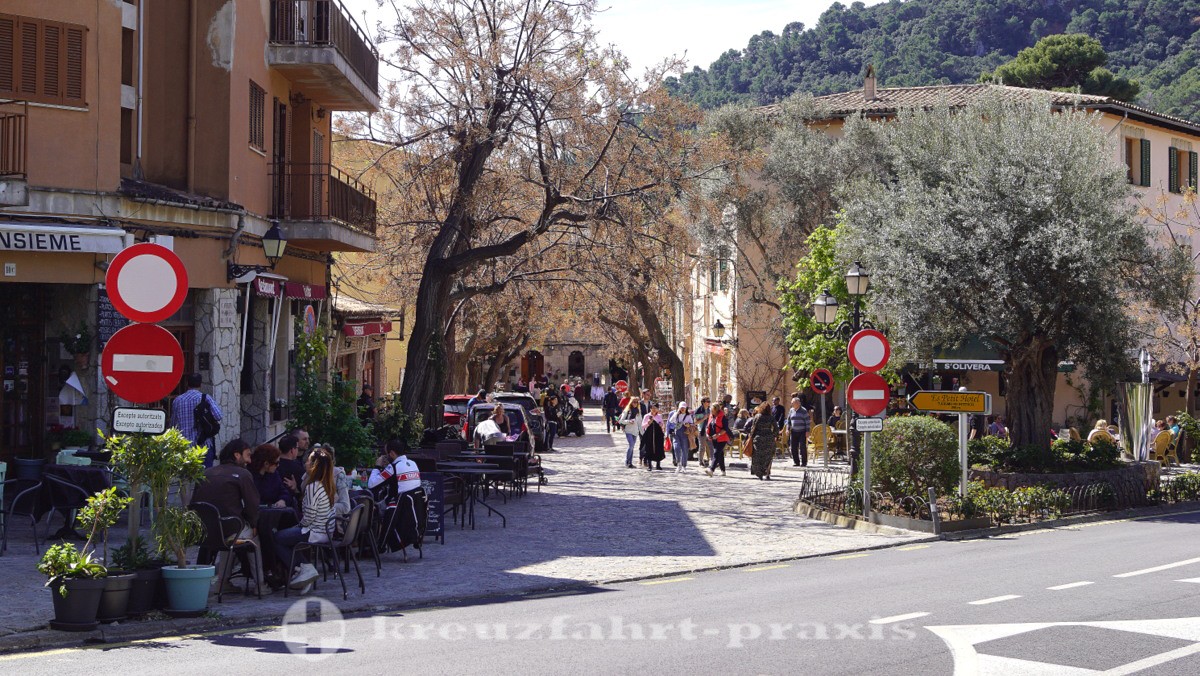 In the center of Valldemossa

Valldemossa's chronicle tells of famous guests. The composer Frédéric Chopin and his lover, the writer George Sand, spent several months in the Valldemossa Charterhouse in the winter of 1838/39. Hollywood actor Michael Douglas is a modern day celebrity. He owns a million dollar estate outside of town. And even the Mallorcan kings found a comfortable place to stay in the high altitude of Valldemossa in the 14th century during the hot summer months.

Valldemossa - a small town straight out of a picture book

We are not interested in the celebrities and their story (s). The place attracts us. Valldemossa is a small town straight out of a picture book: steep streets, cobblestone streets, churches, lush gardens as well as beautiful restaurants and bars are the hallmarks of the city. People find it a privilege to live in Valdemossa, although the place is very popular with tourists in the season. 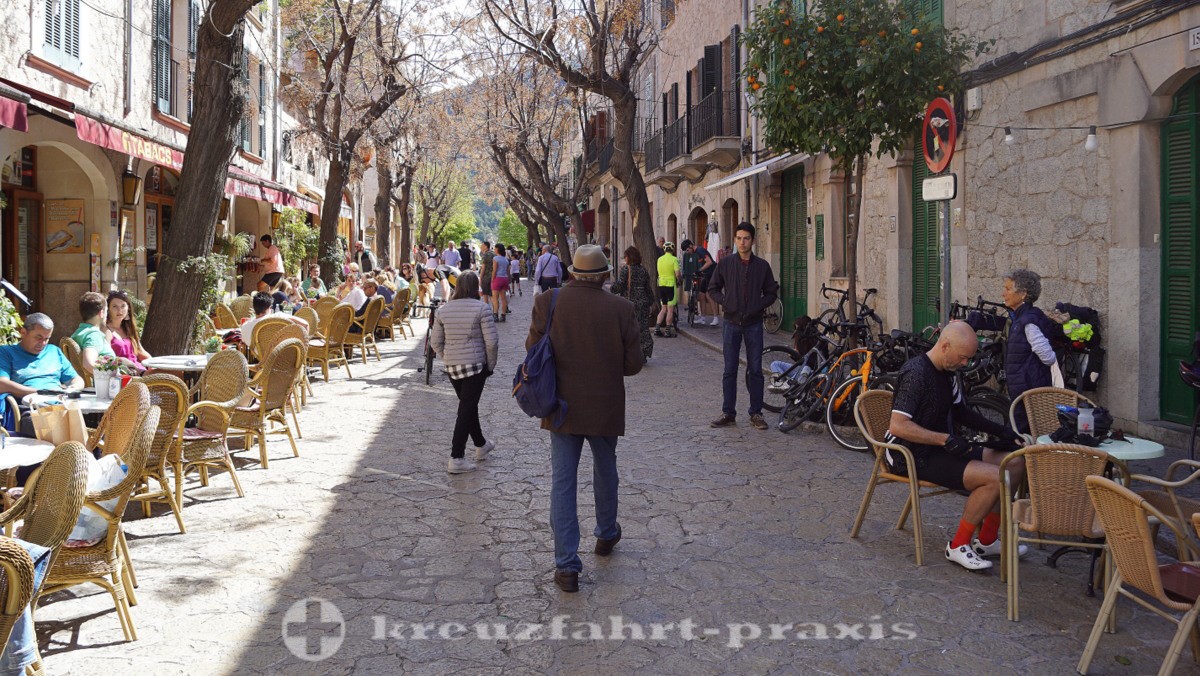 Take the bus to Valldemossa

We can reach Valldemossa in 45 minutes by bus. It would be much faster by car, but we don't need a car on the short distance between Palma and Valldemossa. After we have passed the "Centro Penitenciario de Mallorca", the extensive prison complex, and then the university campus, the street in front of Valldemossa rises steadily. The place is at least 420 meters above sea level. We admire the cyclists who torment their way up the mountain route on a beautiful Sunday in April 2019. 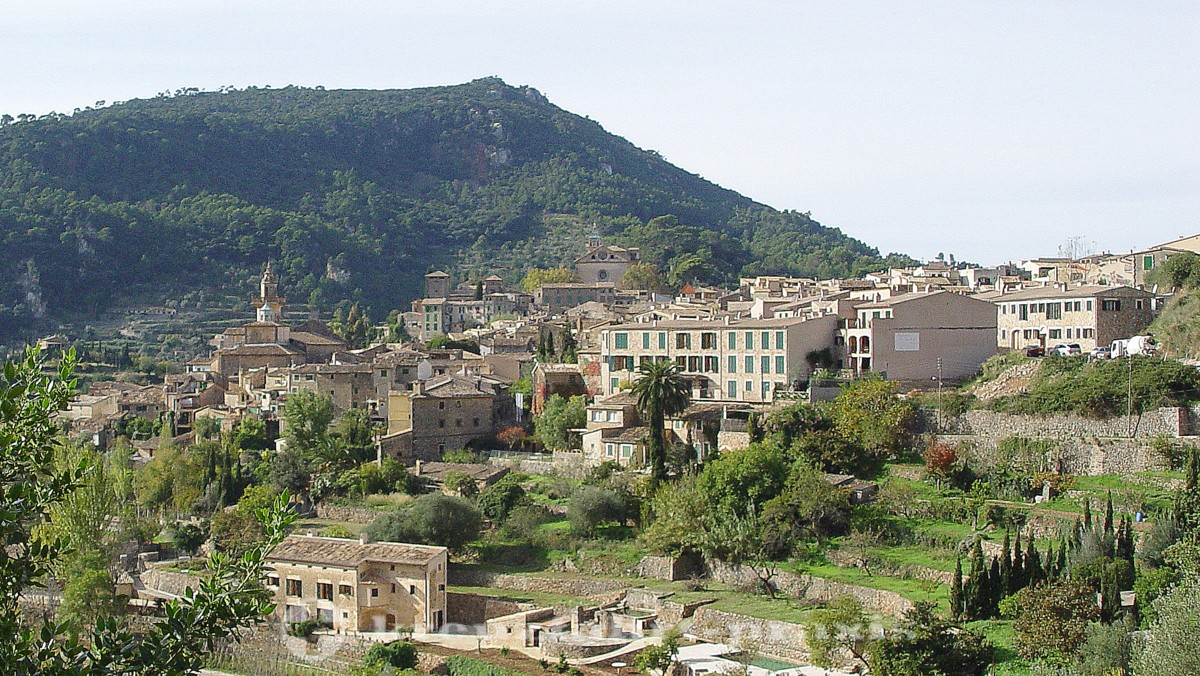 Vallldemossa on the slopes of the Tramuntana mountains

The place is surrounded by the wooded slopes of the Tramuntana Mountains. We last visited the place nearly eight years ago. Apparently nothing has changed since then. Valldemossa has lost none of its charm despite the flow of visitors on Sundays. 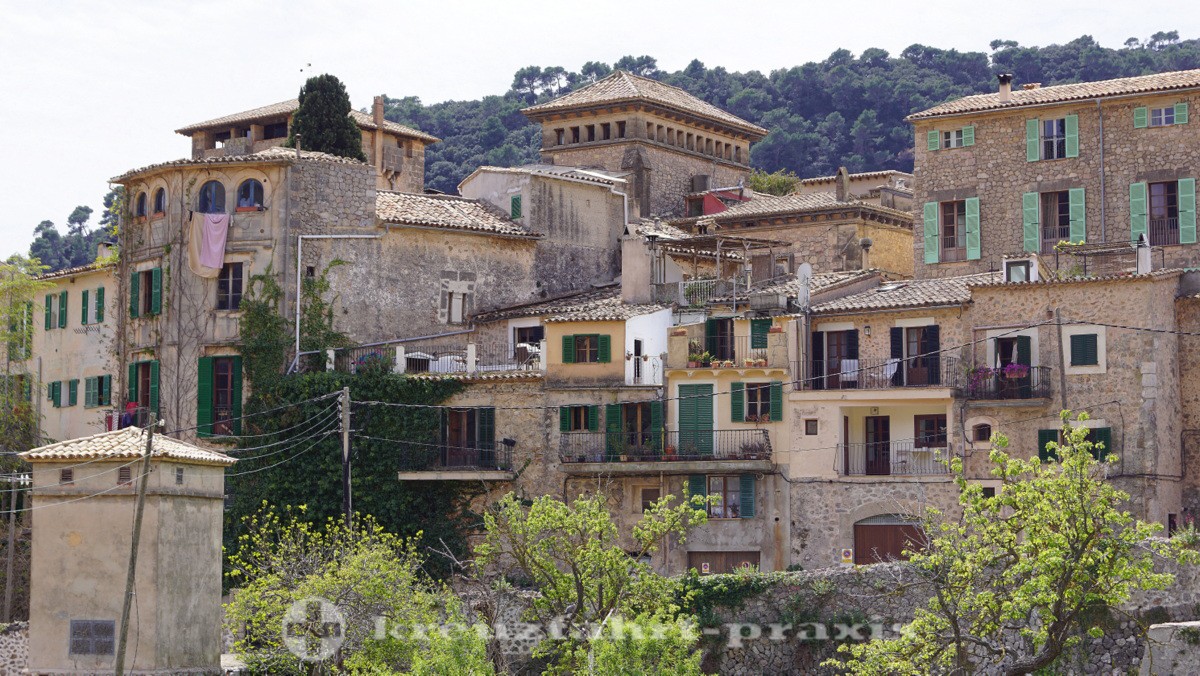 The cafes and restaurants in the center are well frequented and the shopkeepers have nothing to complain about either. The streets are lined with stately trees. And on the Plaça de Cartuja, the square of the Carthusian monastery of Santa Maria, time seems to have stood still. The few visitors who get there are irrelevant. 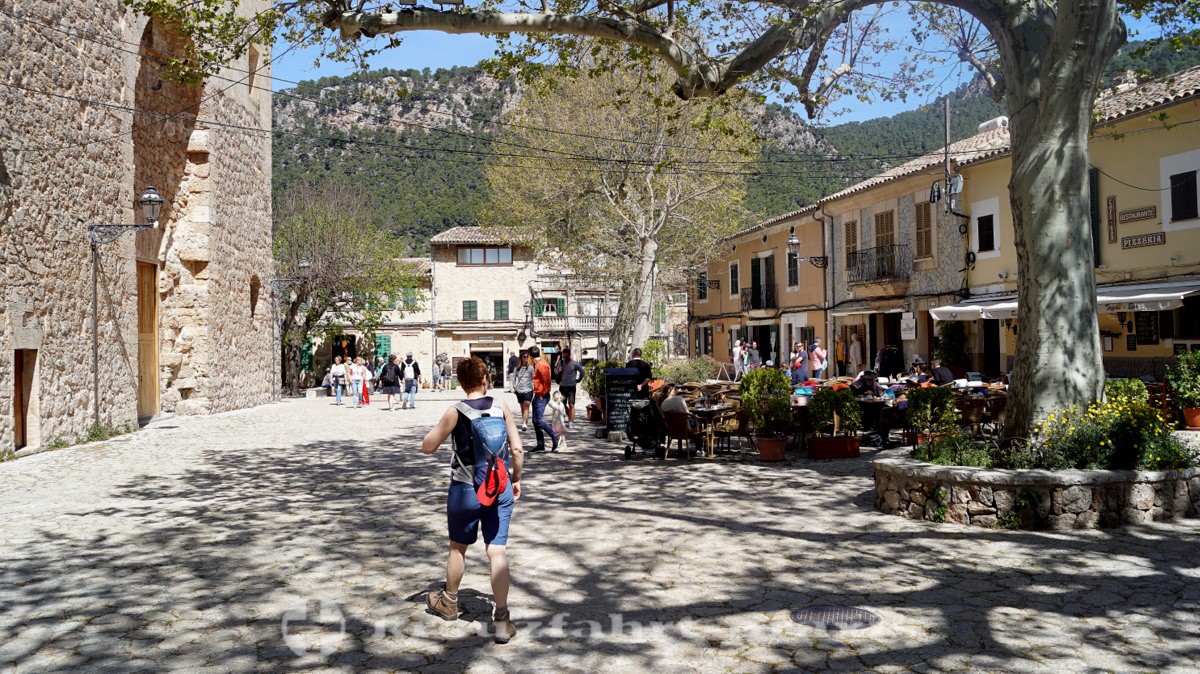 At the Plaça de Cartuja, the Royal Charterhouse catches our eye. The monastery originally served as a palace for the Mallorcan kings. Its construction was completed in 1309. Already ninety years later, Carthusian monks took over the palace with the requirement to use it as a monastery. It was not until 1835 that the building was reverted to the state. 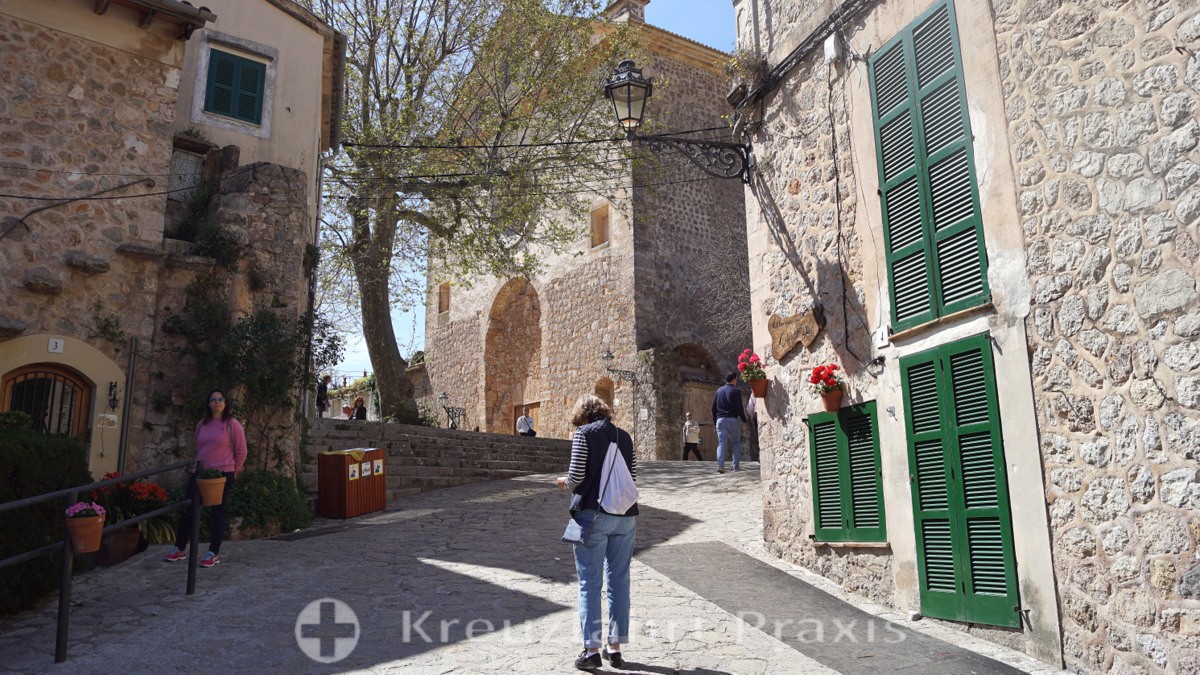 In front of us the Plaça de Cartuja

The Royal Charterhouse is currently a museum. The abbey, the adjoining church decorated with beautiful frescoes and the former pharmacy of the Carthusian monks can be visited. The monastery cell, which the artist couple Frédéric Chopin and George Sand lived in during their stay in Valldemossa, also serves as an exhibition space. An antique printing press, the collection of Archduke Ludwig Salvator of Austria and an art collection by regional artists, especially Joan Miró, can be viewed in the attached municipal museum. 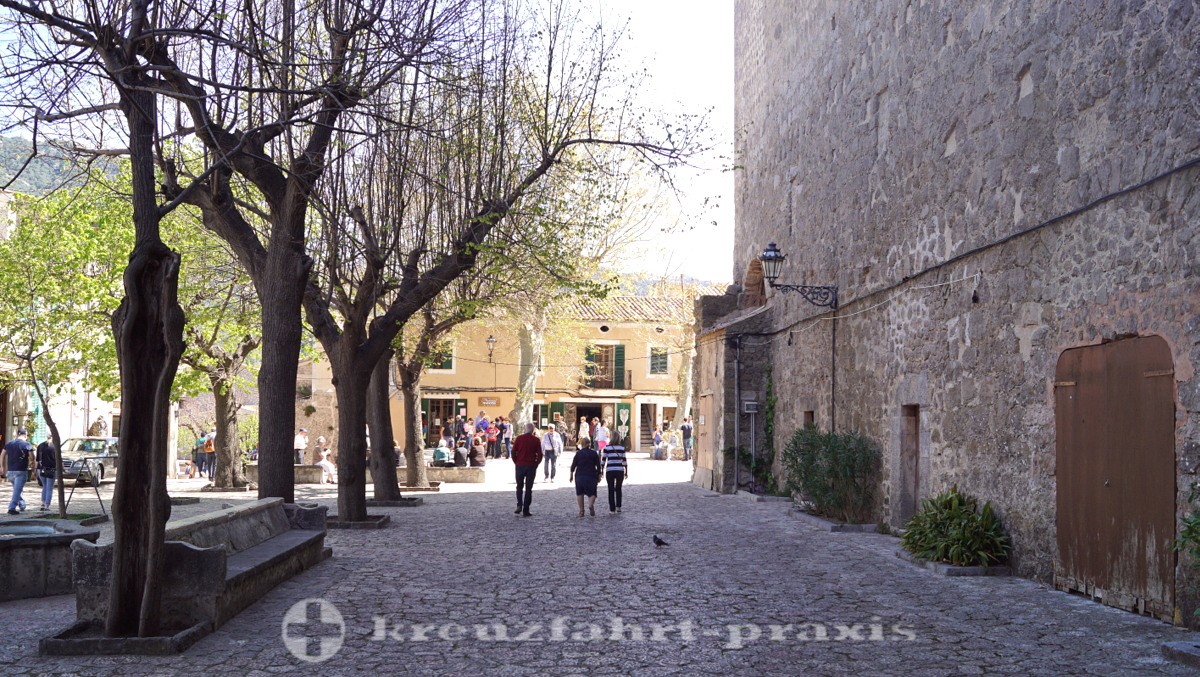 A sight of minor importance is the Rei Joan Carles I gardens. It is behind the monastery church. Details of the garden are not known. It is likely that the monks originally planted their vegetables in the garden. Only later was the usable area converted into a respectable garden with hedges, roses and beautiful trees. There is a bust of Frédéric Chopin in the garden. 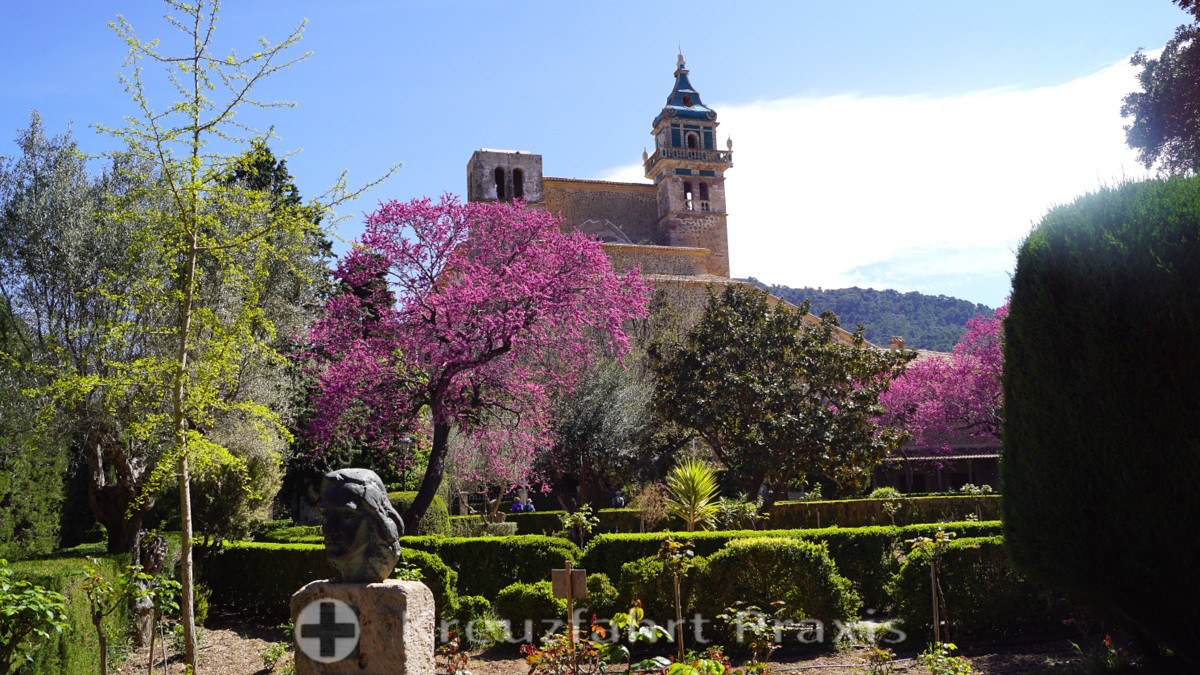 The Palau del Rei Sanç, the palace of King Sancho, should not go unmentioned. Three buildings are grouped around a central tower. The dining room and the ballroom are worth seeing. Piano concerts with Chopin music are regularly held in the palace's music room.

Museum opening hours: Monday to Saturday from 10:00am to 16.30:XNUMXpm

From the Plaça de Cartuja we go down to the old town. With the construction of the Parish Church of Sant Bartomeu was started in 1235. Forty years later, in 1278, the church came under the protection of the Holy See. At that time it was named after the apostle Bartholomäus. 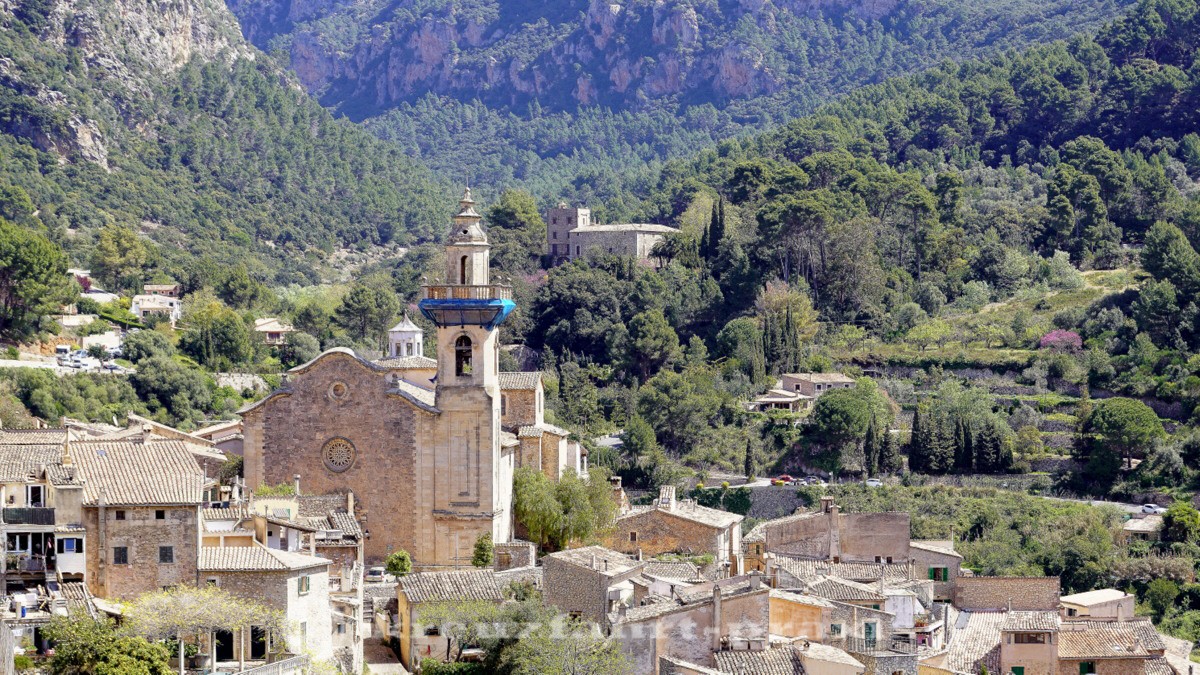 The parish church of Sant Bartomeu

The church, which was built in the Gothic style and is well worth seeing, underwent constant changes in the following centuries. The high altar and the twelve side chapels are striking. One of the chapels is also dedicated to the local saint “Santa Catalina Thomàs”. The saint is from Valldemossa.

At the end of our visit, we stroll through the winding streets of the old town that surround Sant Bartomeu. It's hard to believe. In the town center, life is “raging” and in the old town time seems to have stood still. 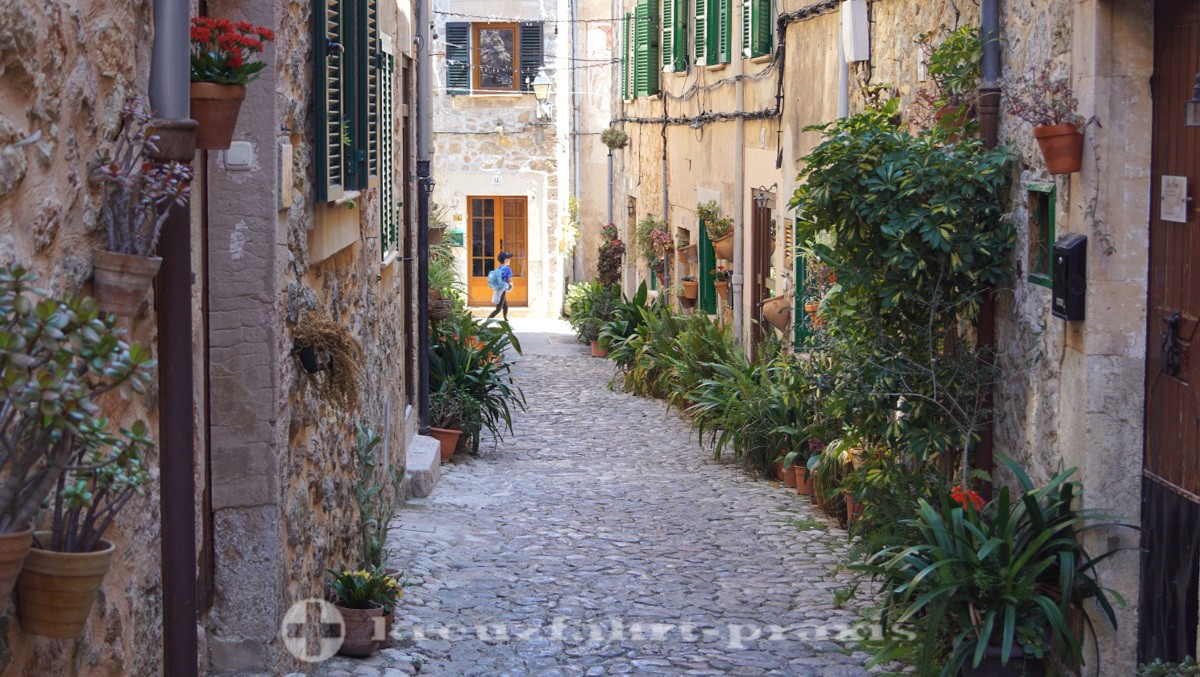 One of the old town streets in Valldemossa

It's time to stop at one of the tapas bars. We choose the “Aromas” bar. It has a beautiful indoor terrace. The right place to review Valldemossa's attractions. 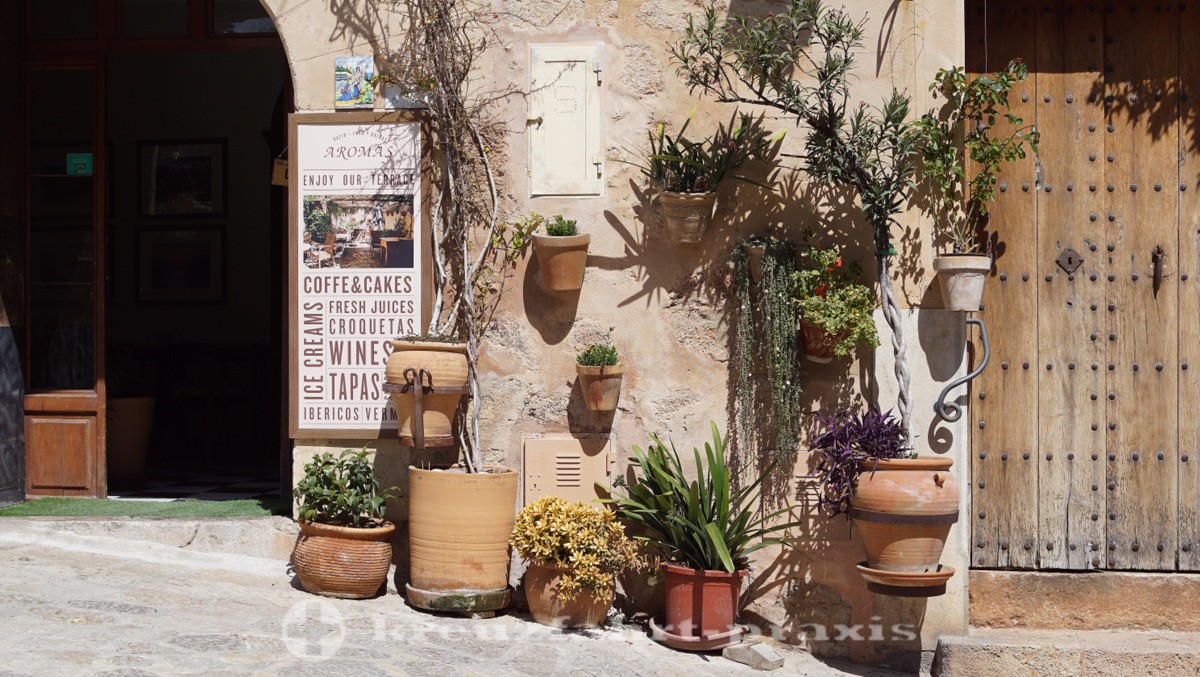 It is time to return to Palma. The bus from Soller leaves on time and brings us back to Plaça España in Palma. From there we start our tour through Palma's enchanting old town. But that's a different story.

From the underground bus station Estació Intermodal in Plaza España, buses on line 210 run regularly to Valldemossa and Soller. The buses run every hour every day. Traffic is “thinned out” on weekends and public holidays. The price for a single trip to Valldemossa is 1,90 euros. You can hear that!