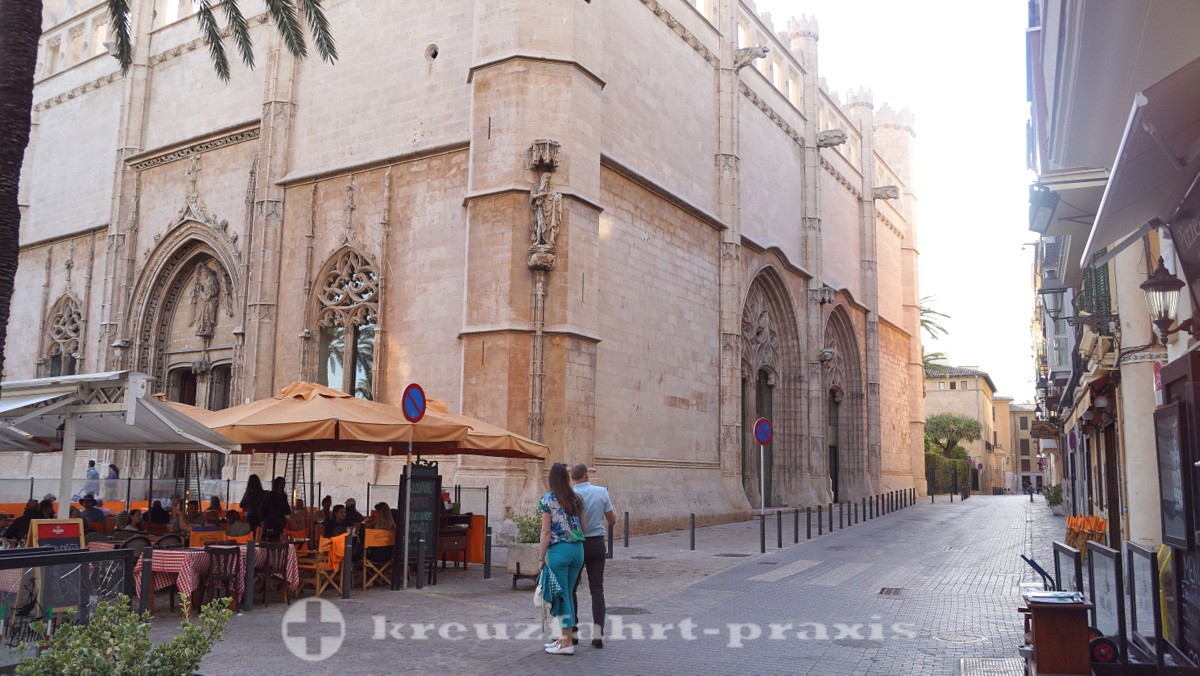 Palma, the capital of the holiday island Mallorca, is not a small, tranquil place. Palma is a veritable big city with more than 400.000 inhabitants, which is also visited by thousands of day visitors every day. The city is the focal point of island tourism, not least because of its busy airport and the two cruise terminals. On top of that, Palma is the bishopric as well as the administrative and university center of the Balearic Islands. 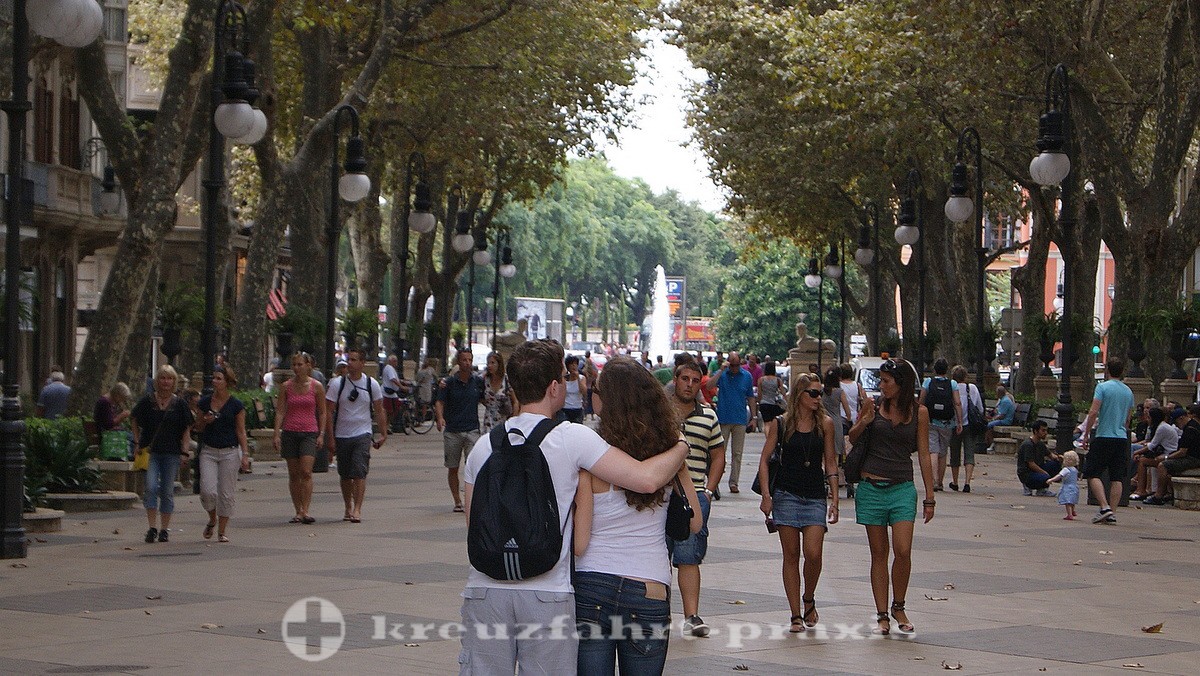 Passeig des Born - one of the promenade in Palma

In Palma, Moorish architectural styles mix with those of the Gothic and Renaissance. In addition, there are a few buildings that are characterized by the style of Spanish “modernism”. All of this is reason enough to stroll through Palma's old town with your eyes open. We invite you to join us on our tour of Palma. And we promise you it will be worth it. 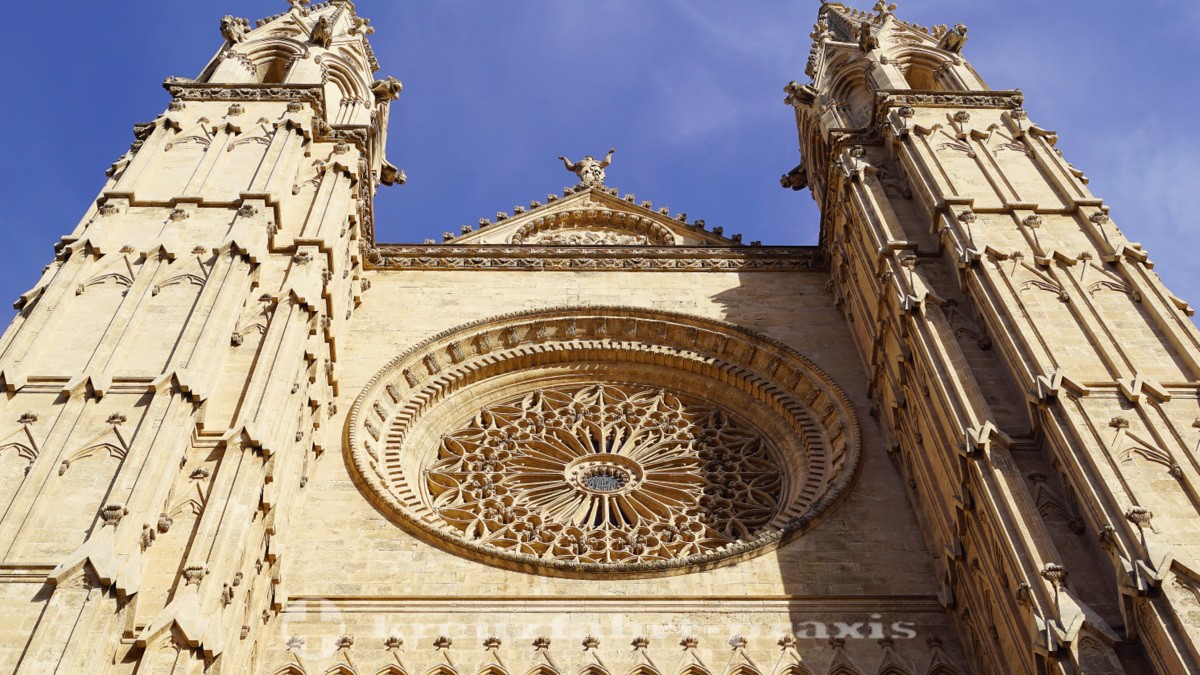 We begin our tour at the rectangular Plaça Major, Palma's most important square in the center. On the more than one hectare area, surrounded by stately buildings, cafés and restaurants invite you to daydream. No matter what our plan for the day may be, we like to dawdle on Plaça Major. 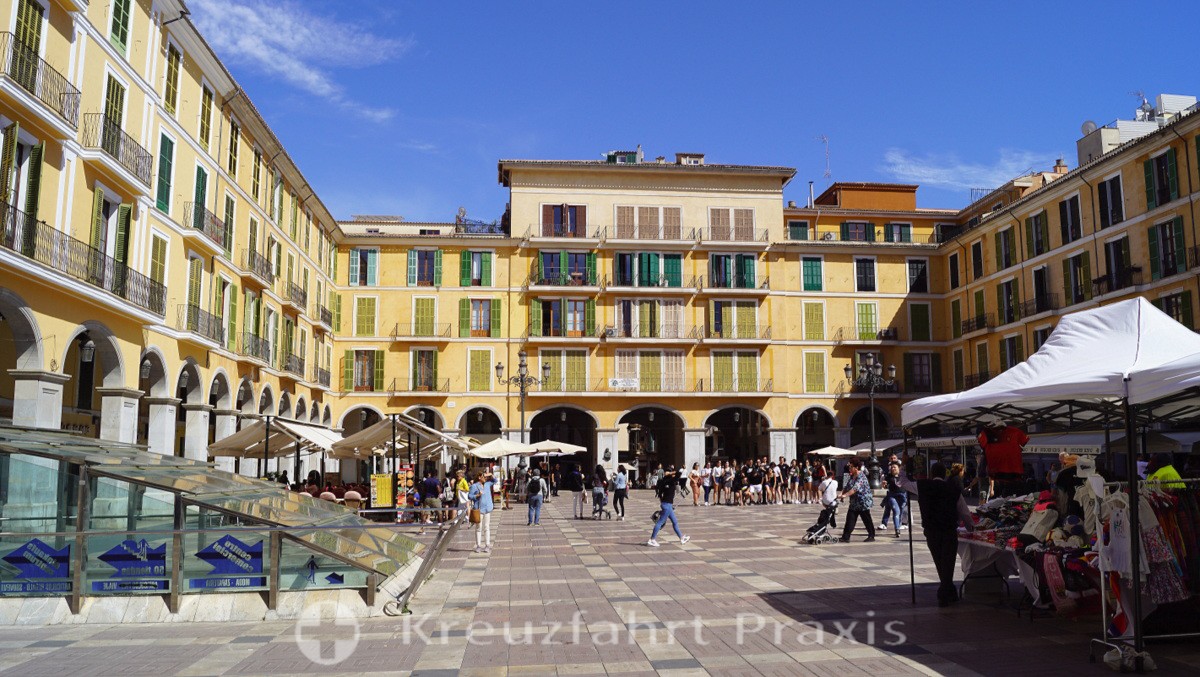 We leave Palma's “good room” through one of the three arches embedded in the front of the house and suddenly stand at the Plaça del Marquès del Palmer. This plaça is one of what feels like innumerable squares in the center of Palma. In addition to the many shops, we like the modernist monument there Can Forteza Rey. The architect of the eye-catching Art Nouveau building was influenced by the star architect Gaudí, who led the renovation work on La Seu Cathedral from 1904 on. We are mainly known to Gaudí for the buildings he created in Barcelona, ​​including the Sagrada Familia. The richly decorated Can Forteza building is a rare eye-catcher in the architectural monotony of the surrounding buildings. 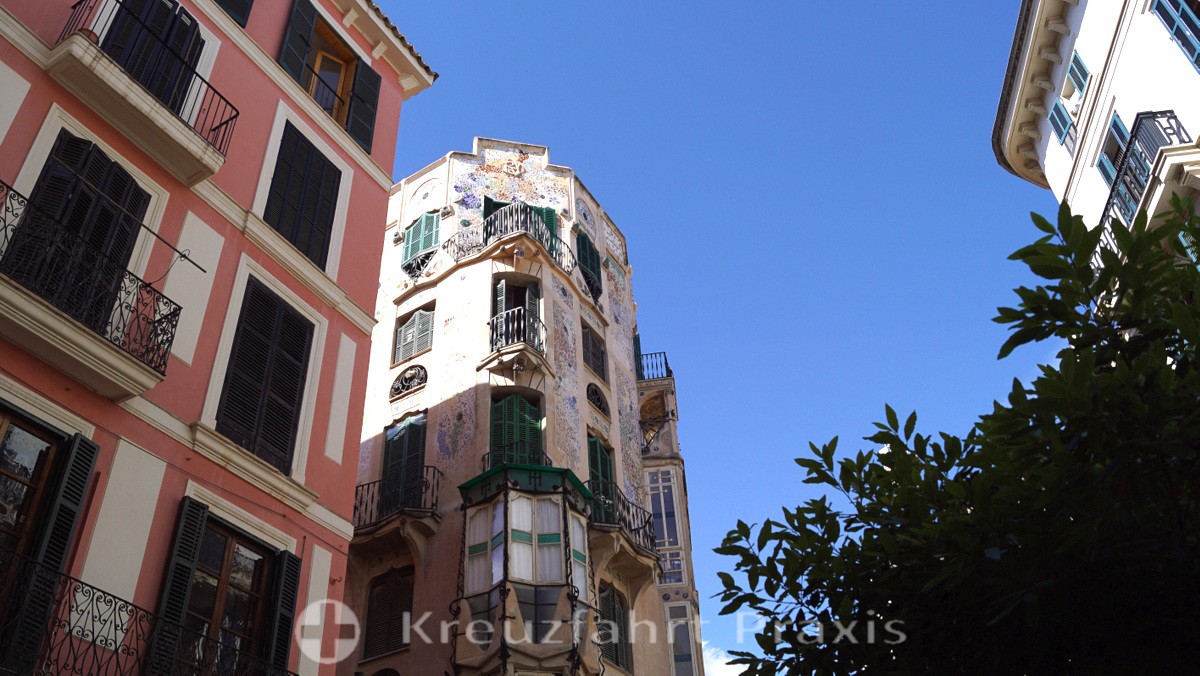 We like to see this place too. In the past, Plaça de Cort was the "zero" kilometer of Mallorcan roads. It is comparable to the "Monolith Kilometro Zero Argentina“In Argentina's capital Buenos Aires.

The Plaça is worth seeing because of two things: the historic town hall and its huge olive tree.

The baroque style "old" Town hall was created between 1649 and 1680. After a major fire in 1894, changes were made to the building. The work didn't hurt. The magnificent facade, the large balcony draped with flags and the window front are remarkable. As soon as the inside of the building is entered, the steep staircase of honor catches the eye. The plenary hall and the mayor's office are also worth seeing. 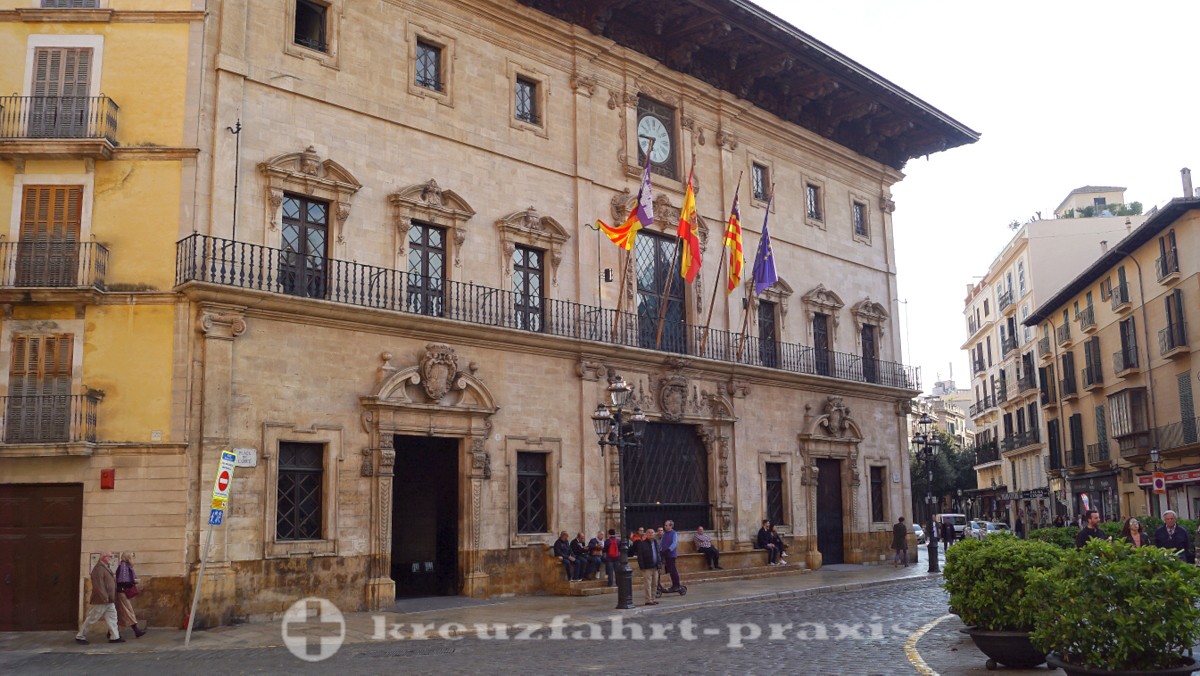 The age of the Olive tree on the Plaça de Cort is estimated at 500 to 600 years. The "Olivo de Cort" originally grew in the Tramuntana mountains. In 1999 it was transplanted in Palma's old town. The mighty tree, weighing several tons, withstood the move brilliantly. It bears fruit every year and delights passers-by and guests in the surrounding cafés with its bizarre shape and shadow. 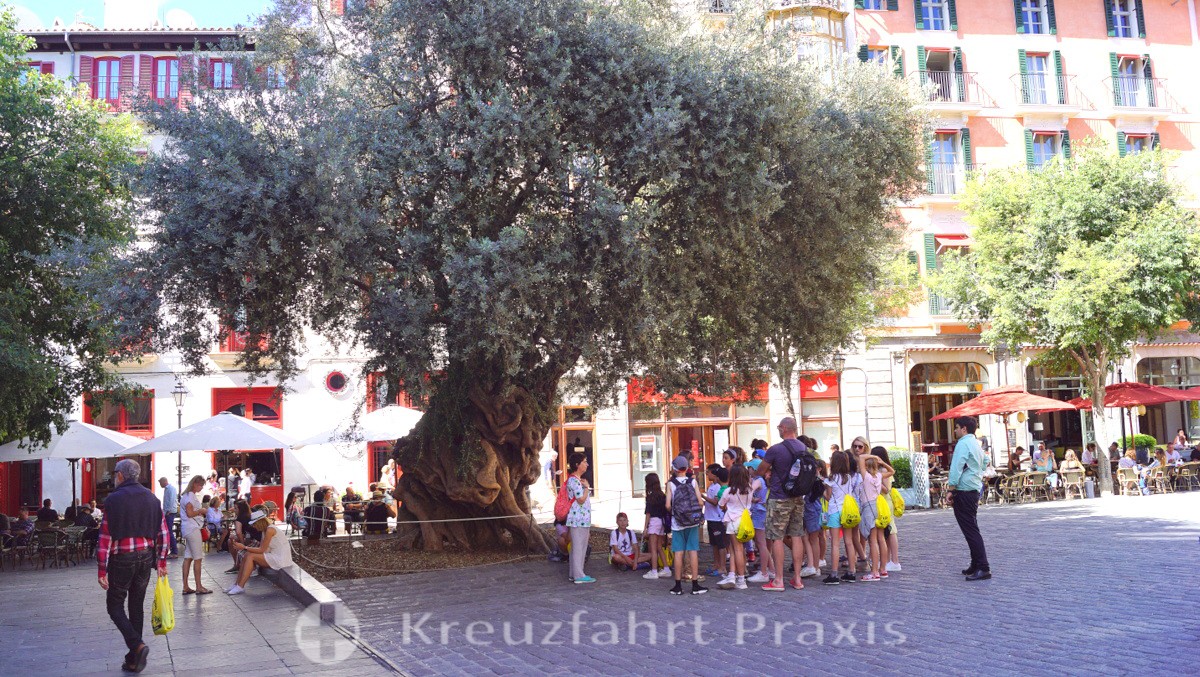 The olive tree of the Plaça de Cort

Our path continues to Plaça de Santa Eulalia, and at the Esglesia de Santa Eulalia past the Basilica de Sant Francesc. The second largest church in the Balearic Islands was built in the 13th and 14th centuries by order of the Franciscan order in Gothic style. A lightning strike destroyed the facade in 1580. The repair took place 100 years later in the Baroque style. A huge rose window takes up essential parts of the sober-looking facade. Inside the basilica is lavishly decorated. 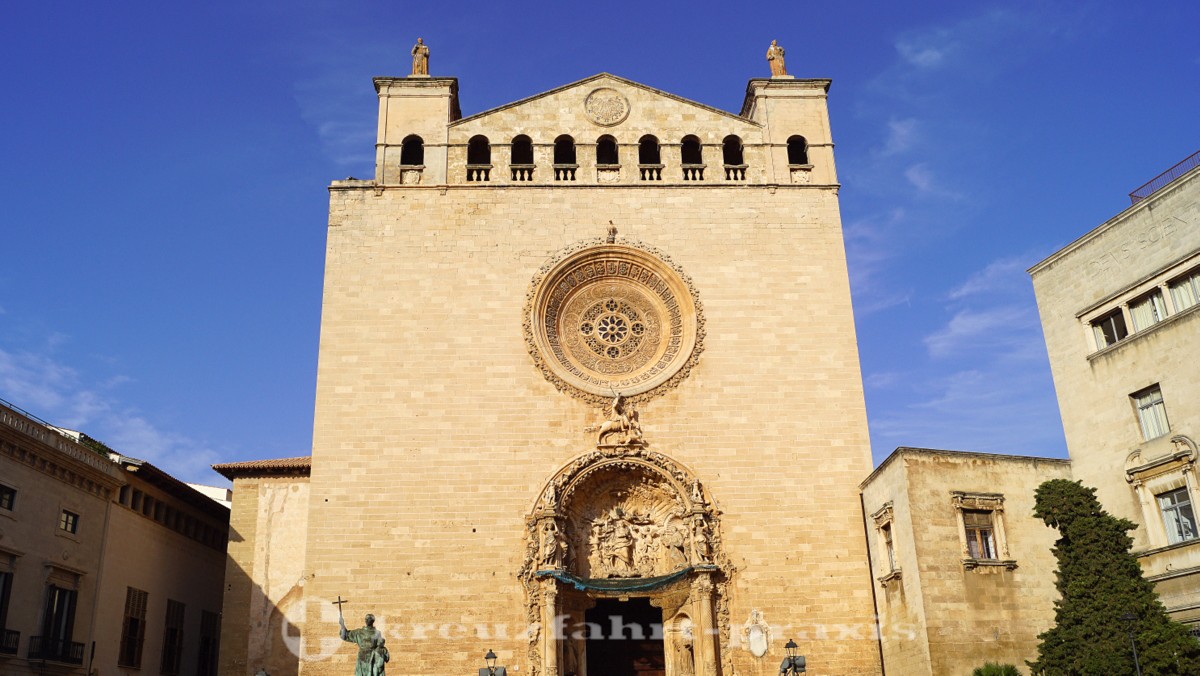 The church has a monastery and a cloister with a trapezoidal floor plan. The magnificent cloister with 115 slender columns is considered one of the largest in Europe. The monument in front of the entrance to the basilica shows the Franciscan monk Junipero Serra from Mallorca. Starting from mission stations, he founded Californian cities such as San Francisco, Los Angeles and Sacramento. 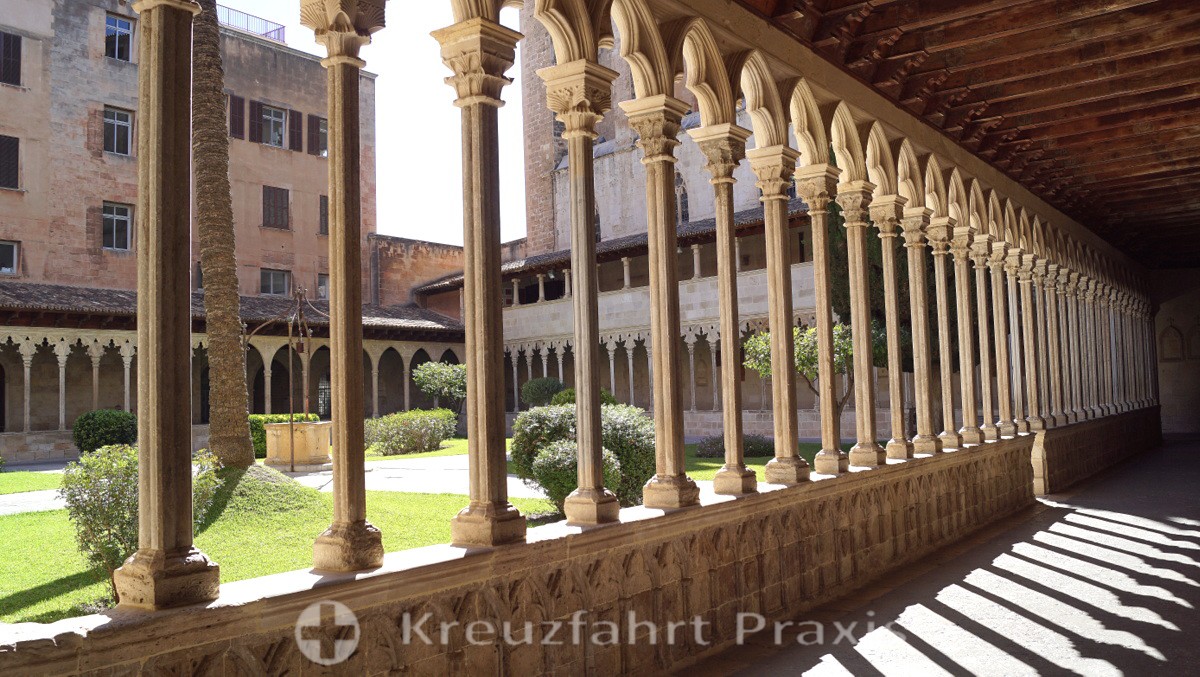 Cloister of the monastery of Sant Francesc

The Banys Àrabs remain hidden from most visitors to Palma. That's a shame: the Arab baths, built in the 10th to 12th centuries, are considered an important relic from the Moorish era. A small part of the originally large complex has been preserved. A video presentation informs visitors about the former design of the bathrooms in several languages, including German. A small garden in front of the rooms invites you to linger. 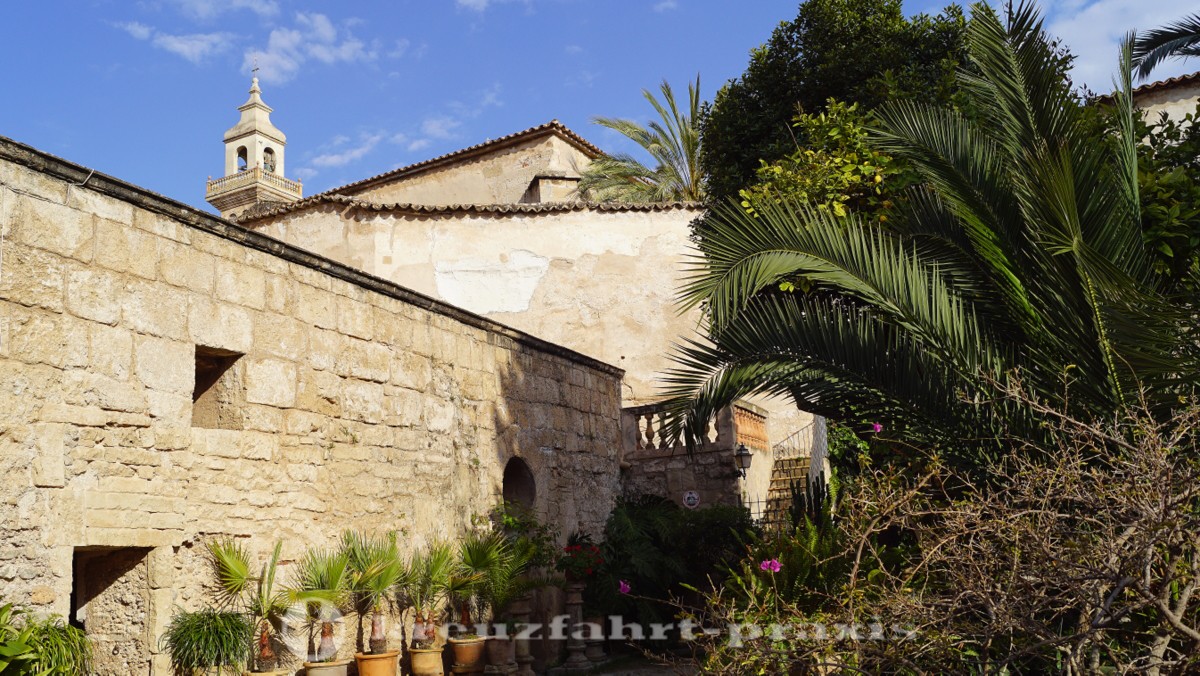 In the gardens of the Banys Arabs

From the Arab Baths we walk 400 meters through the mostly deserted streets and alleys of the old town to the La Seu Cathedral. It is the symbol of Palma. After more than 350 years of construction, the building of the church was provisionally completed in 1587. Further work was carried out in the following periods. The 110 meter long cathedral is considered one of the most valuable Gothic buildings in Spain. The 44 meter high central nave, the two 30 meter high side aisles, the magnificent furnishings and the light effects of the glass windows impress visitors at any time of the day.

Opposite the cathedral is another gem of Palma. It is the 20.000 square meter royal palace Palacio Real de La Almudaina. It is the seat of the military command; at the same time it serves as the residence of the Spanish king when he visits Mallorca. The building was originally a Moorish fortress.

After looking into the S'Hort del Rei, we cross Av. d'Antoni Maura and take a few steps through Carrer de la Boteria to Llotja. What is meant is the former trading exchange. Palma was an important trading center in the Mediterranean area in the 15th century. The splendid building of the Llotja was the meeting place for the merchants. The 46-meter-long and 28-meter-wide structure consists entirely of one huge, bright room. We think: You should definitely see, if open! 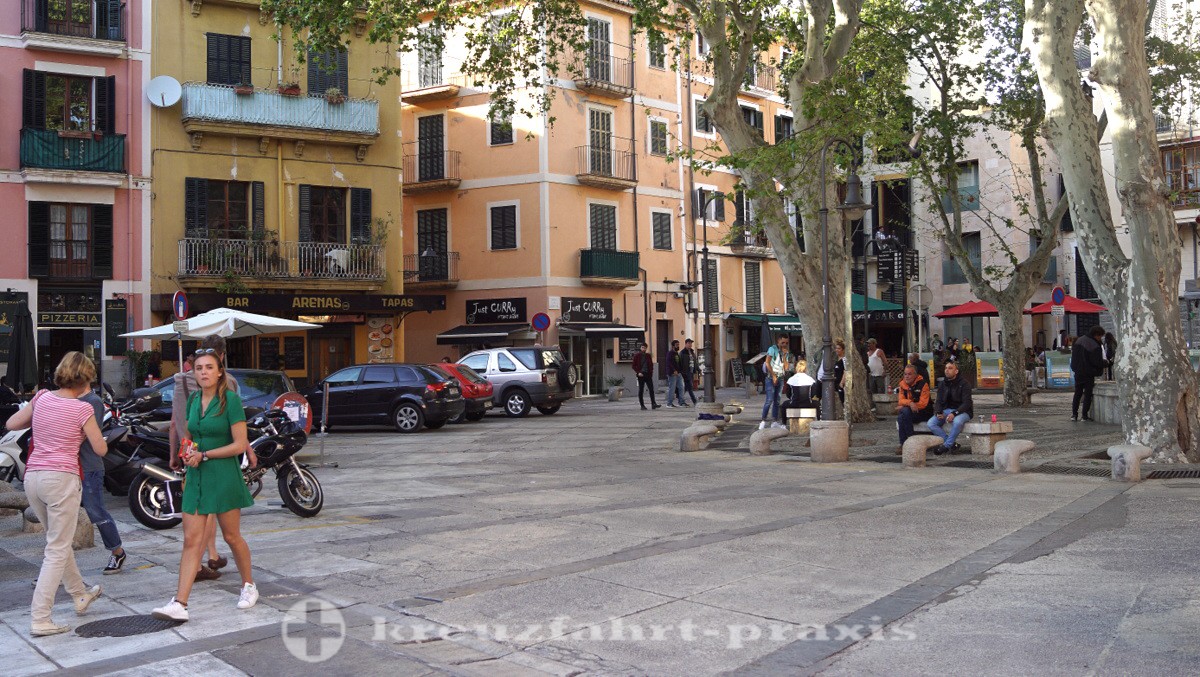 We leave Llotja, pass Plaça Drassana and continue towards Plaça de la Porta de Santa Catalina. Our destination is the Es Baluard Museum. It is one of the most famous and largest museums in Mallorca and a haven for modern and contemporary art. Over 500 works by local and international artists are exhibited. The museum is part of the former fortress of Bastió de Sant Pere.

The Plaça de la Porta de Santa Catalina “shines” with an unusual art installation. Dennis Oppenheim's upside down church is shown. The referential title is: "Device to Root Out Evil". The "device to eradicate evil" fights the demons in hell with the church tower stuck in the ground, said the artist. Other art installations in the square are two giant pigeons. We like to look at them too. Our tour ends at Plaça de la Porta de Santa Catalina.

Our conclusion: If you follow our footsteps through Palma's old town, you will get to know many sights in a short space of time. By the way: on our walk we covered less than three kilometers.