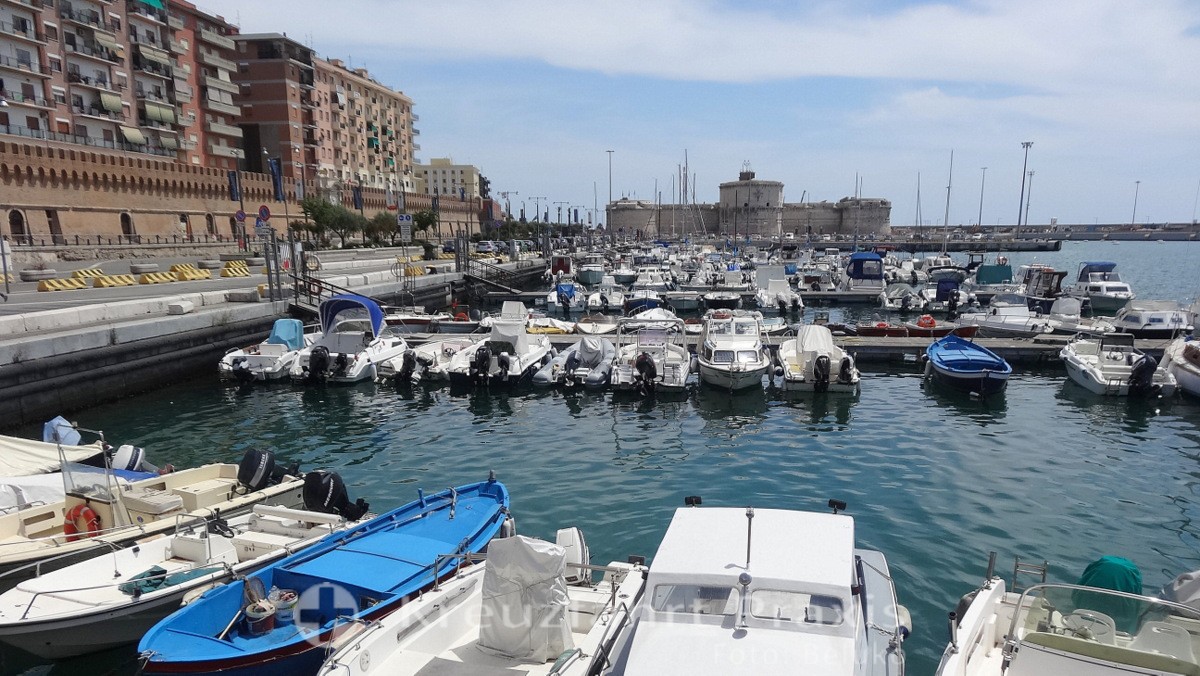 Civitavecchia, Rome's port, is Italy's largest and most important cruise port with 2,4 million passengers (as of 2018). The city with more than 52.000 inhabitants belongs to the metropolitan city of Rome, the former Italian province of Rome. The two cities are separated by around 80 kilometers. Civitavecchia stands for "Old City". And before we forget: Civitavecchia is the home of the digestif Sambuca. 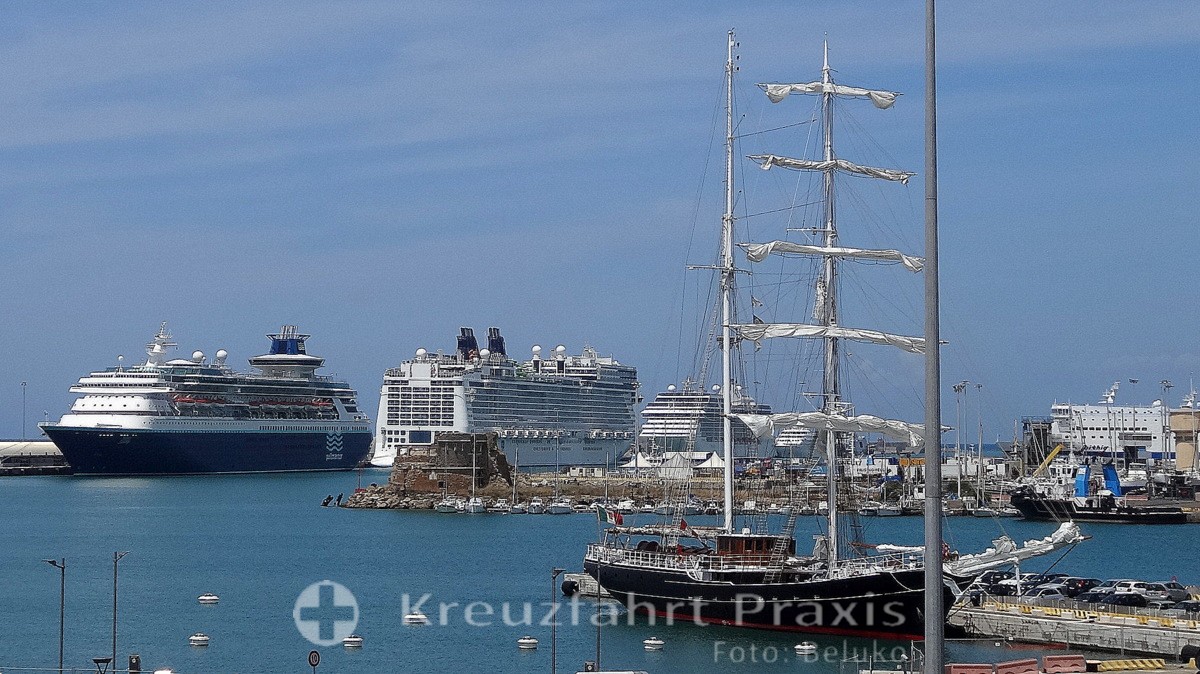 Cruise ships in the port of Civitavecchia

Civitavecchia - once a naval port of the papal papal state

Between 107 and 110 AD, Rome's Emperor Trajan built a port in a sheltered bay of the Tyrrhenian Sea. The Romans called the place Centumcellae. Presumably in the 4th century this parish became a bishopric. A Roman contemporary witness described the settlement as the only flourishing coastal town north of Rome. 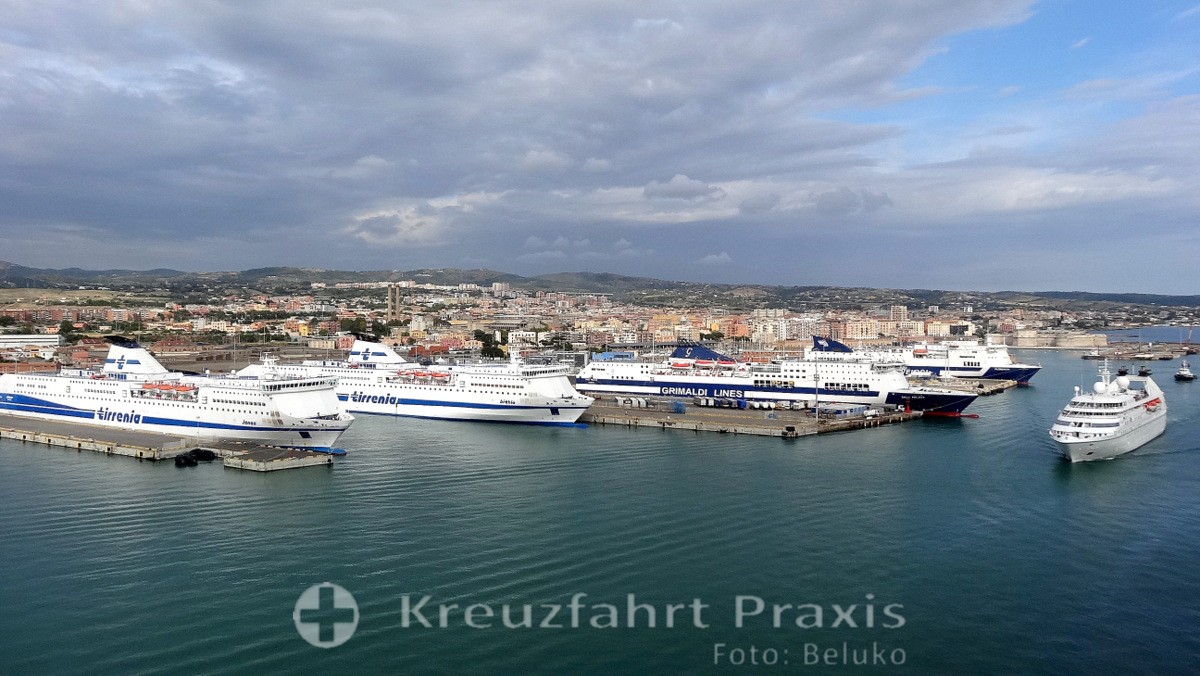 Cruise ships in the port of Civitavecchia

That changed when the Saracens attacked and destroyed the city in 812. It is true that the Saracens gave up the port city in 849 after the naval battle of Ostia; thereafter Centumcellae remained destroyed and uninhabited for a good 150 years. Reconstruction began around 1000. Since then, the name Civitavecchia has caught on. The city was the naval port of the Papal States.

During the Second World War, Civitavecchia was destroyed again. Allied bomber units inflicted severe damage on the city. Nothing of the damage can be seen in today's cityscape. 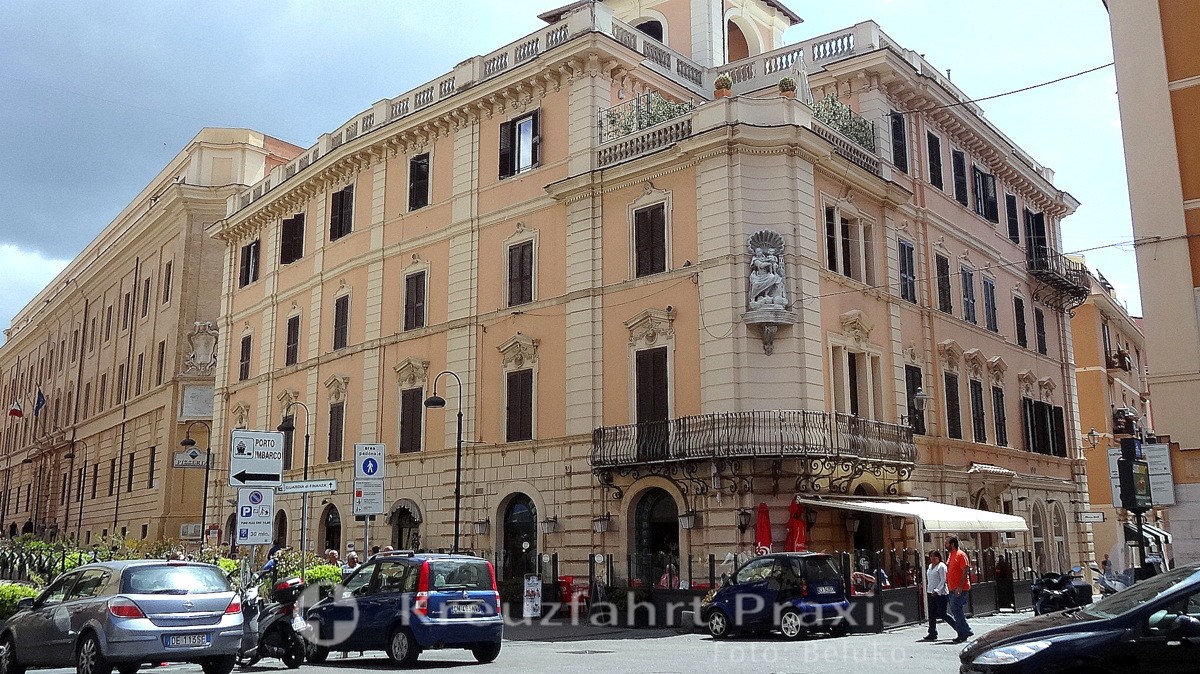 Civitavecchia in the present 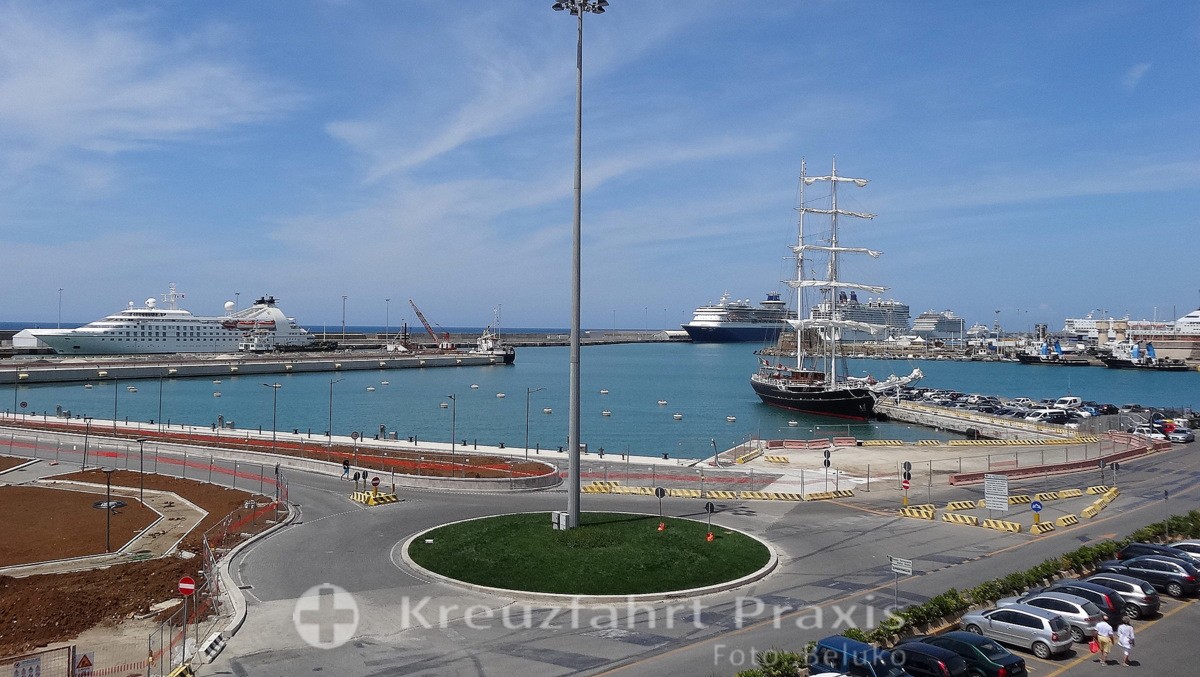 In addition to the port industry, Civitavecchia is home to two universities, with faculties for mathematics, physics and natural sciences as well as for medicine, economics and engineering.

In 1869, the well-known American writer Mark Twain rated Civitavecchia as follows: “This Civita Vecchia is the finest dirt nest and domicile of vermin and ignorance ... These alleys are paved with stones and covered with a carpet made of dead cats, rotten There is rags, rotted vegetable waste and the remains of old shoes, everything is soaked in dishwater, and people sit around on stools and enjoy it ... Some of the men go to the military, the others become priests and the rest become cobblers ... Here there are there is nothing to see ".

As described by Mark Twain, it may have looked like Civitavecchia 150 years ago. In the present, the city looks clean and tidy. Only a few day guests are aware of this. For most passengers, Civitavecchia is the start or end point of a cruise or a stopover for a trip to Rome. The port city does not even come close to the abundance of sights of the "Eternal City". Nevertheless, there are many interesting things to discover in Civitavecchia.

The landmark of Civitavecchia is the Forte Michelangelo fortress at the port. The monumental building originally served to defend the port of Rome. Pope Julius II ordered the fortress to be built. The work was carried out between 1508 and 1539. Well-known contemporary architects were involved in the construction. Even Michelangelo Buonarroti, the most important artist of his time, contributed a design for one of the towers. The Papal States ruled over the fortress until 1870.

The fortress is entered from the side of the octagonal tower. Inside there are dozens of bunkers and a rectangular inner courtyard with arcades.

Another attraction of Civitavecchia is the old city wall, reinforced with battlements. It runs along the historic waterfront. A remarkable sight is that Vanvitelli Fountain. Pope Benedict XIV commissioned the well made of travertine. The defining detail of the fountain is the faun spouting water.

The single-nave cathedral, dedicated to St. Francis of Assisi, is Civitavecchia's largest church. The church, built on the foundations of a former monastery, is located in the historic center of Civitavecchia, not far from Forte Michelangelo. It was built at the beginning of the 17th century. In 1805 the church became a cathedral. Compared to other Italian cathedrals, the interior looks rather simple. The stained glass windows, the beautiful frescoes and the statue of St. Firmina are charming.

Outside the city center, at the Civitavecchia-Nord motorway exit, are the Taurin thermal baths. The former Roman bathhouse is also under the name Thermae of Trajan known. The most important visitors to the bathing establishment were the Roman emperors Trajan and Marcus Aurelius. The facility is open to visitors.

The two urban destinations are good addresses for those Italian moments in life: The Corso Centocelle, Civitavecchia's pedestrianized shopping mile, invites you to stroll and rummage. At one point, glass windows are let into the sidewalk. Underneath are ancient ruins.

The covered one Mercato di Civitavecchia at the Piazza Regina Margherita offers traditional regional products and goods of all kinds. The fish market takes place daily in an adjacent hall. 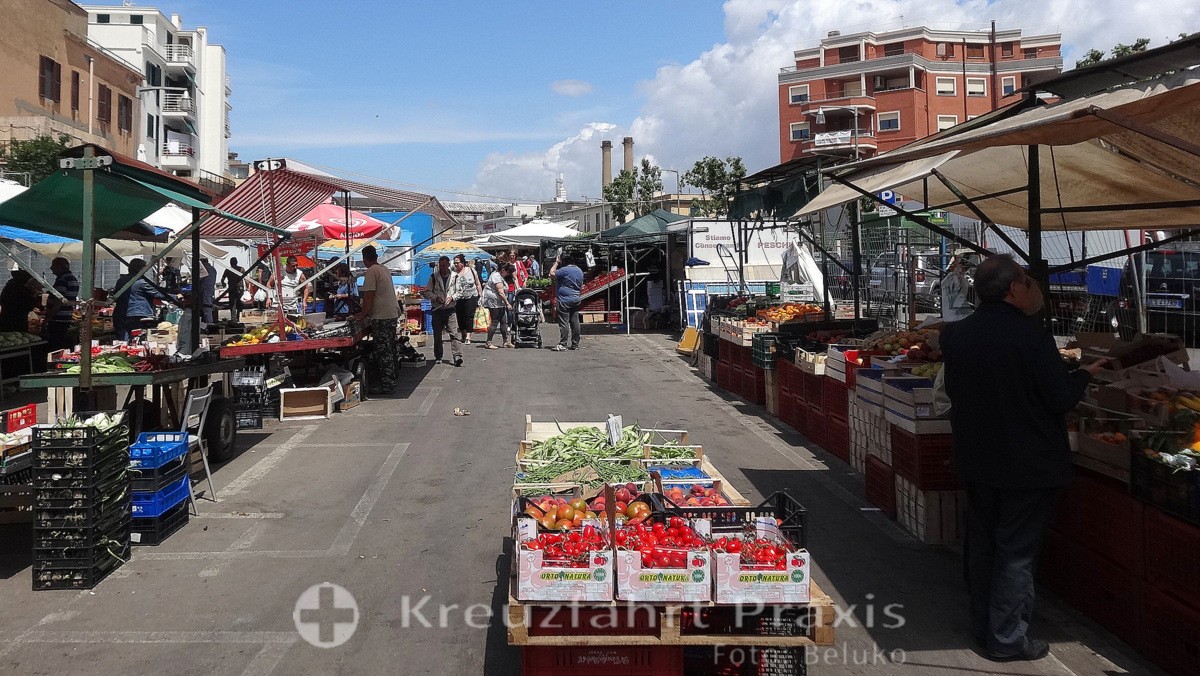 Civitavecchias beach with the seafront promenade

The lake promenade begins behind the Forte Michelangelo. On the sprawling Piazza della Vita a lot is offered to locals and visitors. Bars, kiosks, play equipment for children, rides, temporary exhibitions and more. 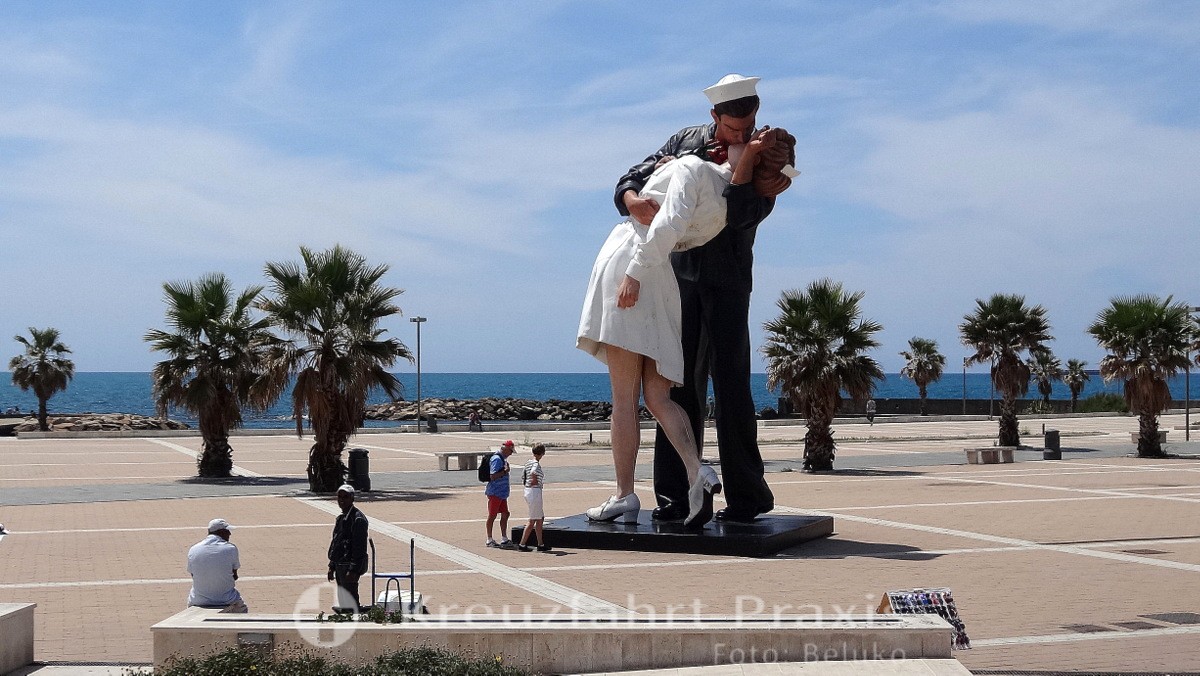 Variants of the monumental work of art can be found in San Diego, Key West and other places around the world.

The beach of Civitavecchia, which is several hundred meters long, ends at the former bathhouse Pirgo. Colloquially, the Pirgo beach spoken. The beach section mixed with stones is not ideal for swimming.

Cruise ship passengers who have opted for individual excursions in Civitavecchia take free shuttle buses to the stop in front of Forte Michelangelo.

Those ship guests who are planning an individual tour with the Trenitalia train to Rome walk ten minutes to the train station. Tickets can be bought from machines or at the counter.

For more details on the train journey to Rome, see Take the train from Civitavecchia to Rome.

In addition to the expensive shuttle buses operated by the cruise companies, inexpensive minibuses to the center of Rome or to Rome's Fiumicino Airport are offered in Civitavecchia at the port exit.