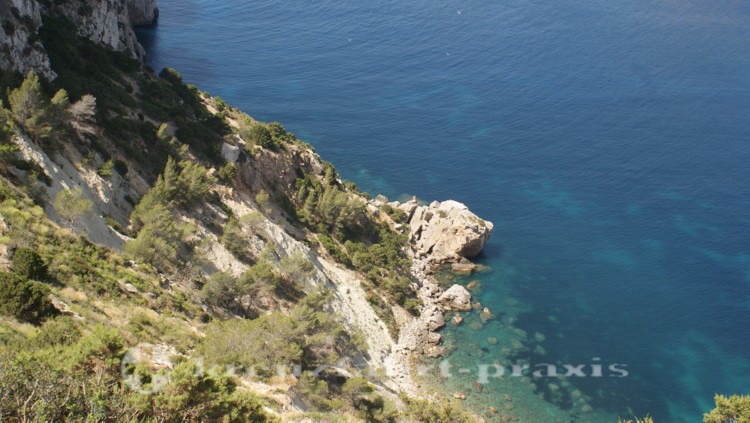 Our cruise ship that Celebrity Reflection, moored for a day stop in Ibiza's island capital Eivissa at the Botafoch quay. We take the paid shuttle bus to the Estación Maritima in the city center. At a rental company, the Mini Countryman ordered in advance is ready for a tour of Ibiza's south and east. 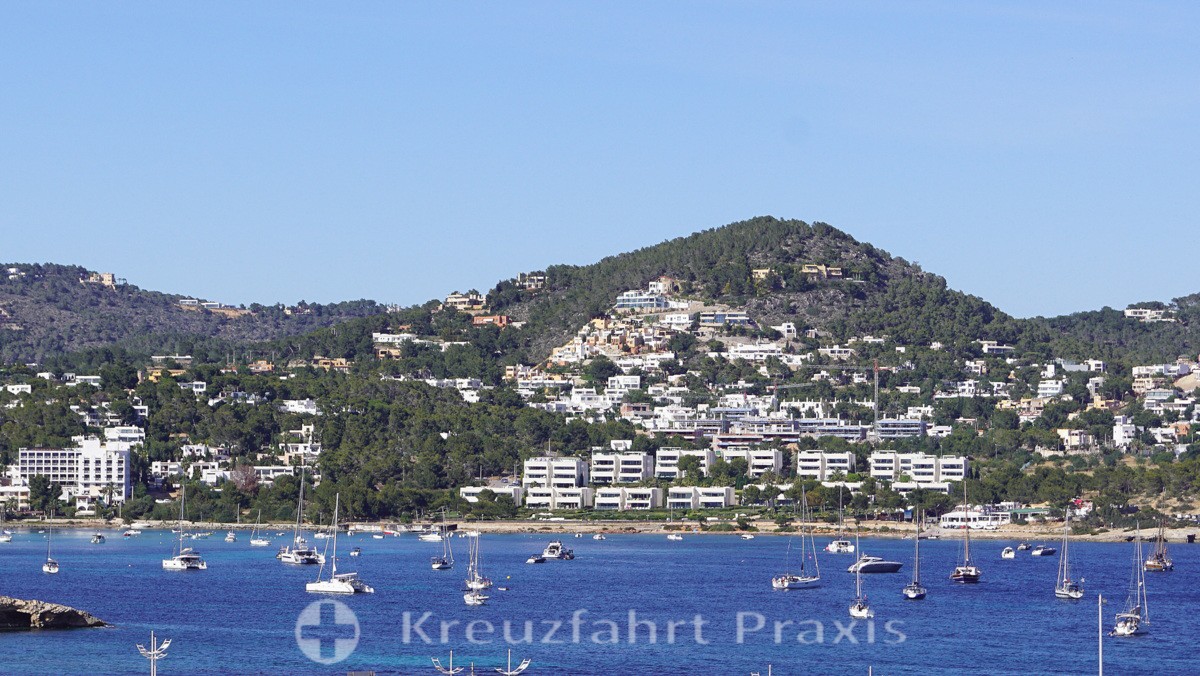 The first destination of our tour is the nearby beach and party home of Playa d'en Bossa. The place has the longest beach on the island, and Playa d'en Bossa is internationally recognized as the center of the club and party scene. There are hotels, beach bars and beach clubs galore. At night, party-goers celebrate in bars and hip clubs. In contrast, mornings are quiet and peaceful. Not much is happening on the beach, which is over two kilometers long; the clubbers are apparently still in the springs. 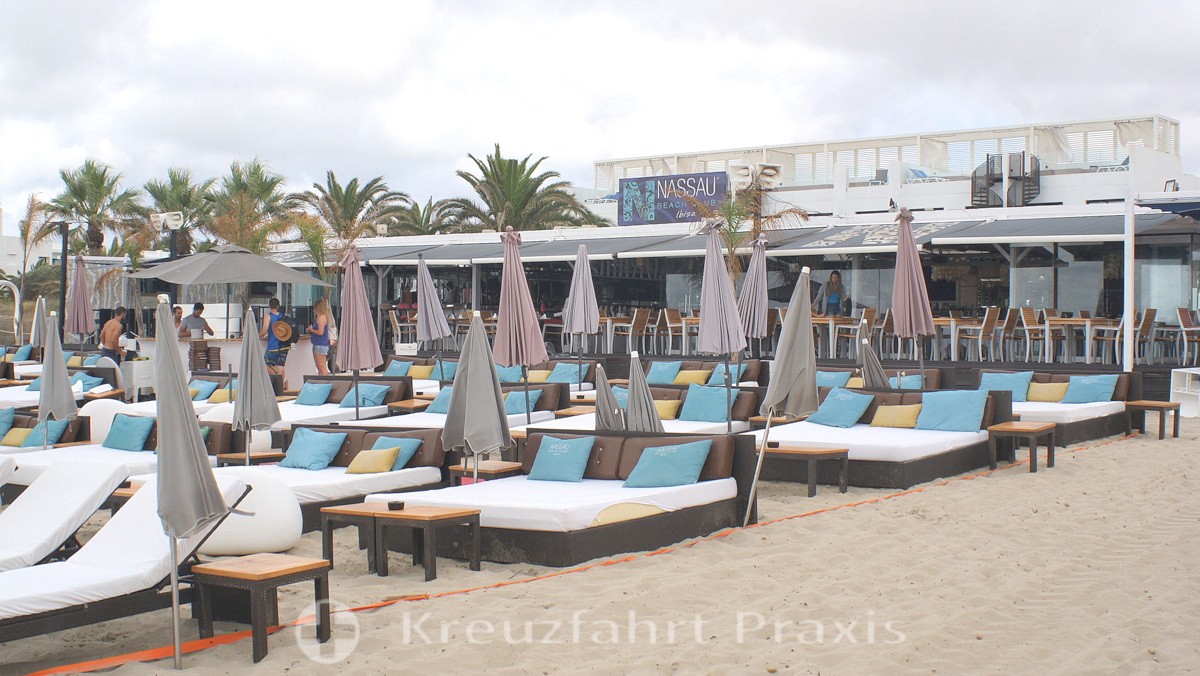 Playa d'en Bossa in the morning 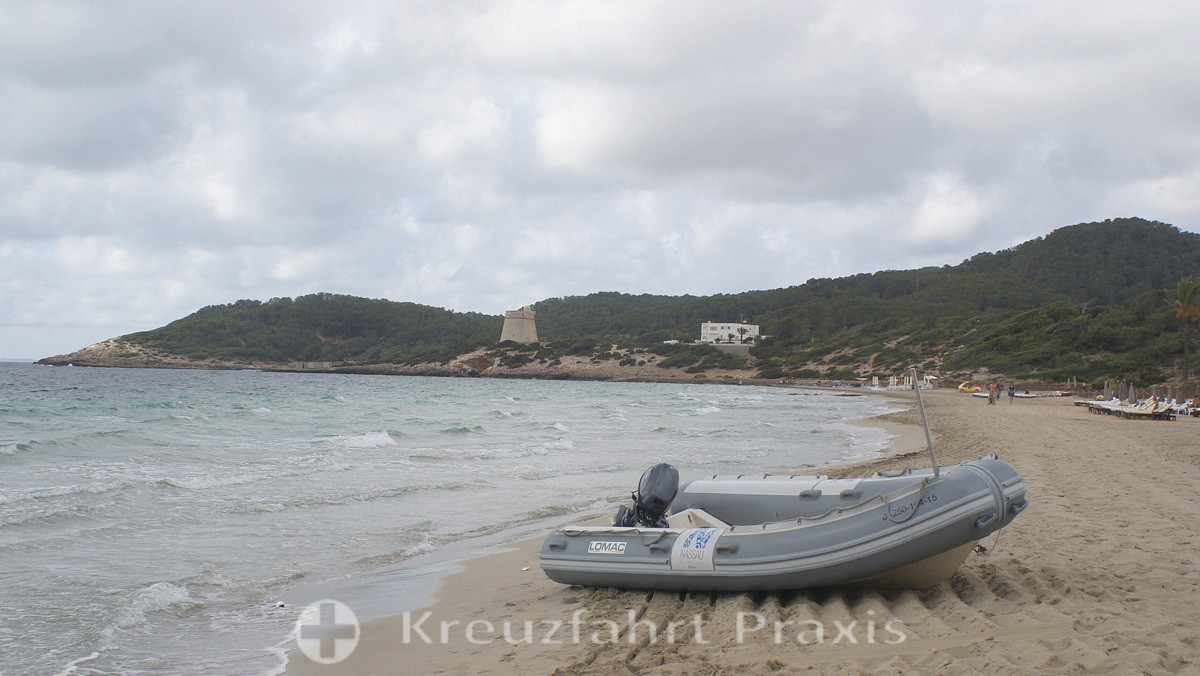 We change over to the Parque Natural de Ses Salines d'Eivissa i Formentera. Sea salt is extracted on 450 hectares. Salt production (65.000 tons in 2016) was established a long time ago by Phoenician settlers. The Carthaginians settled in Ibiza in the seventh century BC. 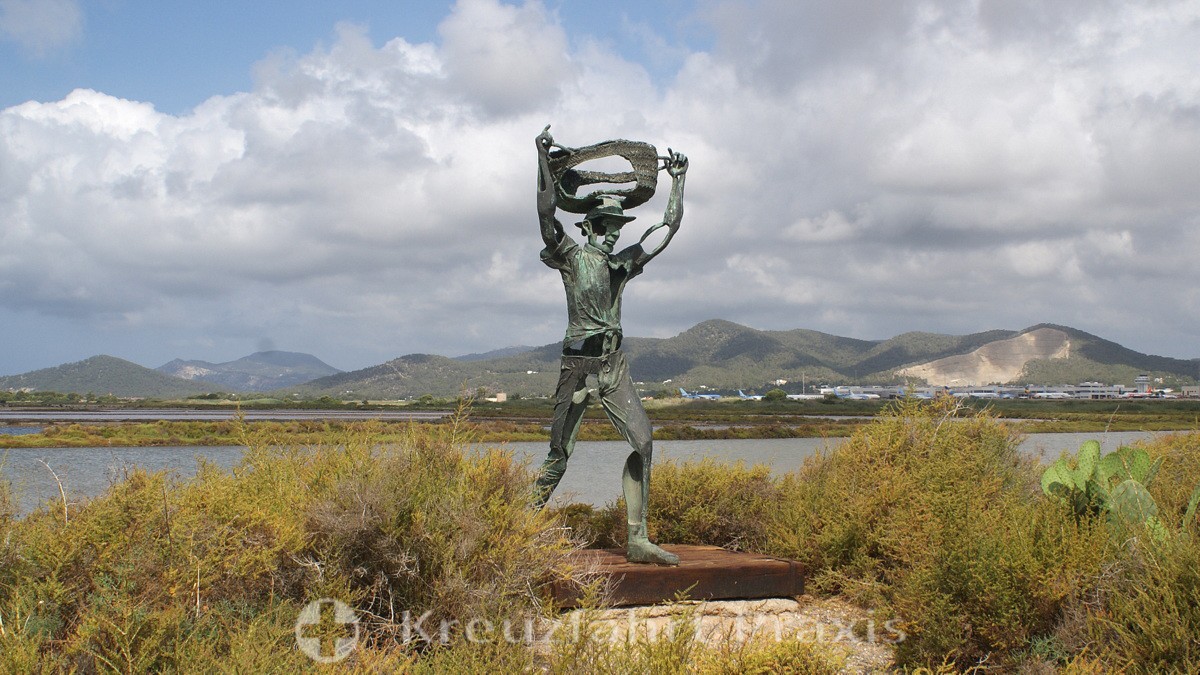 Monument to the miners 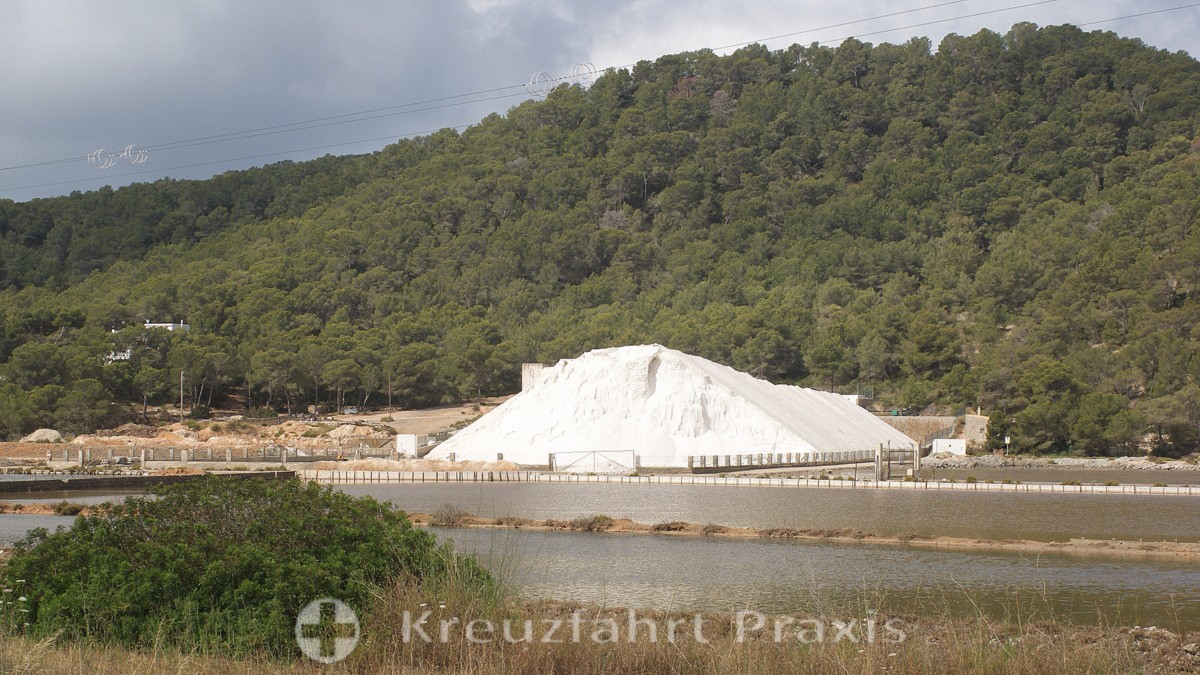 The nature reserve includes the island's salt flats, the north of the neighboring island of Formentera and the marine region in between. The ecosystems of the dunes, beaches, swamps and coasts as well as the old salt pans have been protected since 2001. The seagrass meadows in the natural area had already been protected by UNESCO World Heritage.

With the Platja de Ses Salines, the region has a well-frequented, narrow sandy beach. Our interest is not aroused by the beach but by the salt pans and the huge salt mountain lying there. The salt is mainly exported to Northern Europe, where it is used as road salt and in fish processing. 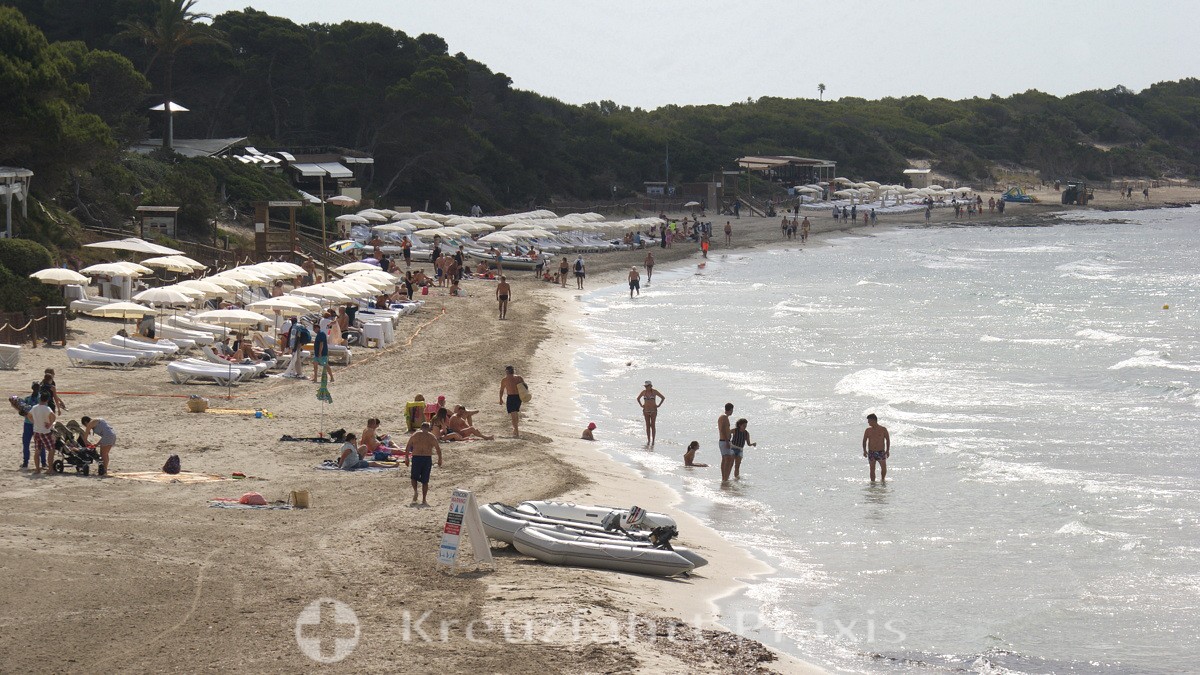 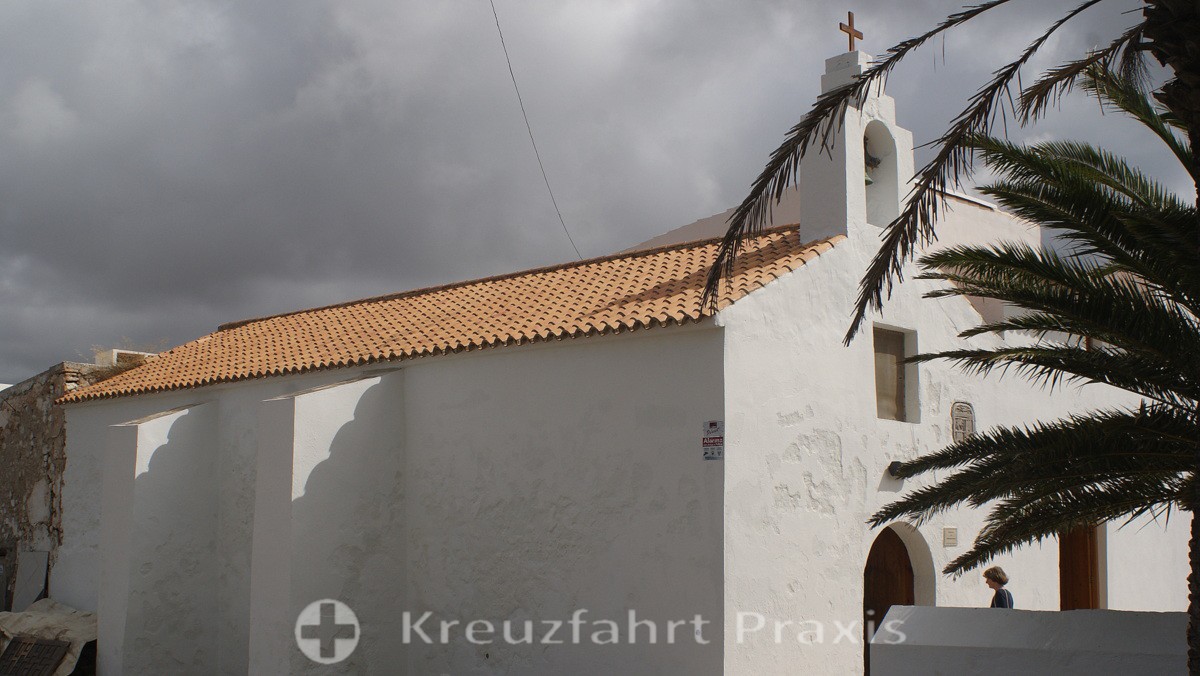 The small church of Sant Francesc, located in the salt flats, is open. It was built in the 18th century as a prayer room for the workers of the salt pans. On the facade there is a cross carved in stone with the inscription Castilla y Leon 1771.

The rock island of Es Vedrà

We have seen enough of the salt pans, we follow our route leading through the charming landscape of the south coast. Our next destination is the rocky island Es Vedrà, which towers out of the sea off the west coast. Its highest point reaches a height of more than 380 meters. The island, which has been designated a nature reserve, is uninhabited except for a few goats. A myth has it that Es Vedrà is the tip of the sunken city of Atlantis. The rock is also associated with UFOs. 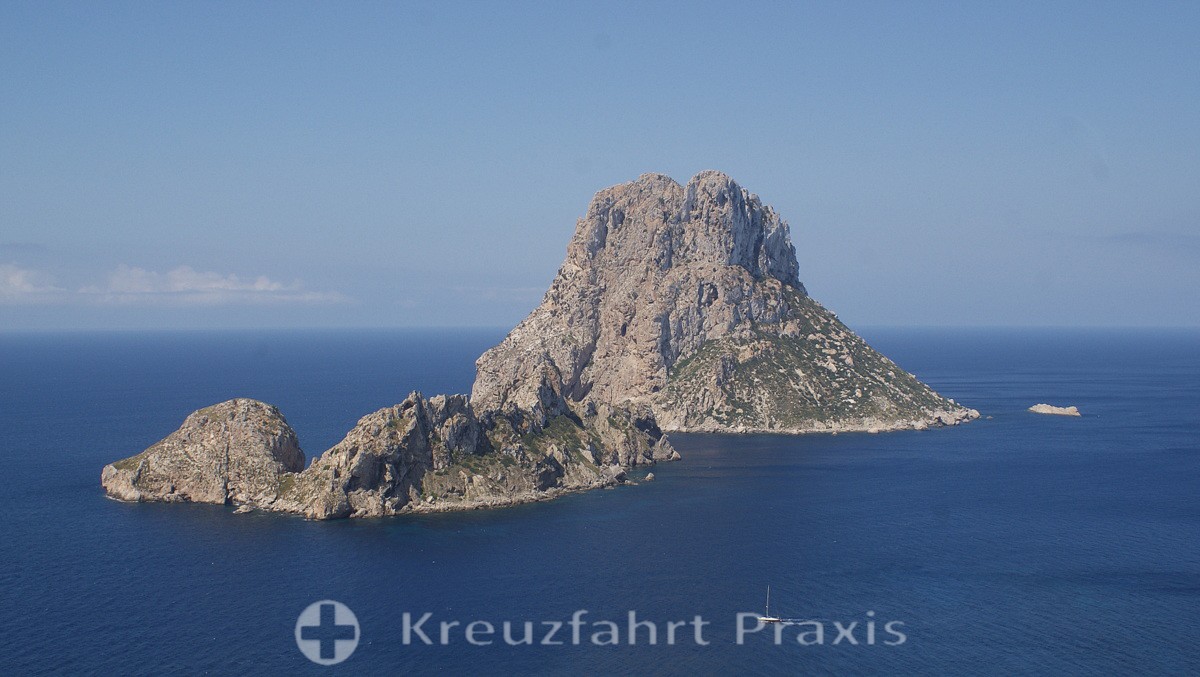 To see the island and the islet Es Vedranell in front of it, we follow the sign “Es Vedrà” on the road. A side road leads to an unpaved parking lot. From there we go ten minutes; afterwards we are rewarded with a unique view of the islands.

Es Vedrà is followed by the small town of Sant Josep de sa Talaia with more than 25.000 inhabitants. The spotlessly clean place has a town hall, a few banks, restaurants and shops in the center of the village. The centrally located parish church is of some importance. The church, built in the first half of the 18th century, has a rectangular vestibule with three round arches. Barrel-like vaults are attached to the main nave on both sides. Noteworthy is the altar, which is a replica of the original burned at the beginning of the Spanish Civil War. Sant Josep is one of the largest churches in Ibiza. 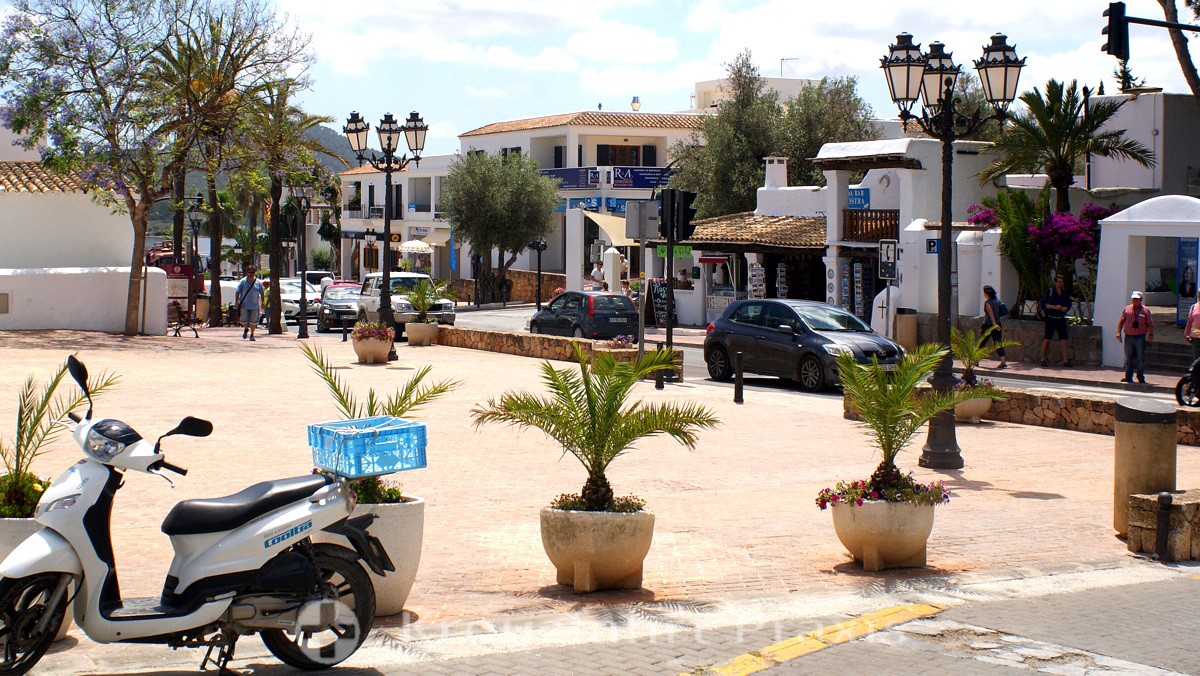 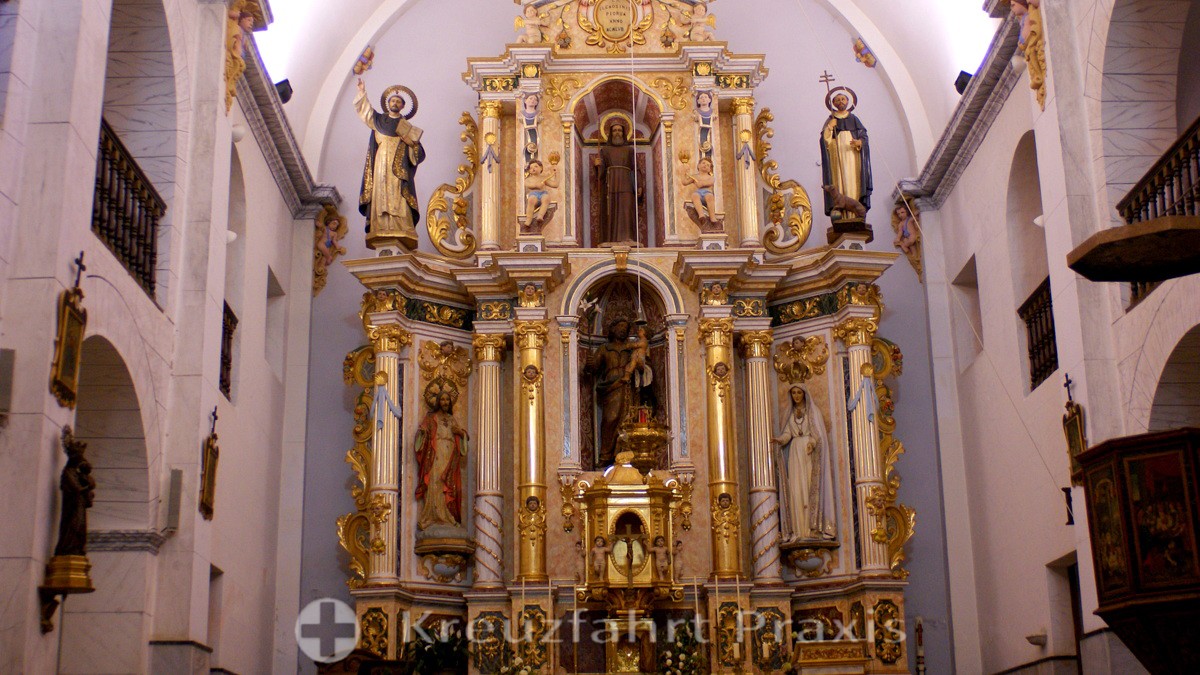 Nave of the Sant Josep Church

Another church is on our agenda. It is located in Agustí des Vedrà, south of the cost town of Sant Antoni de Portmany. The hamlet is said to be one of the most pristine and intact communities on the island. Viticulture is carried out in the vicinity of the place. The construction of the simple parish church began in 1786. It was only consecrated 20 years later. We cannot enter the church; it is locked. 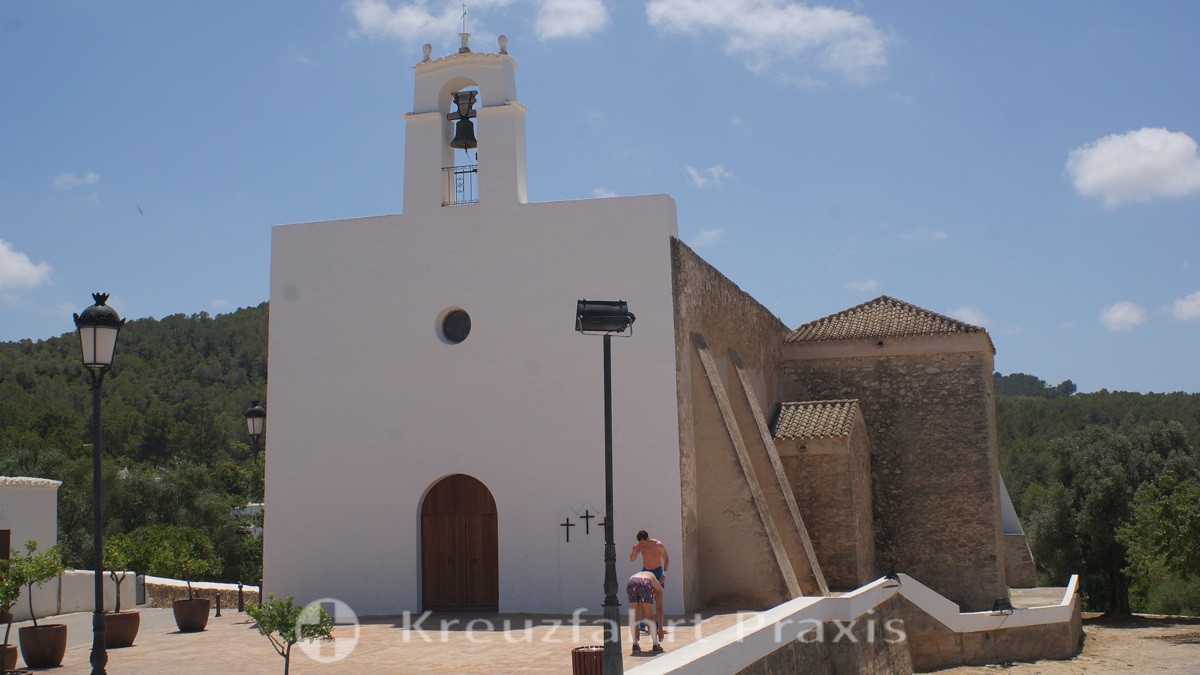 After Agustí des Vedrà we visit Santa Gertrudis de Fruitera. The municipality is located in the middle of the island. 2.500 residents live in the former farming village, many of them foreigners. The town center looks neat and spacious. We see bars and restaurants, fashion stores, galleries and antique shops. We allow ourselves a break in an ice cream parlor. The parish church is also not open. It's a shame, the inside of the church looks interesting and inviting in the photos we have. 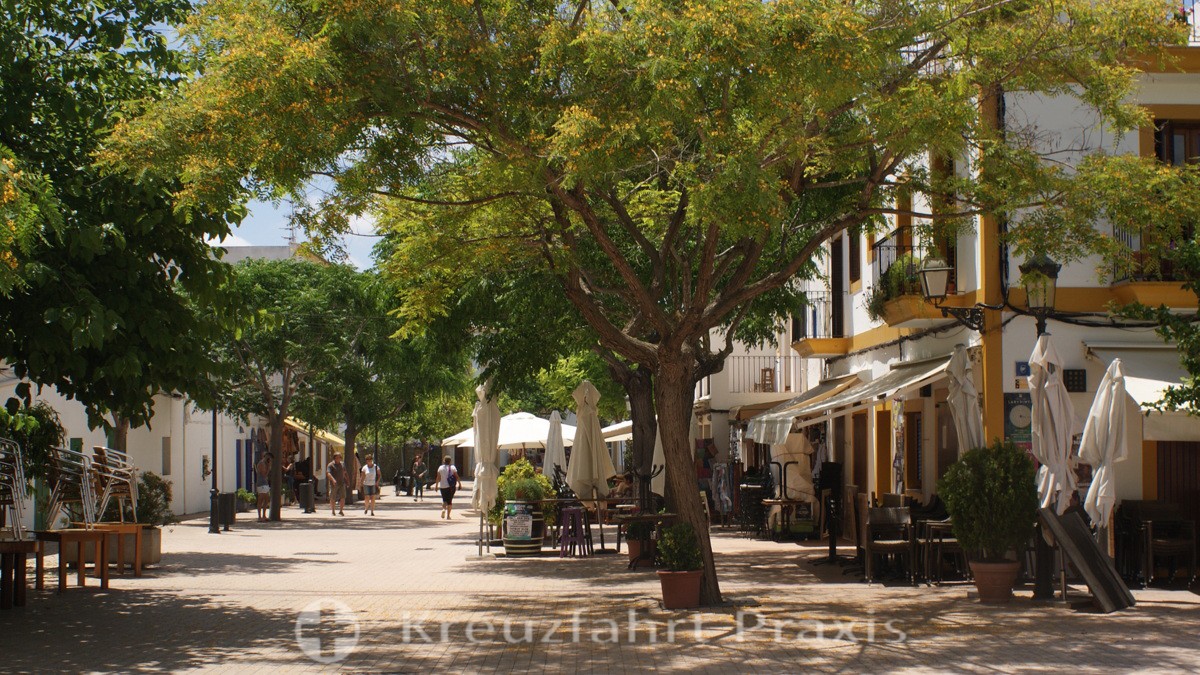 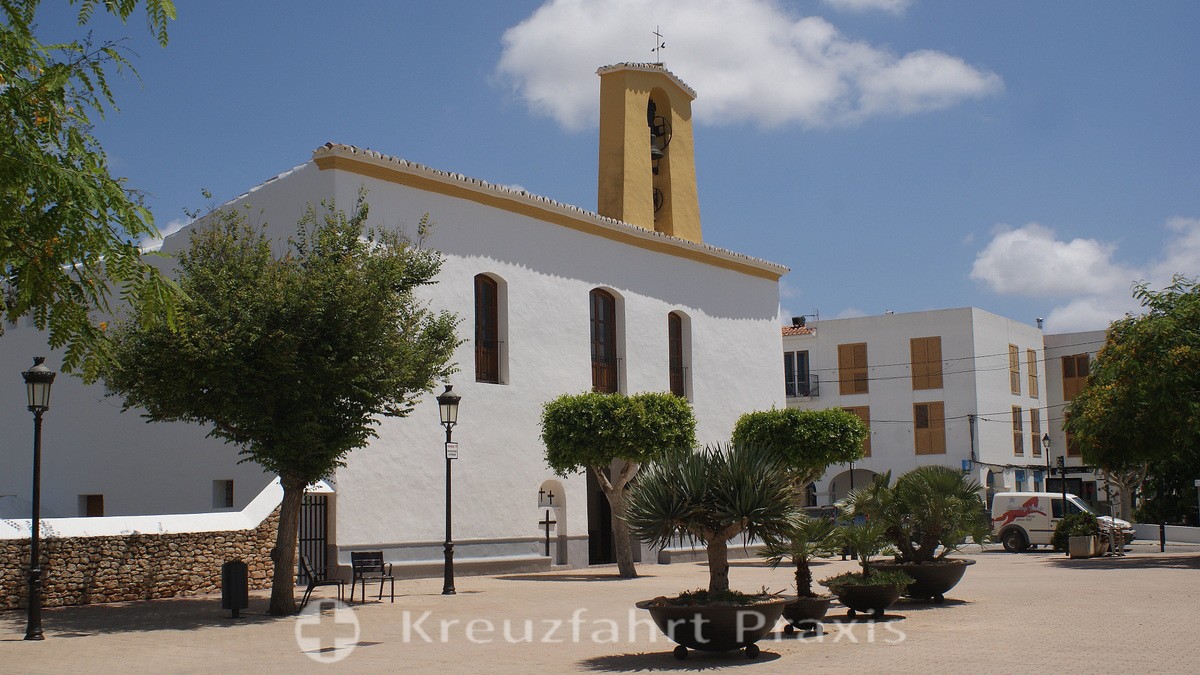 The bay of Cala Llonga

Before we return to Eivissa, we make a detour to the bay of Cala Llonga. To get there we cross a wonderful stretch of land, pass Santa Eulalia del Rio and reach Cala Llonga. 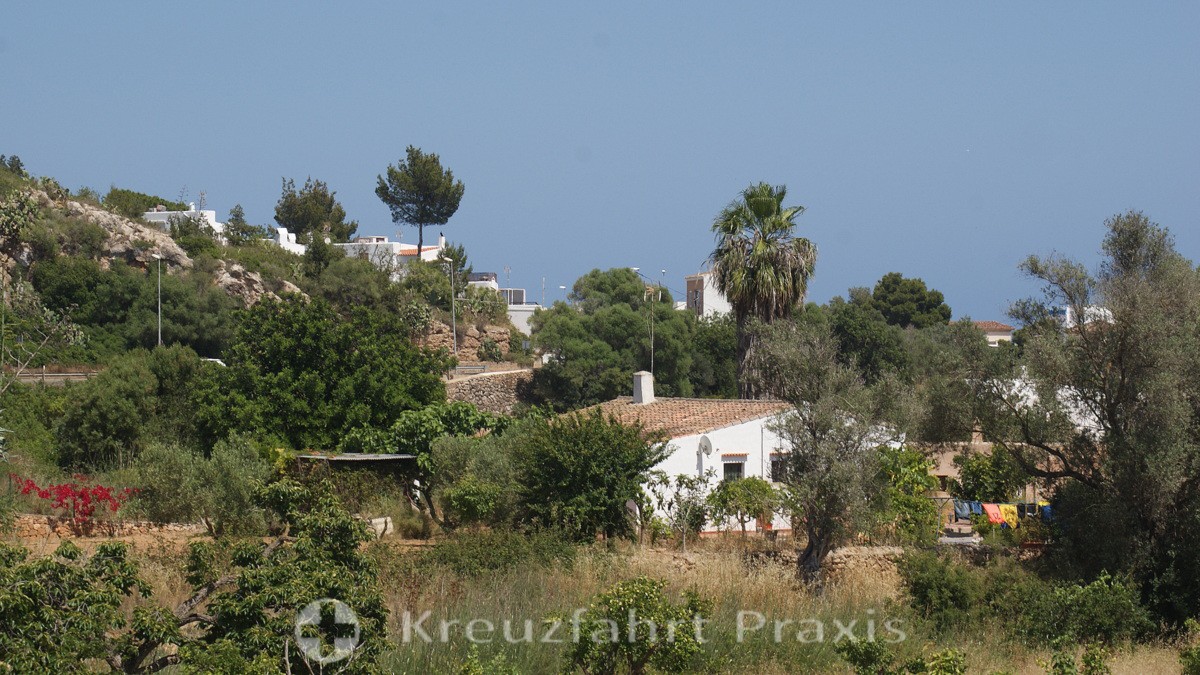 The bay cuts deep into the land between huge cliffs. An expansive stretch of beach offers space for hundreds of visitors. At the beginning of June the arrangement of the loungers looks generous. We don't want to stay there in the main season. The hotel complexes adjacent to the beach are not very attractive. In these large castles, the emphasis was placed on quantity and less on quality. 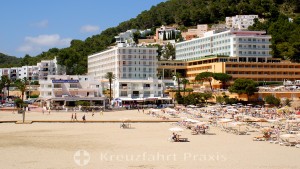 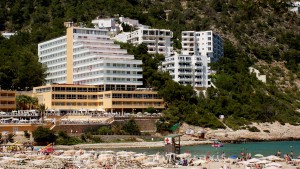 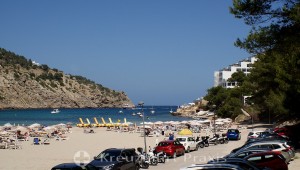 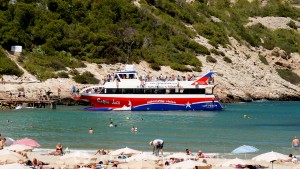 The direct way back to Ibiza Town. On Ibiza's main roads, it is great to drive and make rapid progress. We give the Mini Countryman back to the landlord and walk a few more steps through town. At the Estación Maritima next to the Club Náutico, we take the shuttle bus back to Celebrity Reflection. A beautiful, untroubled day on land is drawing to a close. Ibiza is an appealing, scenic day's stage on cruises in the Mediterranean.