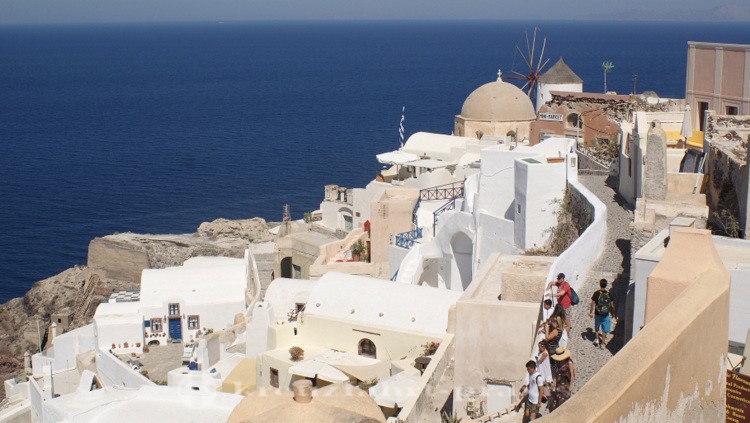 The name Santorini comes from the time when the republic Venice ruled the islands of the southern Aegean at the beginning of the 13th century. The name of the early Christian basilica Santa Irini near present-day Perissa became synonymous with the entire island. 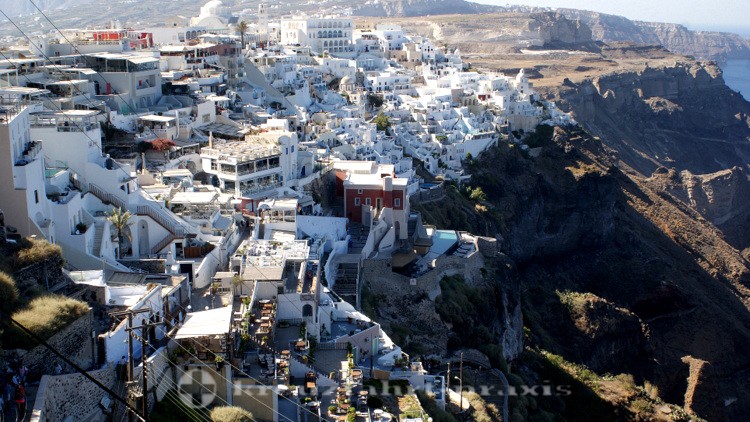 The Santorini archipelago was formed after violent volcanic eruptions, which probably started about 1,6 million years ago in the Aegean Sea. Further eruptions originally created an island with an estimated diameter of 16 kilometers. However, Santorini did not get its present form until about 3.600 years ago, when the island collapsed as a result of renewed volcanic activity and a more than 80 km² large and up to 700 meters deep caldera was created. 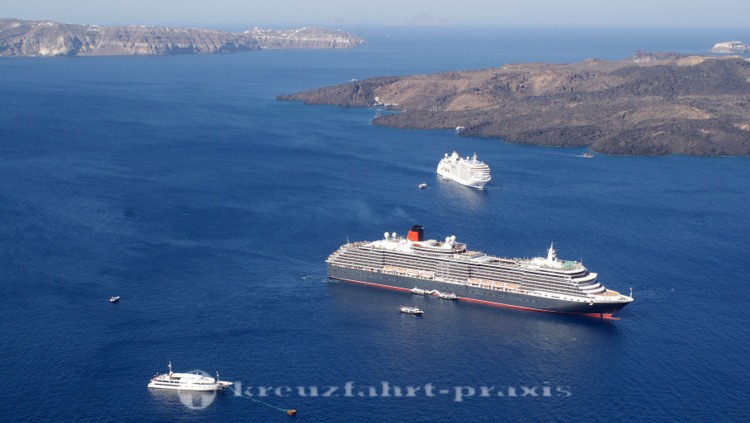 It is ring-shaped from the main island Thira and the islands Thirasia and Aspronisi surround. In the center of the water surface are the remains of the volcano, the two islets Palea Kameni and Nea Kameni. The archipelago also includes the remote island Christiana and the Columbos underwater volcano. The caldera is one of the most famous volcanic craters worldwide because of its unique beauty. 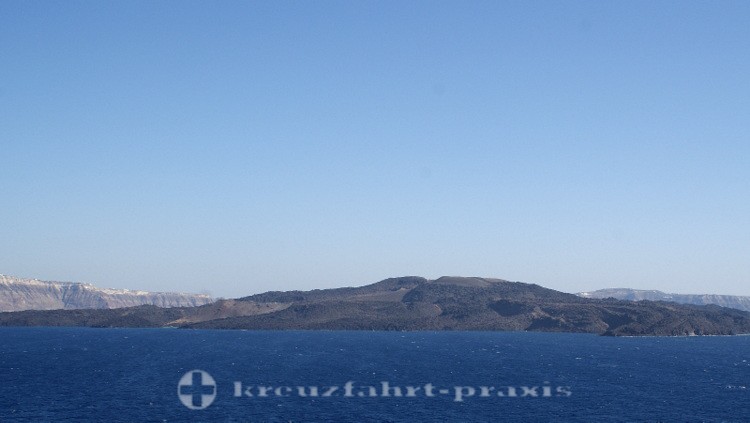 Santorin - The caldera with the island of Thirasia

The total area of ​​the islands of the small archipelago is a little more than 92 km². The main island Thira accounts for 79 km². Whose capital and at the same time largest place is Fira. 1.600 people live there permanently. The one in the north of the island Oia has a little more than 1.200 inhabitants including all incorporations. Between the northern tip (Cape Mavropetra) near Oia and Cape Exomitis in the south near Perissa are 17 kilometers. 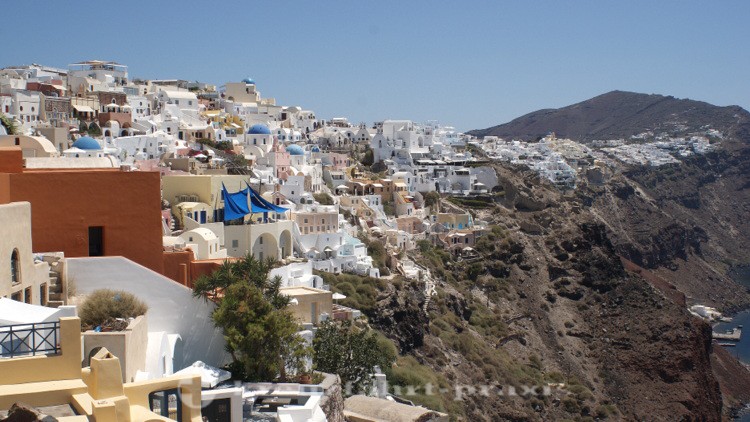 The highest point on the island, that Profitis Ilias massif south of Pirgos measures 567 meters. 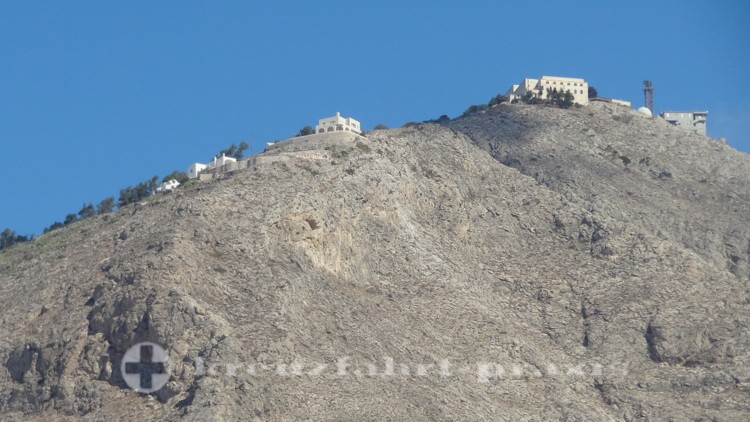 In the west of the island, the world-famous, gigantic cliff rises from the caldera. Above the coast, at around 250 and 150 meters above sea level, are the municipalities of Fira and Oia, whose houses were piled on top of each other for reasons of space. About 80 percent of the island's area is used as a cultivated area, mainly for growing wine. In the 17th, 18th and 19th centuries, wine was the island's most important export product. In addition, the wine trade gave the Santorini merchant fleet a significant boom. At the beginning of the 19th century, Santorini's shipowners owned Greece's third largest merchant fleet. In short: The men of Santorini who found no employment in agriculture and viticulture went to sea.

Santorini is primarily dependent on tourism. Countless visitors from all parts of the world come to Santorini every year to see and experience the unique island. Day tourists arrive by ferries and cruise ships. Santorini International Airport handles charter flights to and from many European destinations. Beach vacationers reside in the towns in the southeast of the island Perissa and Kamari. The communities Fira and Oia are crowd pullers because of their unique location, their winding streets and the diverse shopping opportunities. Well-developed roads, a functioning public bus network, taxis and a large number of rental cars, quads and motorbikes keep visitors to the island mobile. 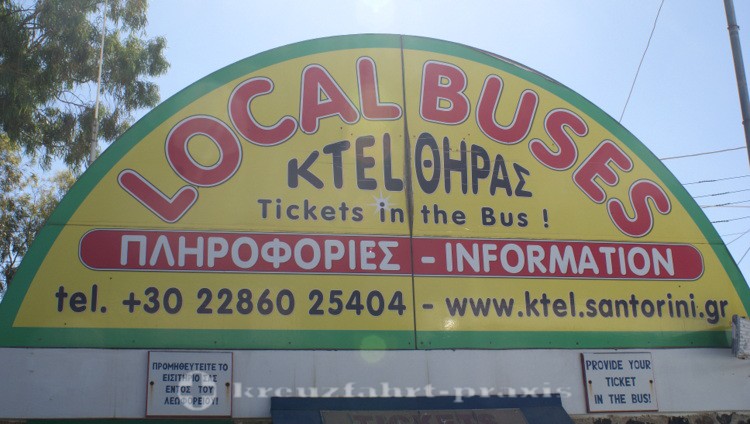 Guests arriving by cruise ship are particularly preferred. Fira, in particular, appears to the ship's guests as if she were out of a picture book. The downside of the coin is that, according to Bild.de, the Greek port authorities on Santorini recorded a total of 2015 calls by cruise ships with 636 guests in 790.000. This demand inevitably leads to bottlenecks on land. The authorities want to regulate access. The idea is that in the future only a maximum of 8.000 guests should go ashore every day. 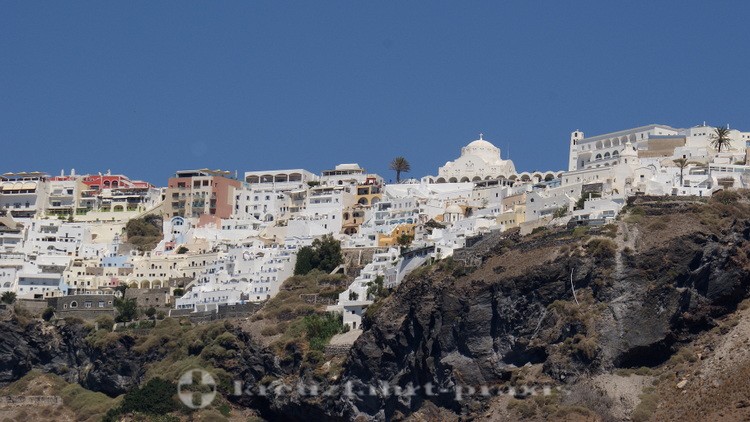 Santorini - Fira with the Orthodox Cathedral seen from the ship

We report on the sights of the island and a recommended daily program at Santorini - landmarks and One day in Santorini.

More information about Santorini can be found on our website "Greek islands - Santorini" and "Santorini island".