The Greek Cyclades Islands, including Santorini, are among the preferred travel destinations for European vacationers. Airplanes, ferries and cruise ships bring innumerable visitors every year Thira, the main island of the mini archipelago of Santorini. According to Bild.de, exactly 636 cruise ships made a stopover in Santorin's caldera in 2015; 790.000 guests took the opportunity to visit the island.

Many cruise ship passengers book one of the cruise lines' excursion packages and enjoy the comfortable boats of the Santorini boatmen Union for Athinios port tend to get on waiting buses and are back on board their ships four hours later. That is not enough for a destination as spectacular as Thira. 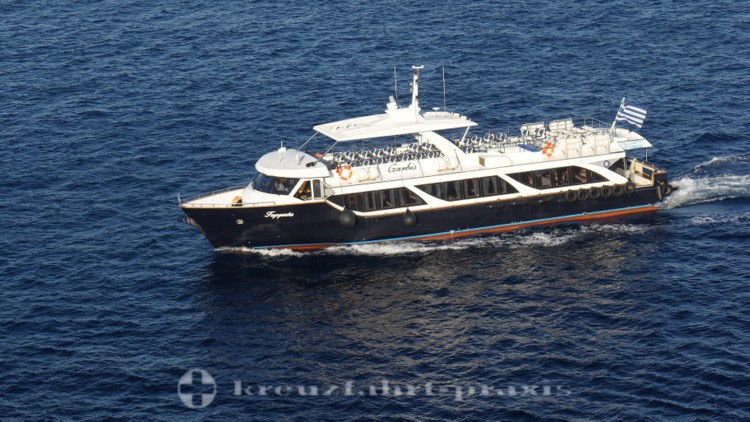 Santorini - tender boat in the caldera

Santorini seems to us to be incomparable to other Mediterranean destinations. Other destinations are admirable as well. Cities like Dubrovnik in Croatia or Valletta in Malta both have stunning fortress walls; the greek Katakolon participates in the proximity to the ancient sites of Olympia and the Greek metropolis Athen offers its guests a wealth of historical locations and museums. None of this is offered to visitors to the archipelago. It is the Thira coast, rising steeply from the caldera, that is valued and admired worldwide.

Hardworking people designed the 79 km² island over millennia. The two spectacular places enthroned high above the Santorini caldera are worth seeing Fira and Oia. Millions of visitors are drawn there every year. The winding streets, alleys and alleyways as well as the many stairs are very busy during the season. Cafés, restaurants, hotels and shops can be found everywhere. Thira's tourist spots are not for those seeking peace and quiet during the day.

In addition to their unique location, this busy unrest is what makes both communities so attractive. Houses and terraces were built on the steep slope of the caldera in Fira and Oia. Almost every square meter of open space was used. The winding paths and alleys run in between. In these residential and business locations, one might not even think about moving.

As for Oia, many homes have been driven into the rock. These caves were the domiciles of the common people. In contrast, wealthy residents, such as ship owners or their captains, built free-standing, representative houses.

For a longer vacation on Santorini, all places are ideal; every settlement has its charms. For cruise ship guests, on the other hand, we recommend that you limit yourself to Fira and Oia during a day's stay. There is a lot to see and do in both cities. 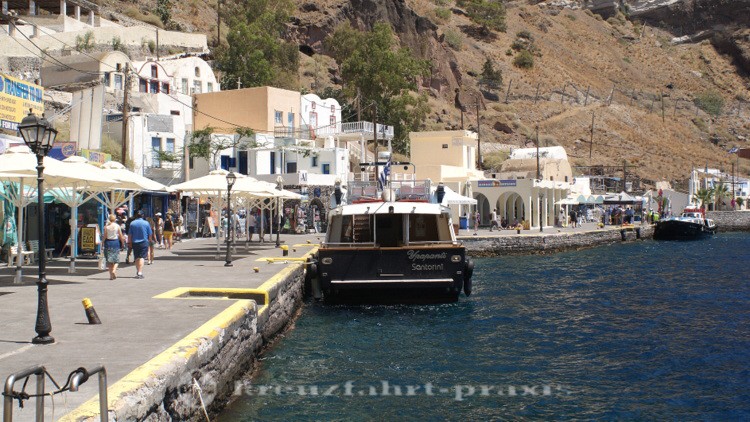 Santorini - tender boat in the port of Skala / Fira

When you arrive at the port, you have to choose between ...

Fira invites you to take a tour, a business trip (everything from stickers to Rolex watches) or a drink on one of the many viewing terraces. If you like, visit the Roman Catholic St. John the Baptist Church or the Greek Orthodox Cathedral whose landmarks are the high dome and a beautiful arcade. Inside the church has splendid wall paintings.

Those who want to go to Oia, 11 kilometers away, will probably take the bus. In 2016 the one-way ticket costs 1,80 euros. You pay at the cashier on the bus. Of course there is also the possibility to rent a car, quad or motorcycle. The stations of various landlords can be found near the bus station.

Like Fira, Oia in the northwest of Santorini lies high above the caldera. At first glance, the places look the same. In Oia, too, there are winding streets, cafes, restaurants, arts and crafts shops and much more to discover. In Oia, visitors can still find the remains of the Venetian era Argyri Fort, windmills with no functional wing and a small one Maritime Museum. Little can still be remembered of the glorious times in the second half of the 19th and the beginning of the 20th century, when Oias ship owners owned 130 sailing ships.

The day guests, however, are denied one thing. These are Oia's fabulous sunsets that can be followed from the many terraces. When the sun sets, the cruise ships will have left the caldera. 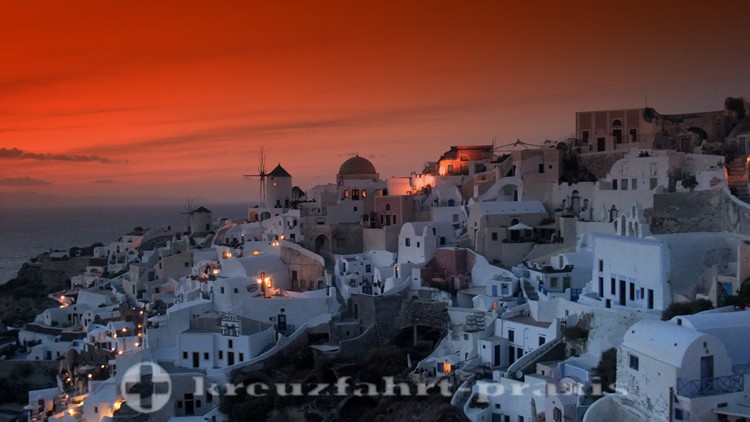 You can get back to Fira either by bus, rental vehicle or via the eight-kilometer high-altitude path that runs along the caldera and connects both places. Visitors who find the walk too long should take the bus and may get on the high-altitude one Imerovigli or in Firostefani because a section is also recommended.

Long holidays under the southern sun also include beach stays and refreshing baths in the crystal clear sea. You won't find any sandy beaches on Thira. After all, its beaches are not on the German North or Baltic Sea or in the Caribbean. Thira has mostly fine pebble beaches.

… of the Kamari Beach
the much-visited beach of Kamari extends in the south from the mountain Mesa Vouno to the airport of Santorini. Sun beds and umbrellas are available. In the south the beach consists of black gravel, further north it is rather stony;

… of the Red Beach
the extraordinary beach is close to the south of the island Akrotiri. Its hallmarks are a high, red rock wall and fine black and red pebbles;

… of the Vlichada Beach
the 800 meter long beach is close to the south of Thira Perissa. It consists of fine black pebbles interspersed with small, white pumice stone. Parasols and loungers are offered.

So much for the beaches; because we're not going to Thira on the cruise ship to swim.

The excavations of Ancient Thera

The Mediterranean region looks back on several thousand years of history. The excavations of Alt Thera on a long ridge between the towns of Kamari and Perissa in the south of the island. What was recovered from a meter-thick layer of earth and ash cannot inspire.

Fira and Oia are the two preferred destinations on Thira. The island's sloping landscape to the east is less interesting for day visitors. - Organized tours do not need to be booked on Thira / Santorini. Those who follow this recommendation and limit themselves to both places will see and experience many interesting things for a fraction of the cost of the excursions offered by the ships.