The one in the British Southampton resident Cunard line likes to refer to its more than 175-year shipping tradition.

Almost 100 passenger ships and dozen cargo ships drove for the British shipping company. But these numbers are history. There are now only three ships left under the Cunard flag. In the order in which they were put into service, the Transatlantic liner Queen Mary 2 and Cruise ship Queen Victoria, As well as the Cruise ship Queen Elizabeth. This ship portrait applies to the latter ship. 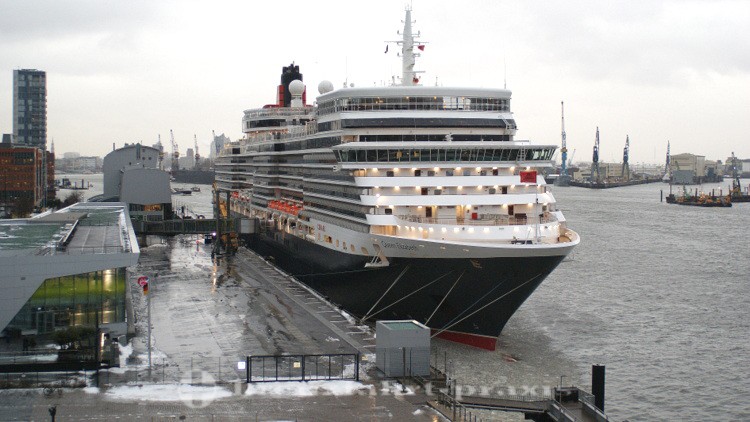 Two Cunard passenger ships previously had the name Queen Elizabeth. It was the Queen Elizabeth, measured at 83.673 GRT and commissioned in 1940, and the one deployed from 1968 Queen Elizabeth 2. According to the shipping company, this approximately 70.000 GRT ship is still the undisputed record holder in terms of nautical miles traveled. She was also one of the most famous passenger ships. She was the flagship of the Cunard shipping company for over 35 years. It was first used on the transatlantic route. After the Queen Mary 2 entered service in 2004, she was used as a cruise ship. During the Falklands War in 1982, Queen Elizabeth 2 had to serve as a troop transport for a while.

The current Queen Elizabeth is a pure-grain cruise ship of the Carnival “Hybrid Vista / Spirit class”. The ship is essentially the same as the Queen Victoria and some Costa and Holland America Lines ships. Her godmother was none other than Queen Elizabeth II. 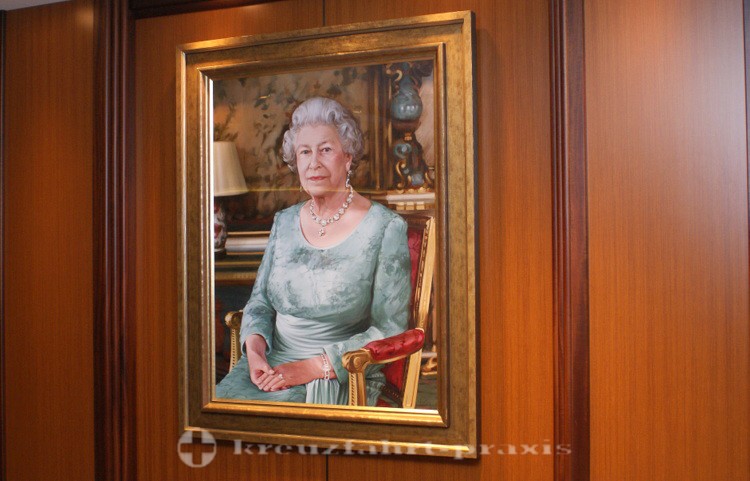 From the "sister ship" Queen Victoria it differs by a slightly different shape. The deviations are noticeable in the rear area. There, the ship looks more massive than its sister ship, the decks of which become more fluid with increasing height. The visual change brought an increase of around 40 cabins. The stern of the ship looks less pleasing; The plus in cabins is definitely more economical. 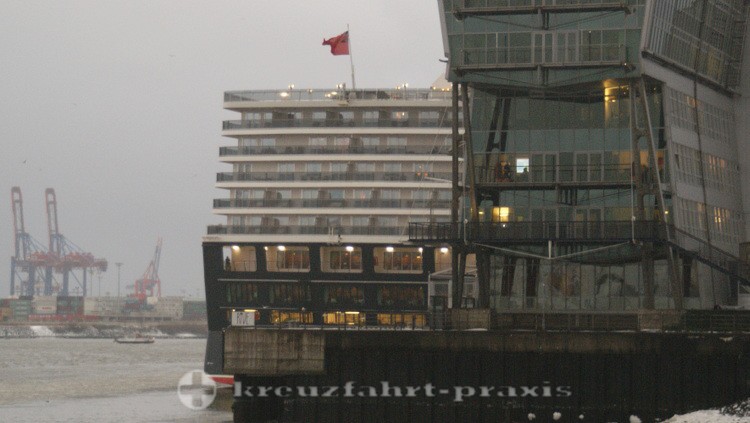 On January 8, 2016, we visited both sister ships in the Port of Hamburg on the occasion of a press tour. 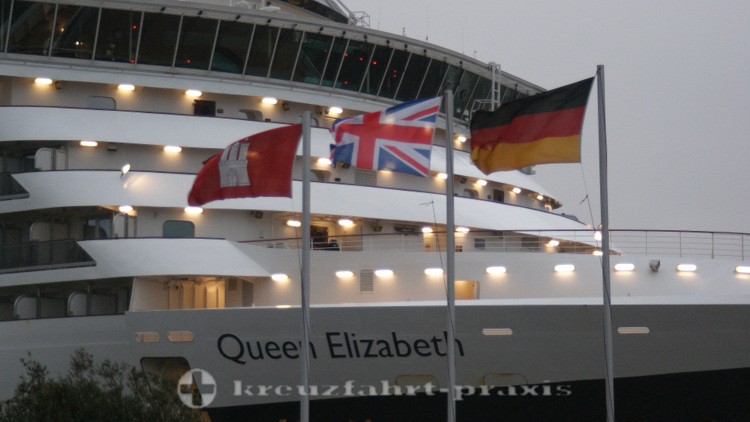 Unlike the flagship Queen Mary 2, both ships were not designed for transatlantic trips under rough weather conditions, but as cruise ships. In addition, both ships were built according to Panamax rules. In other words, in terms of length and width, they just fit into the lock chambers of the Panama Canal, which are limited in size. 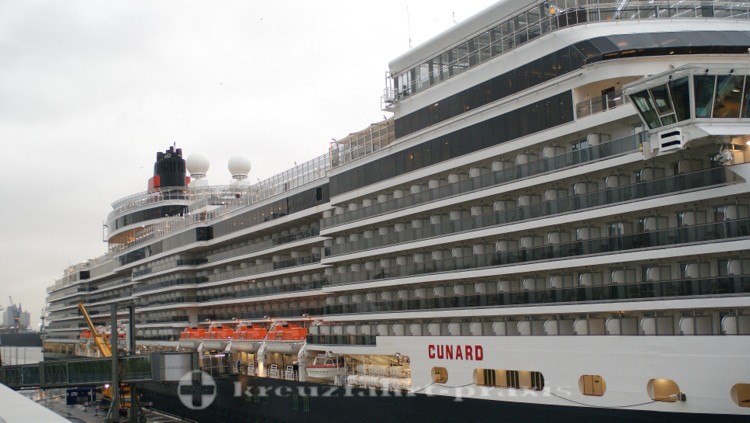 Apart from the modifications to the stern and barely noticeable changes to the hull of the ship, the Queen Elizabeth is confusingly similar to Queen Victoria. There are also significant similarities with regard to the design of the public areas inside the ship. The Grand Lobby, the central and impressive public area of ​​the ship looks identical to that of the sister ship. However, the approximately six meter high wall relief located there is praised as remarkable. It was created by Viscount David Linley, the nephew of the British Queen and son of Princess Margaret. 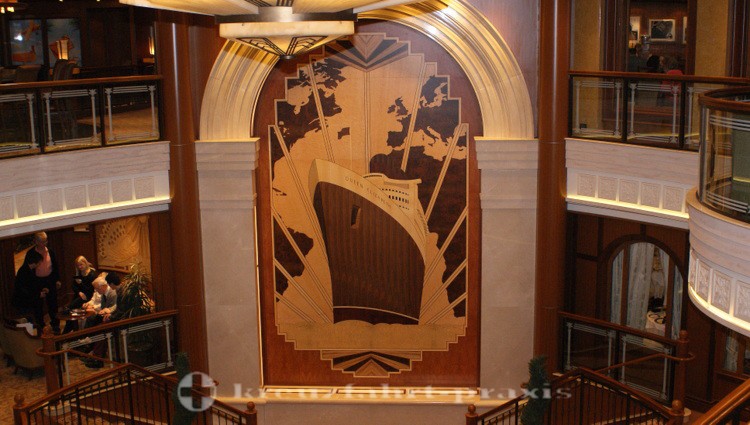 However, there are deviations with regard to the design. The Queen Elizabeth was im Art deco style designed. In Queen Victoria were in accordance with the name Victorian style elements used. 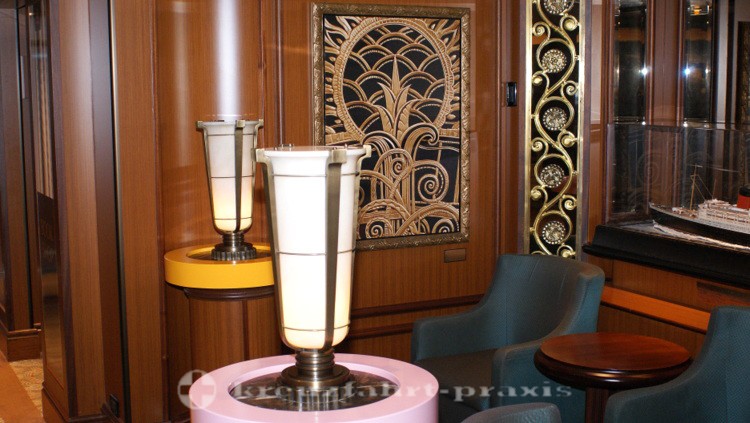 There are further differences with regard to those on the 2nd deck in the staircase between the Empire Casino und dem Golden Lion Pub located watches of the brand Dent or the color scheme of the three-storey one Royal Court Theatre.

Due to the given matches, the restaurants, the bars & lounges, the sports & wellness areas and the entertainment offer are not presented. Details can be found at Queen Victoria.

Queen Elizabeth is primarily catered to the needs of the North American and the
tailored to UK cruise market. Both nations make up the majority of the passengers. However, the ship is also suitable for those German guests who value the decisive British milieu in combination with classic manners and a dress code that is regulated in the evenings. 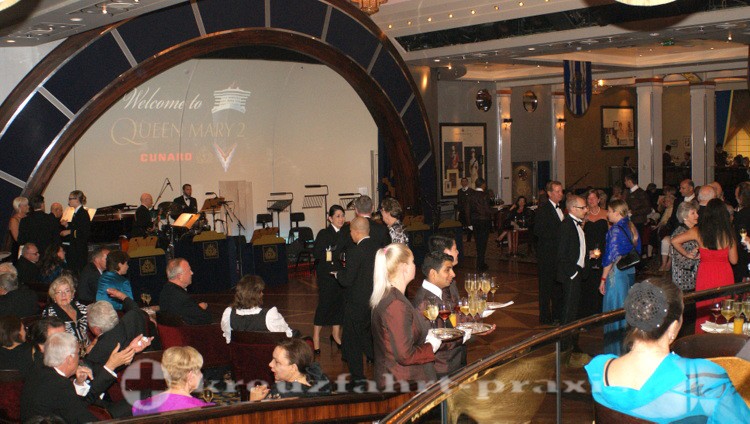 One last note: Cunard ships have been sailing under the since April 2012 Bermuda flag. The captains of the Cunard fleet are permitted to conduct legally valid weddings on board due to the special flag law. As can be heard, this service is widely used. 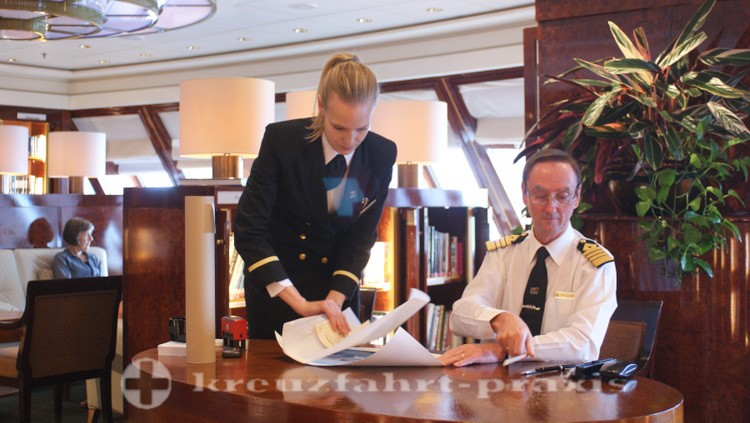 Cunard - Queen Mary 2 - Captain Wells is allowed to do weddings