Celebrity Silhouette - Behind the Scenes

In earlier times it was customary to show guests the ship, but for a while it took excellent relationships with the shipping company to be able to take a look at the bridge. The ship's command did not want to refuse guests in upscale suite categories, but mere mortals like us were not allowed to visit bridges or anything else. The fear of terrorist attacks may have brought about this attitude, especially among the large, internationally operating cruise companies. International maritime law provisions were often quoted in order to keep curious guests away.

In the meantime, some cruise companies are offering a paid view “behind the scenes”. Royal Caribbean International and Celebrity Cruises also offer such small-group tours for a fee. To say it right away, with both companies such a tour is not available at a bargain price. The four-hour one How It's Done Tour costs a hefty US $ 150 including lunch.

We were on the occasion of our cruise with the Celebrity Silhouette was invited by Celebrity Cruises to a tour of the ship in May 2013 and would like to report on this special experience. - To say the least, we saw more than expected. Each area visited was presented by the officer in charge or a deputy. We concluded the tour of our group of six, very satisfied with a good meal at Tuscan Grille Restaurant from. The following stations were visited:

After completing the necessary security check, the staff captain was available to give us explanations. He took a good half an hour to familiarize us with the realities of the bridge. 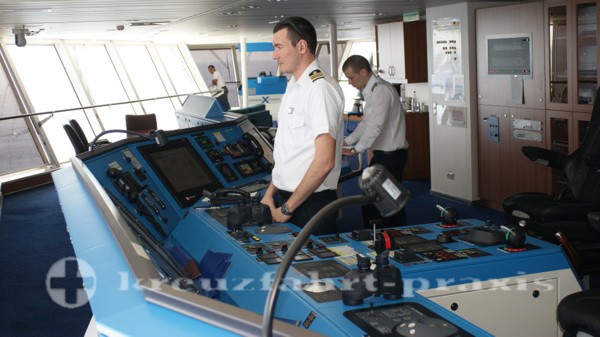 One of the bridge officers led us into the mooring deck, the ship's huge mooring area. Masses of cables, the anchor winch and a device for shooting the lines made us astonished. We saw the maneuver flap in the retracted position. Incidentally, the room looks almost clinically “clean” and the work equipment is meticulously arranged. 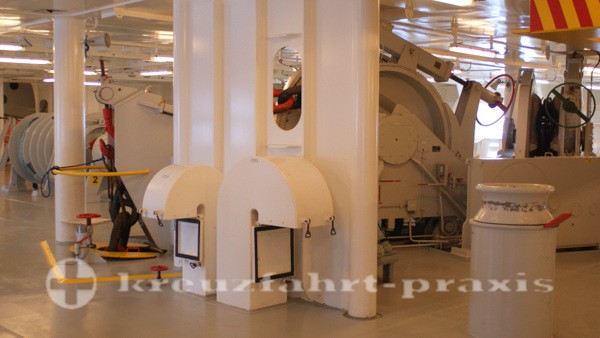 The Internet is haunted by the question of whether the crew members also sleep on board a cruise ship. On our boat tour, this question was conclusively answered once and for all. Yes, they sleep on board, in two-person cabins.

The crew area is a small world of its own. The officer responsible for personnel matters showed us how the crew lives. Among other things, the crew's fitness center, the team fair, which is divided into several departments, the library, the relaxation room with massage chairs and the employees' on-board shop were visited. We later saw the outdoor area reserved for the team with a bar and sun loungers for another occasion.

Another security check, then we stood around the chief on duty, who familiarized us with the technology controlled from this area. With the help of the many television monitors, the four powerful MAN marine diesel engines, the ship's water management and other important functions could be viewed well.

The manager of this area and his 10 employees work around the clock to supply the ship with food and drink and everything else that is needed. We learned that before the ship left Venice for the 12-day turn, 22 truckloads of groceries worth around one million US dollars were picked up. Only small stocks were bought on the way.

The kitchens of large ships are huge areas. At the Celebrity Silhouette we learned that the company's headquarters in far-off Miami decided a year in advance which dishes should be served on a particular day and how they should look. Detailed, illustrated instructions for the preparation, the components and the decoration of the dishes are given. We learned how the orders from the table waiters are received and processed in the galley. In between a stop that regulates the use of gloves. 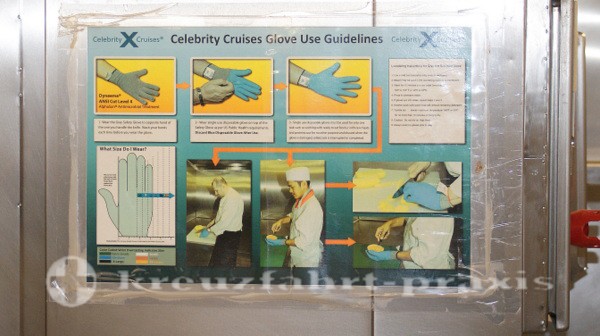 We also got to know how one of the sous chefs controls the temperature of the finished dishes. It is actually checked and ensured that the food delivered to the restaurant is at the correct temperature.

The galley visited supplies the Grand Cuvée Dining Room, the main serving restaurant on the ship. Additional, smaller kitchen areas are operated for the other restaurants.

The connection between the galley and the main restaurant

It is only a short walk from the kitchen to the main restaurant. We visited the gigantic two-story wine tower, which holds more than 1.000 bottles.

The backstage of the theater

Anyone who follows the performances of the musicians and actors in the theater in the evening does not have any idea what activities are going on beforehand. The boss of the theater gave us an insight into the stage technology, the fundus, the working methods of the actors, the sewing and the small laundry behind the stage. Performers rehearsed new acts in front of the stage or kept themselves fit through training. 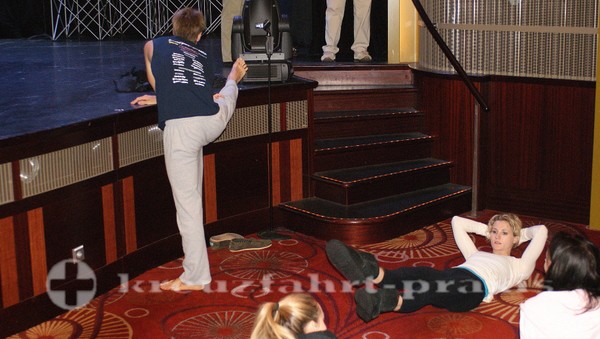 Our small group of visitors was welcomed in a friendly manner and informed competently in all areas. The tour ended with an excellent lunch with accompanying wine selection in the Tuscan Grille restaurant.

Our Opinion: If you want to know how it goes behind the scenes, you should book this type of guided tour. We concluded the tour with new impressions and the realization that it is absolutely worthwhile to take part in such a tour. One can argue about the price of 150 US dollars. - The fact is that the shipping company has opened up an additional source of income with the event. A significantly lower price would more likely lead to mass migrations through the ship. This would, however, disrupt operations so severely that it does not help the matter. Therefore, those interested will probably have to dig deeper into their wallets. However, we would like to take this opportunity to thank Celebrity Cruises once again for the invitation.