A frog goes on the water. Fti, the fourth largest German travel company, will be on the water from May 21, 2012. MS Berlin is the name of the small cruise ship with which the travel company wants to stir up the cruise market. One thing in advance. The ship, which is only 139 meters long, is no stranger to it.

Between 1986 and 1998 it was named MS Berlin regularly docked in German living rooms as the dream ship of the ZDF series of the same name. Although we were born to be a “crusader” in the broader sense, we never watched such series. Perhaps we should have done that, then we would be more familiar with the ship that will carry the flag of the FTI-GROUP in the future. So you may have missed an opportunity. But there is definitely hope for the future to get to know the ship. At the end of January we had this nice little ship presented to us by FTI Cruises at the Mittelhessische Kreuzfahrtmesse in Wetzlar.

First the most important ship data

Under construction number 163 in September 1979 as MS Berlin laid on the keel, the launch of the MS Berlin took place in January 1980. Ten months after the start of construction, the work was completed and the ship was handed over to the Peter Deilmann Reederei in Neustadt / Holstein. Soon afterwards an eventful ship life began. From 1982 to 1985 the MS Berlin sailed as Princess Masuhri under the flag of Singapore. After a renovation, the ship started its dream ship career for ZDF in 1986. 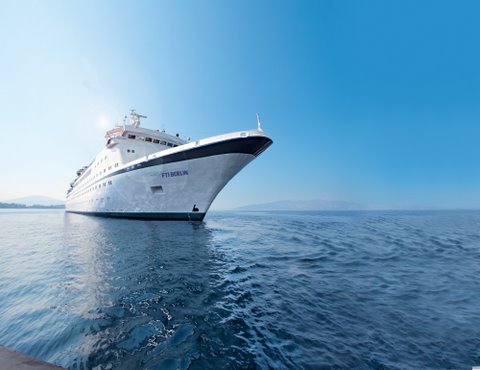 At the end of 2004, the ship was launched in Genoa before it could be sold to the British Saga Cruises. This chartered the ship for one season to a Russian provider, who sold it under the name Orange Melody used for cruises in Europe. Before the takeover by FTI, the ship sailed under the name Spirit of Adventure for Acromas Shipping Ltd. FTI named the cruise ship after the takeover FTI Berlin.

Since the beginning of 2014, the ship has been sailing under the name MS Berlin again.