Stand long on instead of hop on - Berlin will beat Barcelona

Today we follow the trail of the salmon to Bella Donna. The day starts well, even if it is much too early because we are for Barcelona to have a plan. 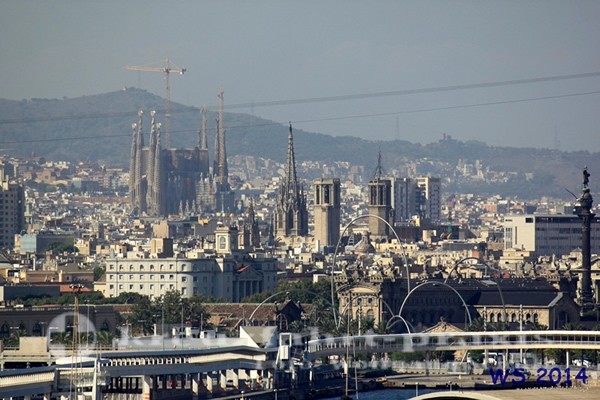 We have already ordered tickets for the Hop On Hop Off buses in Germany, which we received home on time. So afterwards we just have to jump on the bus and off we go all over Barcelona. 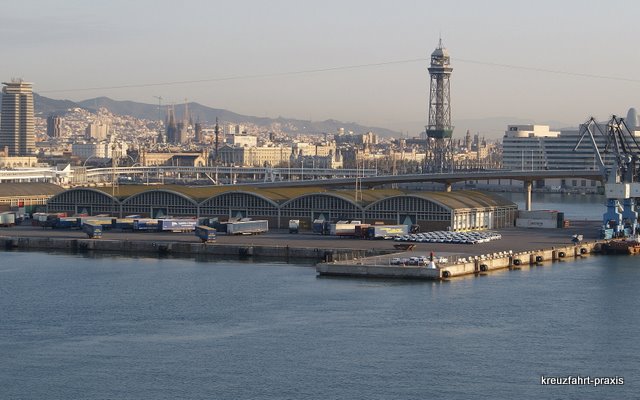 To do this, we have to get out of the harbor first, it's allowed here on foot, but just too far. And therefore has AIDA Cruises Shuttle buses organized again, which run continuously. At 6 euros per person (children the same) expensive fun for a relatively short distance from the port to the World Trade Center stop. This time, AIDA has already properly announced it in AIDA today, but my criticism in Livorno has paid off (at least I imagine that AIDA is not reading here, is well known).

At 10am we leave the ship and take the first hop-on hop-off bus directly from the shuttle bus at the World Trade Center. That's no problem at all. Both at the stops and on the buses there are guides who explain, guide and help. The young man at the bus stop advises us to wait for the next bus so that we can sit upstairs, and he is right, because the view from the open bus above is excellent, and down in the bus it is very limited despite the large windows, so then you could only see parts of the facades of the interesting houses.

The fact that we already have the tickets proves to be very practical, because the guides only enter today's validity date and we can change the bus as often as we want. At the same time, we get earphones and voucher books with all sorts of discounts. At each place there is a control panel on which 10 different languages ​​can be set, the German is perfect and loud enough.

There are obviously several very similar sounding companies that operate these sightseeing buses. Ours is “Barcelona Bus Turistic”, which has the right routes for us. The main route along the harbor is the red route, there is also the blue route through the old town and the green route along the beach. You can switch from one route to the other at several points of contact. Each route takes about 2 hours, it is important that there is no going back and forth, but only one direction, which means that you have to plan enough time to drive the whole route if you want to get back to the starting point. I only mention this because we almost weren't paying attention.

With the red route and a great place on the open deck, we first drive through the port, and finally to Plaça de Catalunya. Explanations and switching options from our earphones are very good. That's why we get off here to switch to the blue route that will bring us to our main destination, the cathedral. 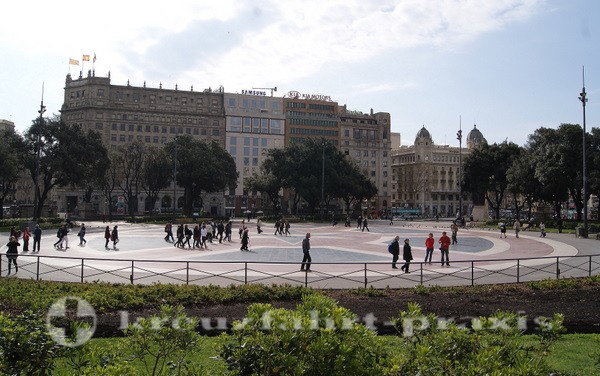 This briefly leads to a panic situation because we just got out, but before the little ones can get out, the bus doors close and the bus drives off. Fortunately only to move one up in the bus queue, then the doors open again. Phew

Hundreds of others had the idea of ​​changing trains and so a long queue formed at the bus stop. Although the buses really come every 5 to 10 minutes, the rush today is just too big. Part of it is certainly due to the fact that there are 3 larger cruise ships next to us. So we stand in an endless queue that is only slowly dwindling. Here, however, the guide is now going around looking for people who voluntarily sit down in the bus, they can step forward, since everyone else wants to sit upstairs. We are there straight away, since we only have to go 3 stops, that's justifiable. Since there are seven of us, our capacity is limited, but the next but one bus is ours and takes us quickly to the Sagrada Familia cathedral. 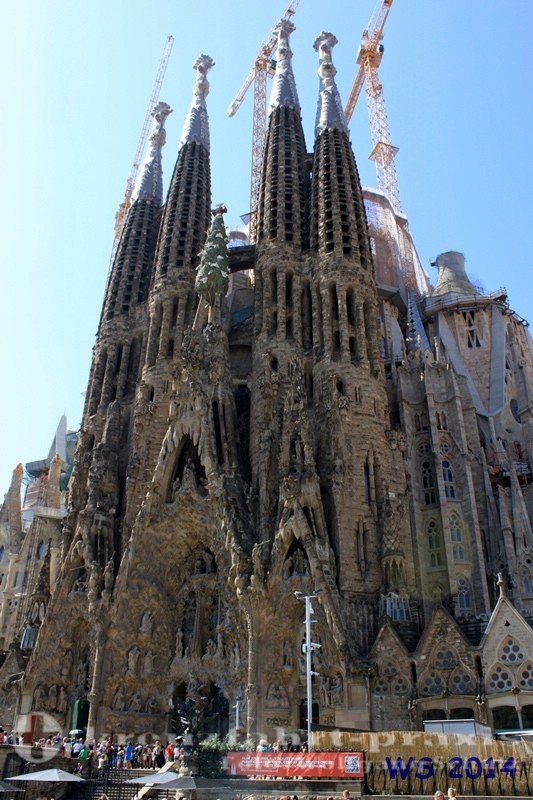 This Gaudi-designed cathedral has been built since 1883 and will be completed at the current pace in 2026. Sounds like a long construction period, but Berlin is now well on the way to top this with its airport ...

The style is so typical Gaudi with lots of curves, turrets, and sometimes it looks like a drip castle that the children build on the beach. Class.

We'd love to see them inside, but there's a line at the ticket counter. It seems to be going around the corner. And as we walk that way, on and on, halfway around the whole cathedral. And the queue doesn't go a meter further, as people are only allowed in gradually for reasons of capacity. Incredible. Now there is the possibility at the back entrance to order tickets by mobile phone and thus avoid the queue. A QR code on a large poster shows the way and I can actually buy tickets online immediately and then hold the cell phone under the guard's nose. Unfortunately, the tickets are fixed at certain times and the next free tickets will be available in 1,5 hours. Class…

If we had known that, we could have organized it well in advance. A clear yellow card at this point for our organization, after we were so proud of the preparation for the bus tour, it would never have occurred to us that such a problem could arise here. Next time we'll know - and so will the reader.

So we see the cathedral extensively from the outside, which is absolutely worthwhile, and then queue up at the bus again. Another long queue. This time there is no question of who wants to sit up or down, everything in, as long as there are seats, next bus. So it is our turn at some point, find a seat downstairs, only have to go 2 stops to Park Güell. I'll tell you right away that it won't work either, not because of some organizational deficiencies, but because we are soberly calculating the time: the blue route takes at least another hour, then change to the red route, which also takes 1,5 hours, waiting time add because of the crowds - even though we started so early, we don't have any time to run around because the ship isn't waiting for us and the last shuttle bus leaves at 17:00pm, so we don't have much reserve for the unforeseen. So we don't get out, but wait for people to come down from above and then take the seats above. The guides at the main stations do this very well in that they always wait for the lower guests to go up before letting new ones get on. 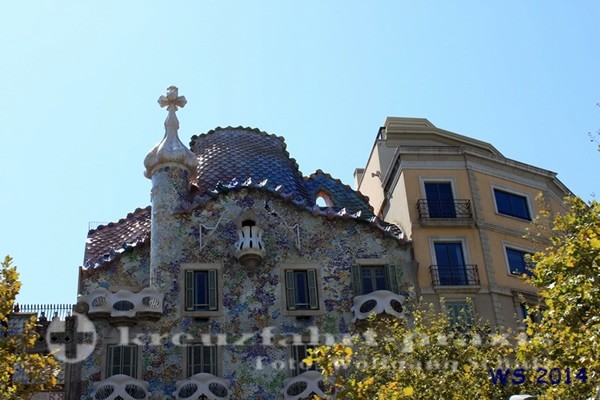 And so we are now enjoying a tour of several hours to the highlights of Barcelona (including past FC Barcelona, ​​the university, the main shopping street) and I have to say that it was absolutely worth it! At some point we have to change to the red route, there are several options, but we let the small stops pass by, we saw that the buses arrive jam-packed, and what use is the whole hop idea when the buses are so full that you cannot get on. So we go back to the Plaça de Catalunya, there we know from the back tour that everyone is getting off, and we get an almost empty bus on the red line.

Now, like from Plaça de Catalunya, La Rambla, which begins here, could have walked down to the port, but we did that last time and we would rather take the red route over the Montjuic mountain past the facilities of the Go to the port for the 1992 Olympics, which is absolutely worth it again. We really got a great overview of Barcelona, ​​saw a lot and now also know what we can specifically look at next time. 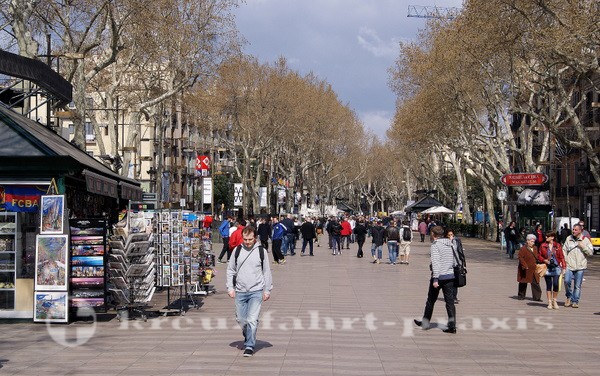 I have to say that the bus was really very well organized and went smoothly, except for the huge crowd. But you really have to sit upstairs to see something, which definitely requires a good sunscreen when the sun is burning and 30 ° C. Without the wind it would be unbearable, but it is pleasantly cooling.

Our shuttle bus then brings us from the World Trade Center back to the AIDA, since the time is already advanced, there is, as always, quite a crowd on the bus, as everyone still wants to join. But as always, everyone comes along. As it drives by, the huge AIDAblu looks really small between 2 Costa cruise ships and especially the Celebrity Equinox. 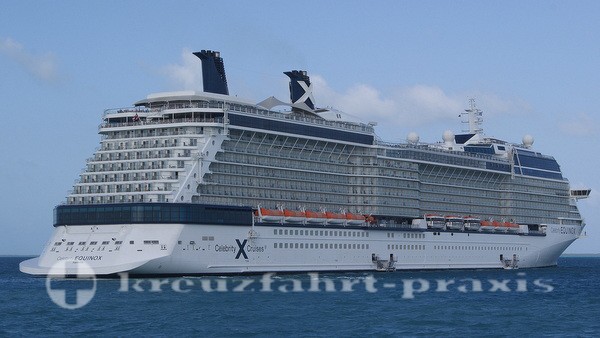 We read until dinner and recover from the hot day, but the balcony is definitely too hot in the blazing sun. And it's pretty loud here with the industrial harbor next to it, the sound is amplified quite well between the mountain and the ship. It is only at dinner that we notice how thirsty we are despite the water we have taken with us. Today there are only highlights, duck breast, asparagus, lobster, we can't eat as much today as we want to try.

But even after that we can rest our stomachs until the farewell party starts at 21:35pm with free champagne (which we also got this time to make it easier for individuals), laser show, farewell to the captain, announcing how much we ate (actually we all together, but at least when it comes to salmon, I plead guilty) and ends with the last show “Fireworks” by the soloists and dancers.