Refugee Romans, a thousand construction sites and a great day

The alarm clock rings before 6:00am And that on vacation. But there is no other way, because we all have to be exhausted if we are going to Rome all day today. On the last two visits to Rome we entrusted ourselves to a guided tour, we have seen the highlights with expert explanations and now we want to explore it again for ourselves. As good as the tours were, they had the disadvantage that the group always had to keep time together. So we decided that we should look at it all again in peace. And the plan worked so well, to use Jürgen's words: Everything done right ...

The only question was how to get to Rome. The AIDAblu doesn't really manage to go up the Tiber and so we are with 5 other large cruise ships in the port of Civitavecchia. This means that around 10.000 people attack Rome from these cruise ships alone. The invasion of the vandals was nothing against it ... 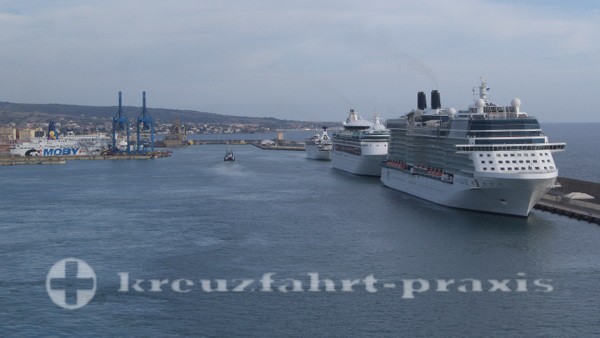 If we add the buses from all over the world and the other tourists, Rome should be full to the brim. Today is Friday, which means that St. Peter's Basilica is overcrowded.

But that also means: Rome is around 1,5 hours away by bus, the train is a little faster. But how do you get there? Do we really want to trust the Italian railways? It is not necessarily considered reliable and the ship does not wait. Well, tickets are cheaper than bus trips organized by AIDA. On the other hand, the ship would wait if its own buses were delayed. There is still a rental car left, but I do not want to drive voluntarily through major Italian traffic, especially because the rental car conditions always include an excess for damage. No, no, tomorrow we'll talk about it again when we're in the country, but big city ...

In any case, we ultimately decide on a bus trip organized by AIDA with around 6 hours in Rome on our own. The exit is either the center or the Vatican City. Without thinking about Friday, we made the right decision for the center. 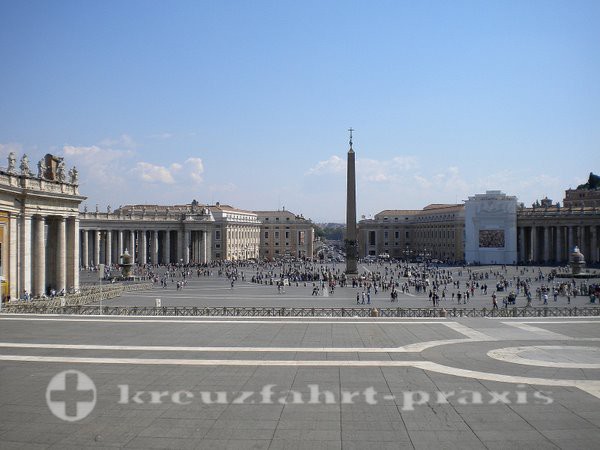 The meeting is then in the AIDA bar, from there the run on the 5 buses starts. It's actually silly, since everyone has a seat, but since we are 7, you can't be the last to appear on the bus if you want to sit on a pile. It works too, everything's fine, bus full, let's go.

Fortunately, there is a tour guide who explains a lot to us on the way there and gives us tips for the time in Rome, where construction sites are, what is best to visit, where it is worthwhile to queue and - of course - where to get the best ice cream. As we shall see later, she is right in everything. Our tour guide is Gudrun, who lives in Italy and although she originally comes from Bavaria, speaks perfect German. This makes the journey entertaining and we get to the Piazza del Popolo without traffic jams, to which it leads us and shows us where we can meet and when and in which café we can storm the toilets.

And then it starts in bright sun and well over 30 ° C through the streets of Rome. The map that she gave us is unusable because it is impossible to tell which street we are in, it only serves to assess in which direction the next sight is. In this case, googlemaps is essential, but it is great for strolling through the maze of streets and alleys.

The first thing we notice is that the streets are a lot emptier than last autumn. There are tourist groups everywhere, but still not this crush of people like back then. Gudrun also explained the background to us: every Roman who can somehow flees the city in summer. And so there are only tourists here and the few Romans who have to stay. It's amazing how big the difference is.

But the whole thing also has a downside: The summer months have to be used for renovations. And so in some places we can expect more scaffolding than sight.

It starts at the Spanish Steps. The church above the stairs is completely scaffolded, but the stairs themselves are free of construction work. It is on the edge of a large square and we have fun going all the way up and down. Going up is not a problem, but going down is no fun, because the steps have been stepped flat and at an angle over the centuries. At the edge of the steps you can see very nicely how much thicker and how straight they once were. In this respect, be careful: Danger of slipping! 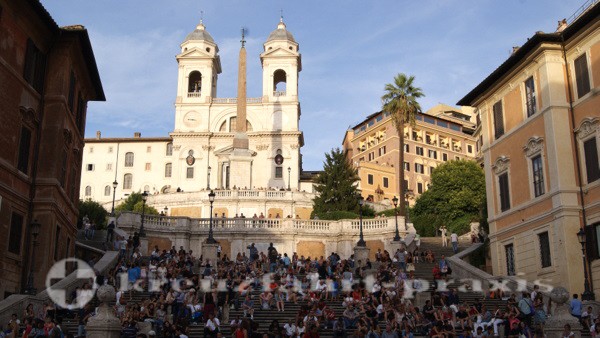 The next path leads us to the Trevi Fountain. We have already been warned that the fountain will be completely renovated and that the facade will be completely scaffolded. The water is drained and there is a wooden walkway over the fountain so that tourists can get close to the figures. Nevertheless, there is not much to see of it and nothing of the charm that the fountain has when it is running normally. For everyone who wants to go to Rome soon: This situation will last for at least another year. It's a shame, because the fountain is actually really great. At the entrance to the wooden walkway there is a policeman who only lets small groups onto the bridge, while another person in the middle chases the tourists away if they stay too long. Oh, it's a shame, but it's understandable that the fountain needs to be renovated. 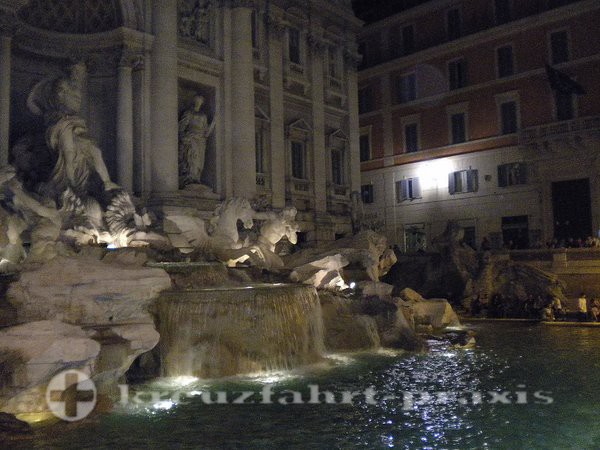 Next to the fountain, we treat ourselves to some original Italian ice cream as a consolation and that's really great. 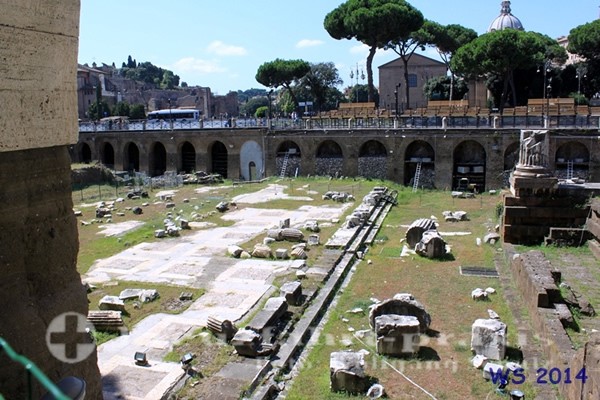 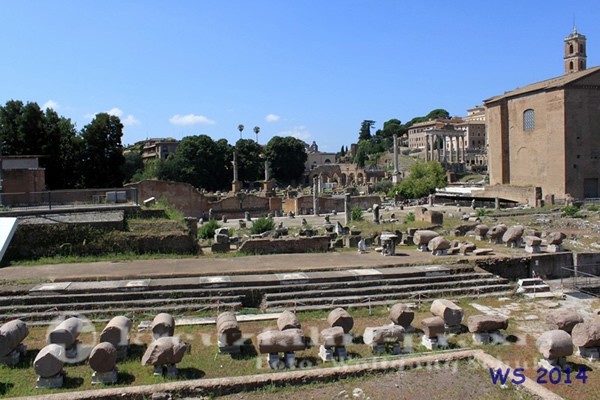 The Colosseum is also partly scaffolded, but this has been the case for years as it is being renovated bit by bit. Nevertheless, it is always impressive to look at the great arches of the Colosseum and to imagine the full dimensions. 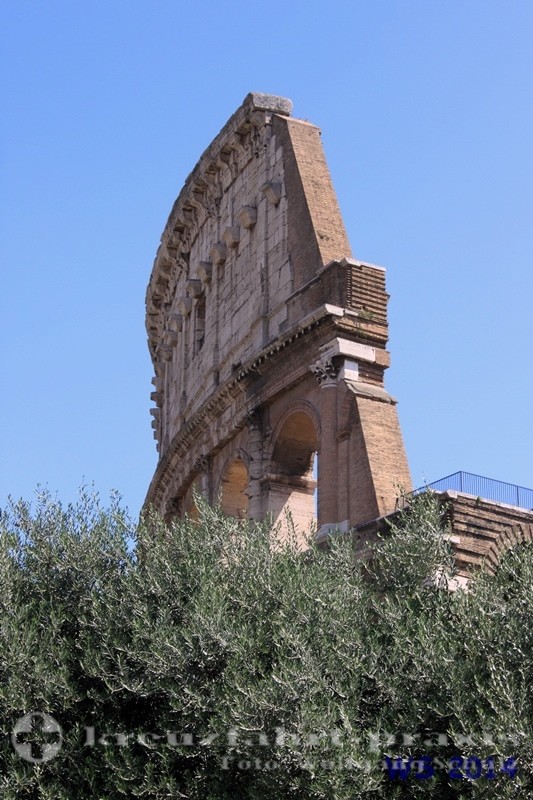 And after we have imagined that enough, we flee like most other tourists first in the shadow of the Arch of Constantine, which burns ever hotter. 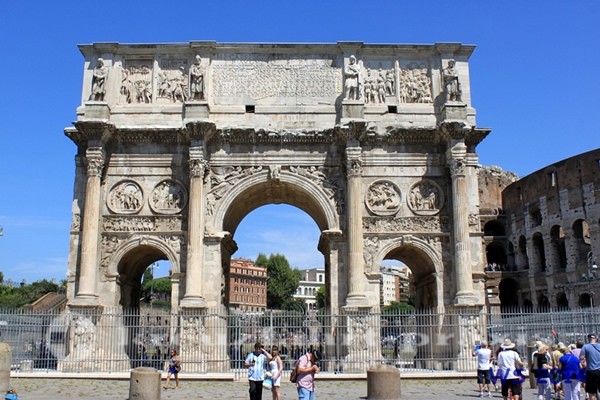 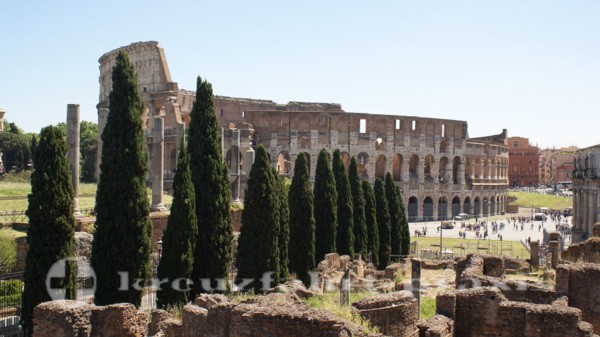 Luckily we took enough water with us. No, actually way too much. I now drag 3 bottles around the whole time, but that was nonsense, one would have been enough, because all over the city there are water-dispensing fountains from which drinking water comes and bottles can be refilled without any problems. We do this several times, because the 3 bottles are used up quickly. 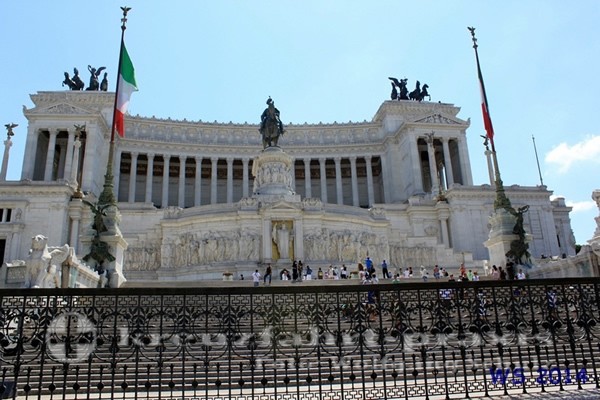 The way back is via the largest monument in the city, the Monumento Vittorio Emanuele II, which is quite impressive in gleaming white and is called a typewriter by the Romans because of its shape. In the shade of the trees in a small park next to it, the next break is due. 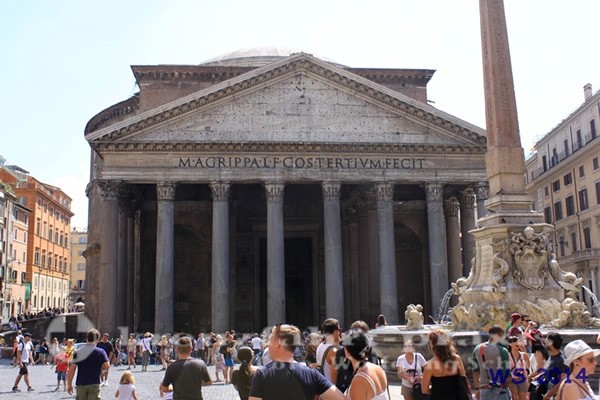 From here we go through small alleys to the Pantheon. This round building can be visited free of charge. And here, too, this time we have a lot of space to watch, last time we were just pushed along with the crowds. Hat has to be taken off at the entrance, every few minutes an announcement comes that everyone should speak softly. 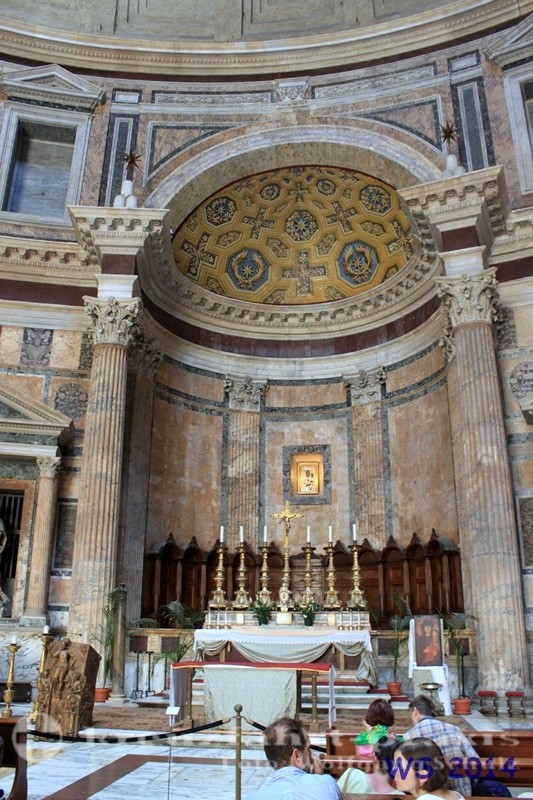 The whole thing is impressive with its huge self-supporting dome with the hole in the middle. Through this the sun now shines exactly on one of the paintings. And so we calmly look at the altar, paintings, grave and memorial steles. And take a seat on the pews, if only because it is wonderfully cool here. 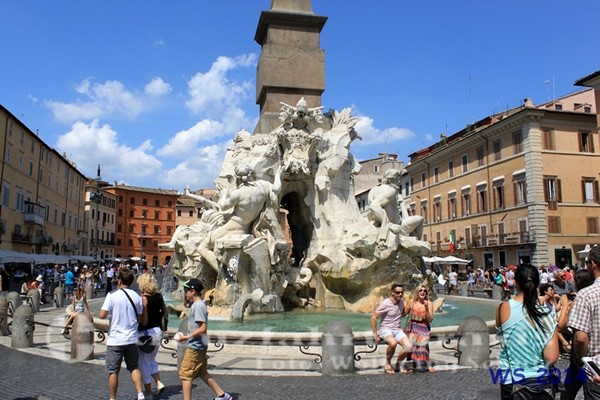 The last stop is the Piazza Navona, according to the Romans the most beautiful square in the world. This rectangular square is beautiful with its 3 radiant fountains, almost free from traffic. As everywhere with a high police presence, but above all to ensure that the tourists do not climb over the barriers to eat on the edge of the fountain. After a tour it is time to look for a shady place again.

The way back is through the shopping street Via del Corso, which is full of luxury shops. Strangely enough, even the ladies don't have the vigor to look at the displays after 5 hours of walking. And so we end up back at the meeting point on the Piazza del Popolo. Almost 1 hour early, but nobody can. So we look at the hustle and bustle everywhere, fill our bottle several times at the water dispenser and wait until it starts. In fact, everyone is on time this time and it's back to the bus. Unfortunately, the bus driver is not yet very experienced and so - as on arrival - he is the very last in the bus queue, although seats have long since become vacant in between. This more steps that have to be taken is now clearly noticeable after the day.

The return trip is free of traffic jams again and we reach the ship in time at 18:00pm to storm the market restaurant. If we weren't hungry at all the whole day despite the very early breakfast because of the heat, it is now noticeable. And after we fill our fluid deficit, the food tastes right again.

The evening program begins with the kids' question time in the Theatrium, during which the children can ask questions to the chief engineer, the general manager and the entertainment manager. That makes Alexander Schulz in particular very happy again, so that the parents also have plenty to laugh about. But a little girl falls asleep in the middle of it and lies there sweetly on the stage floor and continues to sleep when one of the supervisors picks her up. Understandable if she was in Rome all day.

We experience the departure today on the balcony with a great view of the Queen Elizabeth. Finally we see the play “Dangerous Legacies” with actors and soloists, which the children especially love, before we all fall into bed tired.

The next stage is 263 kilometers to Livorno.