After all the experiences on the last trips, I have seriously missed him. But today he's back and it's all familiar. No, I'm not talking about salmon (how could the inclined reader come up with that?). I'm talking about the rain. And with him all the umbrella sellers, whose race we already thought to be extinct.

Today the alarm goes off again in the middle of the night. But there is a reason for that, because we have a plan: We have already ordered a rental car from Europcar in Germany, because we have calculated: No matter which AIDA excursion we take, a rental car is always cheaper with 7 people. And Livorno isn't such a big city, so we dare to jump into Italian traffic. And since we were rather disappointed on our last visit to Livorno, we should go to the surrounding area today.

We are among the first to have breakfast at Bella Donna. I won't say anything more about the salmon, I'm about to end my AIDA salmon friendship. But AIDA will see what they get out of it ... 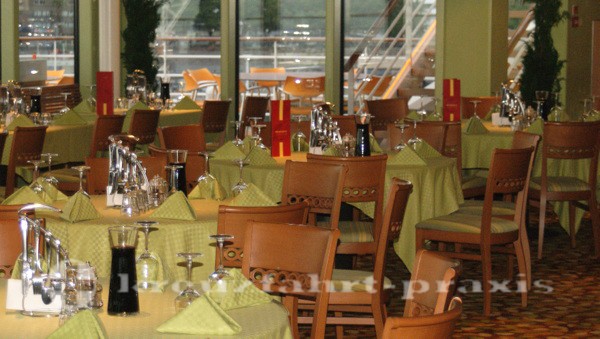 Today, however, AIDA is deviating from its usual good organization for the second time. Nowhere does it say that you are not allowed to leave the port on foot. Well, we're lucky because we knew from last time that there is a shuttle bus for which you can get tickets downstairs in the terminal. Everyone else only finds out when they want to take a nice walk and are sent back by the entrance guard. Normally that should be in AIDA today, but nothing. What's going on? That worked better in the past. If you, dear AIDA, are missing a sensible organizer, no problem, I will be happy to offer my help. It's all a question of price ...

In fact, this question affects us directly: We have ordered a 7-seater from Europcar. It's at the port entrance, about 1,5 km away from us. We could do it on foot, but we are not allowed to. The shuttle bus doesn't stop there either, only in the city center. Costs around 5 euros, for 7 people it makes 35 euros. We also have to persuade the bus driver to let us out on the way. An alternative to this would be a taxi, there are plenty in front of the door, should cost around 25 euros. But we also have to go back in the evening. When we disembark, we don't have a solution yet, we want to ask ourselves. We are delighted to see a Europcar stand right on the ship (all of the competing products are there too). We grab the guy there and show him our order documents. And the problem is already solved: For a surcharge of € 24, we can get a car right here on the ship and also return it here. The formalities are done quickly. The only problem is that I don't understand a word. My English is not that good anyway, and his English is fluent and incomprehensible. Our second oldest was in Australia for a couple of weeks, he listens and that's how we manage it.

We take over a white Fiat right outside the door. Still quite new, but with a few dents. There we have the subject of Italian traffic again ... First we photograph the dents and damage, then we start. The car is clearly big enough, drives nicely, but the gears are torture. Apart from the fact that I'm only used to automatic transmissions, I find the gear shift stiff and you have to be very careful, not always from 1st to 4th. To change gear. In other words: Fiat would not have been my first choice now ...

The traffic is then as expected: Fortunately not very busy, but it leaves a deep admiration for the courageous driving style, especially the mopeds. They boldly cut us, other cars overtake in every overtaking ban in such a way that we already believe that two-lane lanes are a misunderstanding, because three-lane lanes are generally used. But we get used to it and especially in the numerous roundabouts we quickly learn to drive in Italian, otherwise you won't get anywhere here. We only adhere to the speed limit in German, mainly because we know how sensitive the penalties are, especially for foreign drivers. We want to avoid that.

Oh yes, maybe I should tell you why we do it like this: I've already written that we were disappointed with Livorno last time. Today we just want to see the wonderful landscape of Tuscany and therefore move on country roads to two destinations: Pisa and Lucca.

And the landscape doesn't disappoint. While everything around Rome was brown and dry, the hilly landscape here is lush and green. Everywhere fields, small villages, reed-covered green spaces. We are heading for mountains, some rocky edges on the sides, but otherwise thickly covered in green. It goes there via serpentines. A really beautiful landscape, that was a good idea.

The country roads themselves are rather poorly developed, many high humps, because the roots lift the asphalt. As a result, the speed is usually limited to 60 to 90. But that's ok, so we can see a lot, even if - as mentioned - we are the only ones who halfway stick to it. After about 30 minutes we reach Pisa.

In Pisa, we quickly find the parking lot that the Europcar employee has marked for us on a map. There are several of these parking spaces, ours costs € 1,50 per hour, and is still quite empty, which will no longer be the case around noon.

On foot we are then in 5 minutes at countless bag and souvenir stalls that are in front of our actual destination. Here our little one absolutely wants a completely overpriced Pisa bag, which ultimately leads to a clash between the big ones, who are cleverly pushing the retailer down in price and one of us (I won't say who) who is already holding out the requested money ...

It's raining now. Always a shower at 27 ° C, but good, Tuscany must have gotten so green somehow. Through the light summer rain, we are now working our way into the old center: Simply walk through a gate from the merchants and then the famous Leaning Tower of Pisa is in front of us. Actually there are three buildings standing on a lawn. And that is something special, because in most cities the free space was built up at some point, here it has been preserved. In the center is not the leaning tower, but the Cathedral of Santa Maria Assunta, an imposing cathedral made of white marble. The free-standing bell tower made of the same marble began to sag during construction in the 12th century and thus became the leaning tower of Pisa. The third building is a round domed structure, the baptistery, also made of marble, which is part of the cathedral as a baptistery. At the edge of this ensemble stands a huge windowless wall, the Camposanto Monumentale, a cemetery that is surrounded by a huge cloister.

Of course, we first take the most important cult photos: Everyone wants to hold their hands in such a way that photos are created in which the hands hold the tower. That's funny, but also not that easy, because not only all the AIDA tourists, but also countless Japanese people have the same idea. The rest of the old town should also be very beautiful, but due to the rain we do without, as we also have a very beautiful old town ahead of us, namely Lucca.

We reach Lucca after about 30 minutes. First of all, this is a city that is much bigger and more modern than we imagined. But inside the city there is a city wall that completely encloses the city center. We first go around the city wall, then find a large parking lot where we can park for 3 euros for 3 hours and step through a city gate into the old town. We noticed that the wall is very massive. This fits in with the fact that the city was one of the most important European cities in the Middle Ages.

From here we can quickly get into the city center: Small alleys run between old facades and lead to one or the other square. There are small shops, ice cream parlors, small, nice restaurants everywhere. Many streets are pedestrianized. This is really a beautiful old town that is worth strolling through. We do that extensively until we get stuck in a restaurant where we can sit nicely outside and watch the people passing by. Everyone orders a big pizza, we have to try Italian pizza. And really: is something different from Dr. Oetker from the freezer ...

Afterwards it goes back over land to the sea. Unfortunately, we come across a motorway with a toll booth. It is well developed, but there is never a downhill run, so we can only start again shortly before Livorno. So we drive through Livorno and find a long, very nicely built promenade on the south side. Including at the point where we stop, only stones, but still nice to linger. In the meantime we have bright sunshine again.

When we have to leave, we are still looking for a gas station because we have to return the car with a full tank. And seek and seek and seek. I don't know how much diesel we wasted just looking for it. Finally we finally find one where you can only preselect amounts. That's stupid because we have to fill up our tank and don't know how much we have used. So let's try 10 euros first, which is not enough. We don't use the second 10 euros completely. Great, money again given away.

When we then set off for the harbor, we drive along a street where dozens of gas stations are all next to each other. What is the point of having all gas stations on just one street?

In the port we are then waved through the barrier without any problems and have to start looking for the ship. It's not that easy because of all the winding jetties and so we try to reconstruct the route there, which we ultimately manage. Handing in the car and getting a signature that everything is in order is also easy. Although there is still half an hour until the "all-man-on-board" time, we were eagerly awaited, because the entrance structures are being cleared and the red carpet right in front of our noses - torn away. Well, thank you, we are very welcome ...

The highlight at dinner today is undoubtedly the fruit. Fruit on skewers. Held briefly under the chocolate fountain. That's enough for me, we're still a bit full from the pizza.

Then we play a big game of skip-bo with the children and watch the art auction a bit. It is astonishing, but there is always someone who has to wave wildly at someone during the auction and threatens to make an unwanted bid. Afterwards we see the show "Who Wants to Be a Millionaire" for the first time on board, which is actually exactly the same as the original on television. Entertainment manager Alexander Schulz does it very confidently and humorously. Both candidates who fought their way up to the chair win nice wellness vouchers. The main prize, the maiden voyage with the Aida Prima, but nobody creates.

The sea is quite calm the whole trip. Tonight too, but there is a strong wind on deck today. We are also blown through on the balcony so that it is not possible to stay there in the evening.

The next stage is 302 kilometers to Ajaccio.