Wet except for the panties - but this time without rain

Do you know that standing alone at the railing in the evening and looking over the sea? The moment when it's getting too dark to read, but the sea can still be seen? Where the others are already pouring into the theatrium or to eat and no one can be seen or heard? Where only the sea rushes below, the ship foams the sea next to it white and leaves a widening trail to the rear? When the heat of the day has disappeared and it is really pleasant in the air? Where a light sea breeze blows through your hair and blows your head free? That feeling of freedom, longing and calm. I love this moment and I think that's what cruising is all about, much more than the food, the shows, and the destinations around the world.

Now was just such a moment. But I'll start this morning: 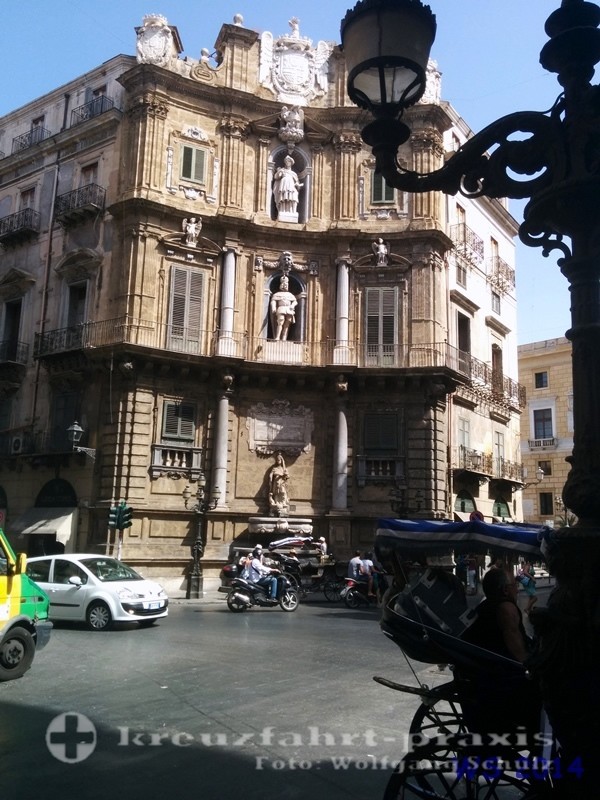 The willing reader, who has already followed my last two visits to Palermo, may remember that I asked the question whether Italy can exist without rain. So far we only knew Palermo soaking wet and with hundreds of umbrella sellers. In response to my last report, someone suggested that I should try it in summer instead of autumn. Thank you for the tip: I can now confirm that Italy also exists with bright sunshine. But we're still soaking wet except for our panties. But in order:

After the kids' club for the little ones and the big ones getting up at noon, we march off. Since the port is right by the city, we are not dependent on the numerous taxis and horse-drawn carriages offered in front of the ship. This time we are also very cheap, right at the port exit. In the meantime, the construction work has also progressed further, the former terminal already looks so well renovated that it can be recognized as such.

Our destination today is the cathedral, which we never reached on our last visits because we discovered too many interesting things along the way. The distance of a good 1,5 kilometers should also be manageable. First we go the road that runs along the harbor. Decay is omnipresent here. Actually, it would be nice to walk along shops and restaurants under pillars protected from the weather. But the restaurants are almost all closed, the shops empty. The plaster is crumbling in many places. Even the gas station that interrupts this row of shops, which was still in operation last year, is closed. Blocked off so cleverly that it is only possible to continue on the way by climbing over the barriers. Or you can walk along the street for a short time, which is less advisable with the Italian way of driving. At an old, completely dilapidated house, it goes to an older part of the city, but here too the historical buildings are falling into disrepair.

At some point we reach Via Vittorio Emanuele, which is marked on the plans as one of the main streets, but is significantly narrower than the others. Here we have to turn towards the city center and the cathedral. In retrospect, we can reconstruct that the last time we walked directly through the city center, we crossed this street several times without recognizing it as the main street.

From here you can see what we have already seen on our last visits: the juxtaposition of decay and beauty. Many facades on the street have not been maintained for a long time. But where you can look through gates you often see very nice courtyards with pretty staircases, trees, water features. Very narrow, endlessly long alleys branch off everywhere, many look dead, others are full of stalls. The sidewalks are sometimes a bit narrow to accommodate all people, but this is also due to the fact that everyone only walks on one side - the shady side.

That is also justified, because the sun burns relentlessly at 37 ° C. If you hope that the houses will provide shade, you will unfortunately have to find out that the heat builds up in the canyons, sometimes mixed with the smell of the remains of countless horse-drawn carriages or stray dogs. It's not like that everywhere in the streets, but we come across it again and again.

It really doesn't rain like that today, but we can't sweat as much as it is hot, with the result that we're wet through and through. So the wisest decision today was to take enough water with you.

The sidewalks can certainly not be compared with German sidewalks, where the city administration receives a lawsuit if someone gets stuck with the high-heeled shoe and cracks their ankle. There is patching everywhere, so it is certainly more difficult for the disabled, but it is still manageable. You just have to be careful because the entire width of the sidewalks suddenly drop to a depression that leads to a garage or a lower-lying entrance. At some point we come across a square with a large fountain. We could have sworn that we've never seen it, but after looking around it becomes clear that we know it very well from last year, just came from a different street and of course it looked very different. It is the "Fountain of Shame", so named because of the many realistically naked figures that stands in front of the town hall in Piazza Pretoria.

Nice, and above all the stairs in the shade invite you to relax. Shortly afterwards we come to the square of the 4 fountains (Piazza Quattro Canti), actually just a small intersection, at the 4 corners of which a fountain is integrated into the house facades. Here it is definitely worth taking a closer look at the fountains, but there are also a number of horse-drawn carriages with the odor problem already explained. A little further on there is a large interruption in the row of houses with a square on which the cathedral from 1185 stands. At first glance long, high, but narrow (if you look into the portal, you can already see the open door with cars in front of it on the other side). Part of it is being renovated and suspended, but most of it shines very nicely in a reddish stone. Inside, I am initially disappointed because the white pillars are more dirty than white. It takes a while before I realize that this is not the case, but that I still have the sunglasses on ... Well, embarrassing, but what should I do, the sunglasses are in my eyesight, if I have them on, everything looks dirty- gray, if I take it off, everything is bright, but I can't see anything clearly. Hm. It would have been smart to have my normal glasses with you. Well, you can see what kind of problems innocent tourists have to deal with ... 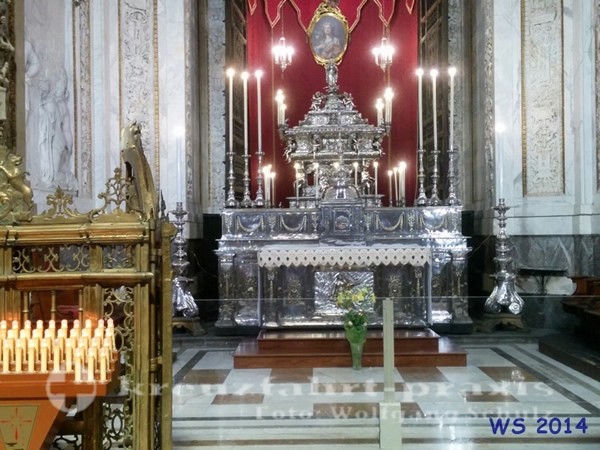 When you come in, you might still think: Well, big church, nice, it's really worth taking a closer look. A baptismal font made of gleaming marble with stories from the Bible carved into it. An altar from top to bottom made entirely of silver. On the other side, an even more precious altar made of lapis lazuli. Locked in the side relics such as a mummified hand. Several side parts are adorned with narrow altars that look almost the same. The biggest difference, which is not noticeable at first glance, is that one of these altars is advanced half a meter. Neither from the front nor from the side can be seen that there is a narrow passage behind. And since it cannot be seen, “toilet” signs clearly indicate it. The figures set into the floor or the carvings on the passages are also worth a closer inspection. In short: the journey was worth it and we are here for a while. The fact that it is also pleasantly cool is a nice side effect. Oh yes, visiting the cathedral is free, photos are allowed, but there is a fee if you want to visit the crypt or the tower.

On the way back we take a different route, but the various sights can no longer arouse our interest, especially the little ones drag themselves more through the heat. That's why we steered straight to the ship, where the Bella Donna has just opened the last few minutes for coffee, enough time to pour cool drinks.

The rest of the afternoon we enjoy the air conditioning until early supper in the market restaurant. Highlight today: leg of rabbit in beer sauce. And green melon. Lots of melon. This should only impress the reader by how much we pay attention to health here. After all, most of the melon is water and it is known to have no calories. Plus the vitamins, perfect. What I am not telling you now is that I discover at another stand that one of the waiters is cutting freshly razor-thin Italian country ham. I diligently wrap it around the melon (the country ham, not the waiter).

The evening program is done for us again. In the exclusive show "Sezono" the soloists, dancers and acrobats represent the 4 seasons. As always, this is perfectly done. Overall, not quite our taste, we still love the exclusive AIDAmar show, “Kauri”, but it was still well implemented. Incidentally, “exclusive show” means that each of the 7 ships of the Sphinx class (i.e. the large AIDA ships) has a show that is only available on the respective ship.

The conclusion today is the solo program of the Swedish musical actor Simon Lockström "I can make you love me". As always, I find that the solo shows are not planned at the right time with too many alternative offers and that the theatrium is only partially filled. I always get the impression that the passengers completely underestimate the quality of the soloists. Even if the music doesn't always suit you (with a song by Justin Biber some older people leave), where do you have the opportunity to experience such excellent singers live up close? Where else is eye contact with the actors possible during such a show? That's why we enjoy his program, and when he starts rocking after some quieter songs, he caught the audience.

The next stage is 319 kilometers to Naples