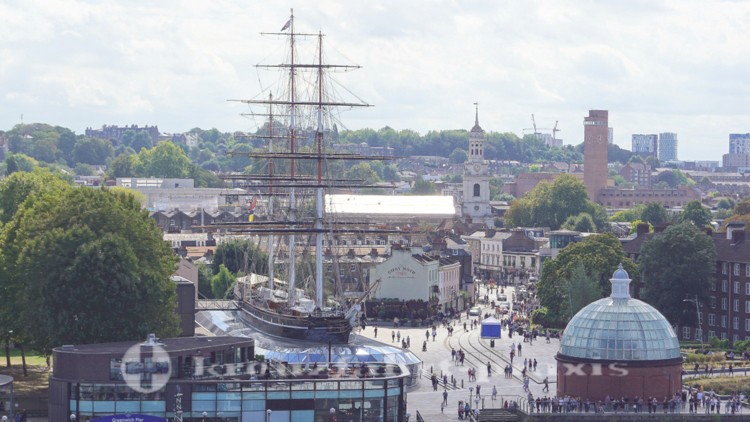 Today we reach the last destination of our cruise: Greenwich, Borough of London. The Azamara Journey will stay in Greenwich overnight and so will we. This gives us plenty of time to visit Greenwich and London and the sights to explore. 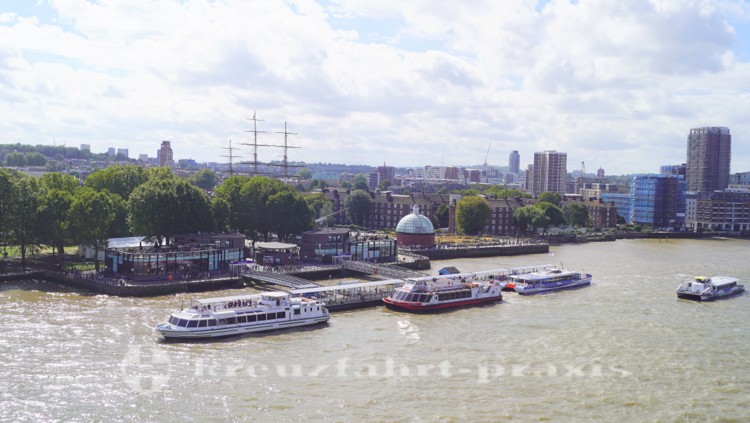 Up the Thames to Greenwich

But first of all we drive slowly up the Thames for a few hours, which is surprisingly wide at first. We enjoy the ride on the terrace of the buffet restaurant. It's a little cloudy, but not cold. A retired pilot - Captain William Wells - comes on board just before the town. He accompanies our cruise on the Thames and gives information and comments on all sorts of things that can be seen from the ship. The trip on the Thames gets more and more exciting the closer we get to the City of London.

After Woolwich we pass the Thames Barrier, the flood barriers of the Thames which protect London from storm surges in the North Sea and which are among the largest in the world. From here, the Azamara Journey is secured by a tug at the front and rear.

It's not far to Greenwich. From the ship we watch the Time Ball on the roof of the Greenwich Observatory. Every day the red ball is pulled up and falls down at 13:00pm sharp and that is exactly what we see today.

For details about the Time Ball and everything else we're going to see, see Greenwich landmarks.

The docking maneuver in Greenwich is difficult and takes a long time. We dock at a pontoon in the Thames and tend to Greenwich Pier from there. We leave at 14:30pm We start with a tour of the place. Greenwich is actually a tranquil London suburb. But today is Sunday and the weather is fantastic, there is a lot going on. 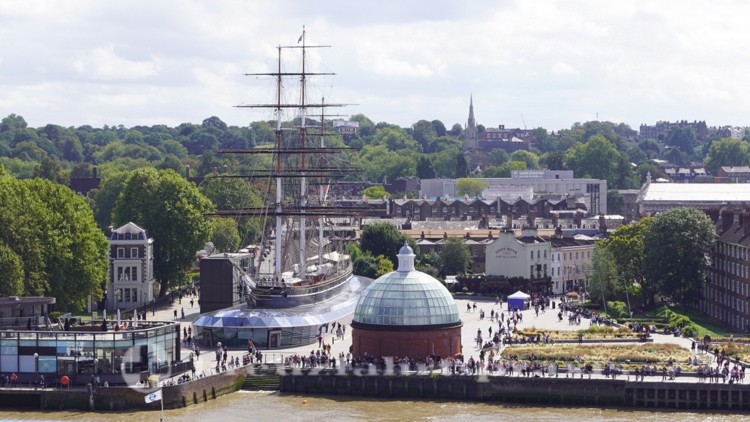 First, we climb the hill in Greenwich Park to the Royal Greenwich Observatory. The Royal Observatory is the famous place that tells the time around the world. The prime meridian runs here and thus the reference point for the date and world time. The historical prime meridian is marked on the floor of the courtyard and is almost besieged by people who would like to stand with one leg in the western and the other in the eastern hemisphere. Anyone who is not interested in all of this should still not shy away from climbing. A fantastic panoramic view of Greenwich and the London skyline makes up for the effort. 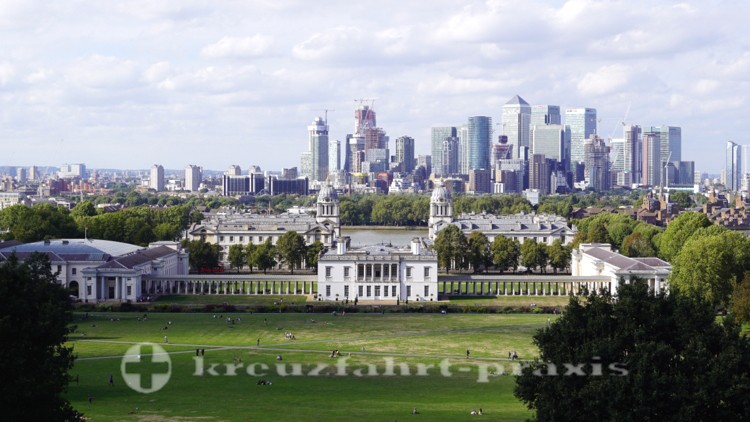 In Greenwich we take a look at St Alfege's Church, Greenwich Market and the Cutty Sark, the former East India sailor.

Then we take the Thames Clipper up the Thames to the London Eye. We pass the Docklands, beautiful old wharfs, the Tower Bridge and the Tower, then the Millennium Bridge, the Shakespeare Theater and the Tate Modern. A real sightseeing tour by boat.

We have described the trip in detail: On the River Thames from Greenwich to Westminster.

The London Eye is the largest Ferris wheel in Europe. One turn takes 30 minutes and the journey costs £ 27. We haven't reserved any tickets, but we're lucky. Not as many people as we thought are waiting for a ride on the London Eye. It takes 30 minutes from buying tickets and queuing in front of the gondola. Then it starts, very slowly up to a height of 135 meters. The view is amazing. And the costs are quickly forgotten.

In the government district of London

We stroll along the Thames and cross Westminster Bridge. The parliament building will be partially rebuilt. The Elizabeth Tower, popularly known as Big Ben after its bell, is covered. Still, the buildings look impressive. We walk to Westminster Abbey and then along St. James Park. You can take a look at the Royal Pelicans. Their ancestors - a gift from the Russian ambassador in 1664 - were settled here, and pelicans have been in St. James Park ever since.

Via Horse Guards Parade, the famous parade ground between St. James Park and Whitehall, we reach the entrance to heavily guarded Downing Street. Then we walk past the Cenotaph, which was built to commemorate the dead after the end of World War I, and back to Westminster Bridge. We'll take the next Thames boat back to Greenwich. Shortly after eight o'clock we are back on the Azamara Journey. 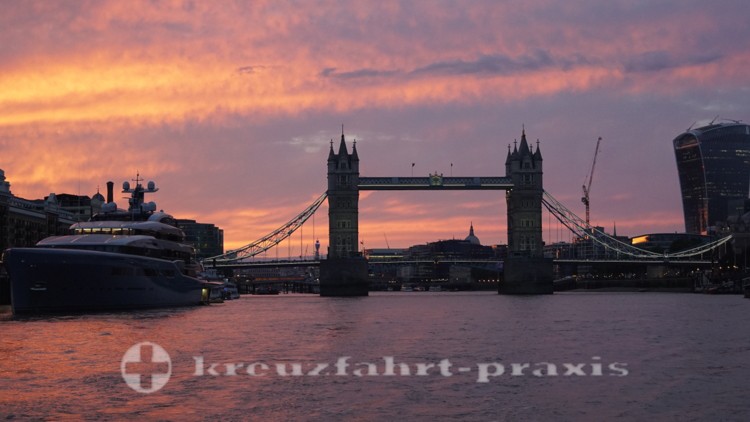 In the evening the crew of the Azamara Journey says goodbye with their big farewell show "Crew got talent". We definitely don't want to miss this event. It is always impressive how many good entertainers there are in the crew of a cruise ship. We are still on the ship until late in the evening, meeting fellow travelers and having a last drink at the bar. Then we pack the rest of our things and sleep. Tomorrow London is waiting for us again.