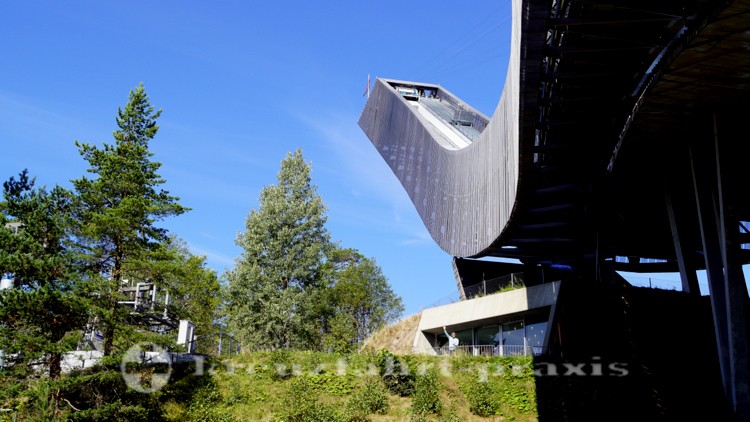 The Azamara Journey is on its way to Oslo and is scheduled to arrive there at 8:00am But we get up very early so that we can experience the trip through the Oslofjord.

Oslo seen from the Oslofjord

This is an advantage of our cabin: we can enjoy the landscape from the balcony. It's slightly foggy, but later it's clear, sunny and warm all day. We slowly glide past the Bygdoy peninsula and the Astrup Fernley Museum, we see the mighty Oslo City Hall and the Akershus Fortress.

Our berth is in Bjørvika, opposite the opera house and in front of the Salt building complex, not below Akershus fortress as previously indicated. The "Mein Schiff 4" from TUI Cruises is to anchor there at 10:00.

It is not far from the berth of the Azamara Journey to the train station. There - exactly: in the Ostbanehallen - the tourist information office opens at 9:00am Also today we will explore the sights in Oslo on our own. You can find information in our articles Oslo and Oslo sightseeing.

We buy the day ticket for local transport. We take the T1 line of the Oslo rapid-transit railway, which runs underground in the city center, to the Holmenkollen mountain.

There we want to visit the ski jump of the same name. You can already see it from the ship. The Holmenkollen ski jump was opened in 1892 and is the oldest in the world. It is the symbol of Oslo and is considered Norway's most visited attraction. In 2010 it was renewed. The free-floating hill tower rises 60 meters into the sky. Inside, an inclined elevator leads to the jump area and a viewing platform. 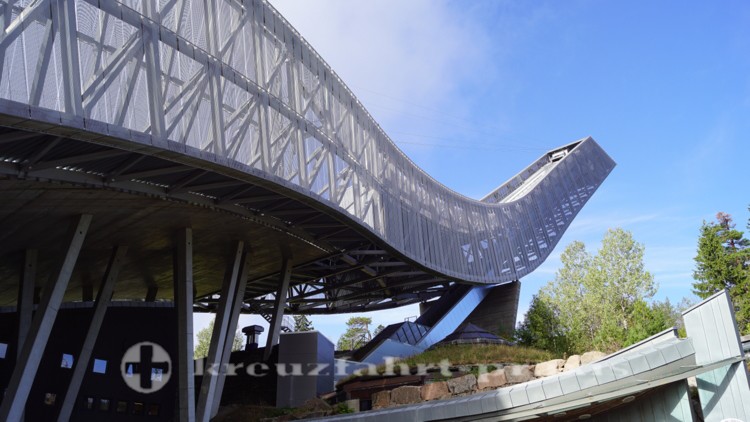 The railway climbs the relatively steep mountain to a height of over 450 meters. The altitude meters are displayed at each train station. We drive through tranquil suburbs and can always look at the Oslofjord and the city. After a 25-minute drive, we get off at the Holmenkollen station at an altitude of 278 meters. It is another 15 minute walk up the mountain to the ski jumping area. The Holmenkollen ski jump is actually a spectacular structure.

We go through the ski museum on the lower floors to the inclined elevator. There is always room for 14 people in the cabin, but we are there early and hardly have to queue. On the viewing platform, we have a 360 degree view of the city, the Oslofjord and the surrounding forests. As we arrive, the few clouds are dissolving. The view is overwhelming.

We go back with the inclined elevator. The brave can also float down on a zipline that runs along the hill. Nothing for us, and we find the price for it quite high at more than EUR 76. On the way back we look at the landing area with the grandstands. Events take place regularly in this arena, for example a band is playing today. It's Sunday and a lot of visitors flock to Holmenkollen.

We take the T1 line back, but get off at Frognerpark. Part of this park is the so-called Vigelandpark. It is the largest sculpture garden in the world created by a single artist. Over 200 bronze, granite and wrought iron sculptures by the sculptor Gustav Vigeland from 1907 to 1943 are installed here. Particularly striking is the 17-meter-high “Monolitten” figure column, which shows the development of people in their life stages. 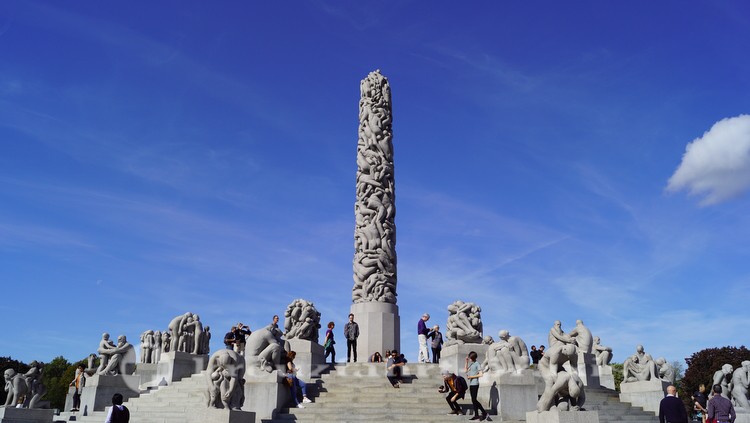 At the entrance of the park we get on the tram line 12, which goes to the main station. We like to take the opportunity to ride a tram because you can see so much during one trip.

At noon we take a break on the Azamara Journey. From the outside terrace of the restaurant we can see the opera house, which opened in 2008. It was built into the fjord as a peninsula and cannot be otherwise described as spectacular. The roof looks like huge ice floes stacked one on top of the other, reaching down to the water. A total of around 20.000 m² of roof area is covered with marble slabs ten to twenty centimeters thick. 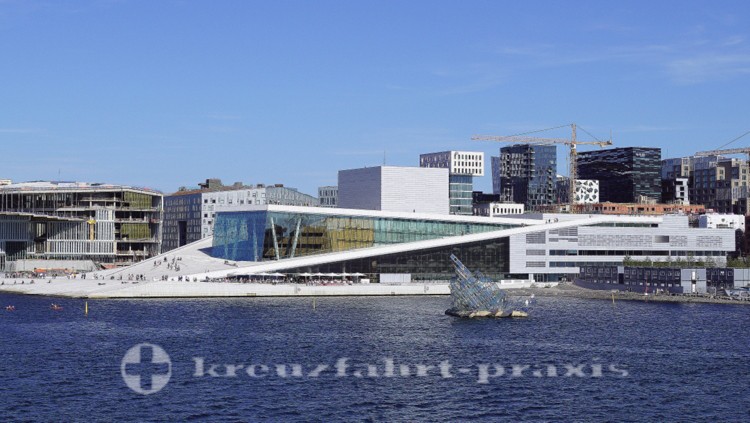 You can go for a walk on the roof. This is also desirable because the people carefully walking on the roof look like waddling penguins from a distance. And in the water in front of the opera house, the sculpture “Hun Ligger” is installed, reminiscent of a floating iceberg.

Our first destination in the afternoon is the Oslo Domkirke. Oslo Cathedral was built in the 17th century and consecrated in 1697. The pulpit, the altar panel and the organ facade have been preserved in the original. A building worth seeing, we find the ceiling paintings particularly impressive.

Arcades were built around the cathedral in the years 1841-1858, which served as market halls. The buildings are listed and were extensively restored in 1960. Today there are shops and restaurants there.

With the tram 12 we go a few stops in the direction of Aker Brygge to the town hall square. We really want to visit the town hall, which will be closed at 16pm The town hall is the seat of the political and administrative leadership of Oslo.

It opened in 1950. The Nobel Peace Prize is awarded here every year. The entrance hall and the publicly accessible reception rooms, which are decorated with motifs from Norwegian history and culture, are particularly beautiful.

The king is at home

We walk across Fridtjof-Nansen-Platz towards Karl Johanns Gate, which leads from the main train station to the Royal Palace. We pass the National Theater and walk directly towards the very beautiful university buildings. To the left we have an unrestricted view of the castle. 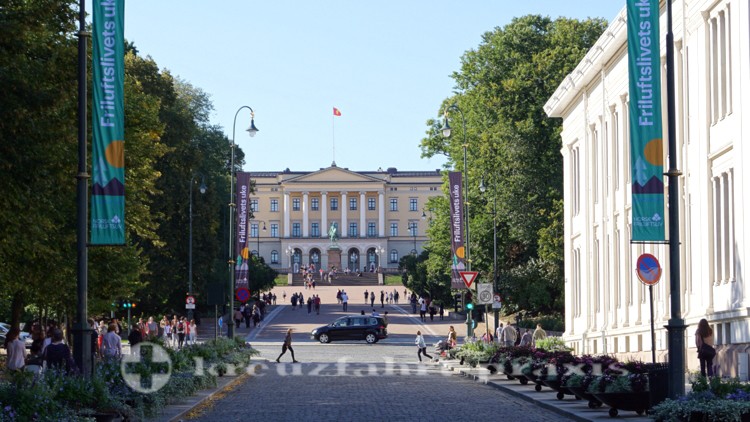 The Norwegian King Harald V lives here with his Queen Sonja. The Norwegian flag flies over the castle. That means: the king is at home. The castle can be visited in the summer months, from late June to mid-August. The changing of the guard of the royal guards is worth seeing.

We walk along the Karl Johann Gate. The street between the castle and the Storting is very representative. There is a park-like median, nice shops and the famous Grand Hotel. The Storting, the Norwegian Parliament, is a massive and imposing building and definitely worth a visit.

At the port of Pipervika

Once again we go to Rathausplatz, this time to Nobels Fredssenter. In the Nobel Peace Center you can find out everything about Alfred Nobel, the Nobel Peace Prize and the prize winners. There are also changing exhibitions, especially on the topics of peace, war and conflict resolution.

At the fjord, in the port of Pipervika, the boats leave for the museum island Bygdoy. 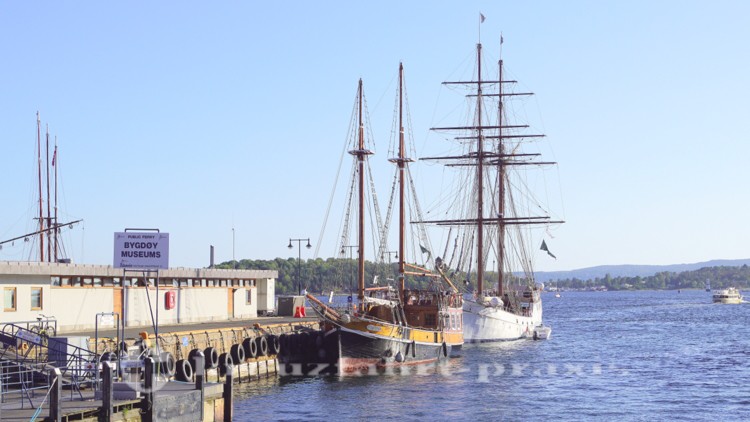 Aker Brygge, formerly a shipyard, now an attractive business and residential area, begins at the western piers. With more than 40 restaurants, the promenade in front of it is a popular meeting place for Oslo residents and tourists.

Akershus fortress is located opposite on a hill. It was built around 1300 as a medieval castle and was converted into a palace in the 17th century. Today the castle is used by the government for representation purposes. There are various museums on the extensive fortress grounds. The view of the harbor, the town hall and the lively Aker Brygge should be worth the easy climb.

Mein Schiff 4 has moored below Akershus Fortress. We saw her in the morning from Holmenkollen when she entered the port. Later - around 20:00pm - we see them driving away through the fjord.

We take the tram to the main train station. Finally, we take a closer look at the opera house. First the open foyer, then we walk up to the roof. And all the way to the top. It is correct: you go down very carefully, the comparison to a waddling penguin is very apt.

At around 19:30pm we are back on the Azamara Journey. There is also a lot going on on the Azamara Journey that evening. The so-called White Night Party is celebrated. That means there is a great dinner buffet outside on deck 9. Tables and chairs are set up around the pool and on the open walkway above. Everything is decorated in white. 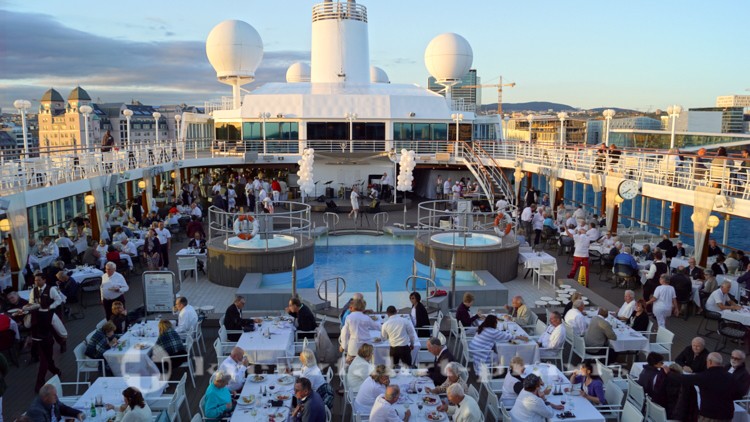 White Night on board the Azamara Journey in Oslo

The food is particularly tasty and delicious. There is an incredible selection of salmon specialties to match the Oslo berth. It's a wonderful evening that we really enjoy.

At 22:00pm the Azamara Journey leaves the port of Oslo. We saw a lot today. Nevertheless, one day is far too little for this lovely city.