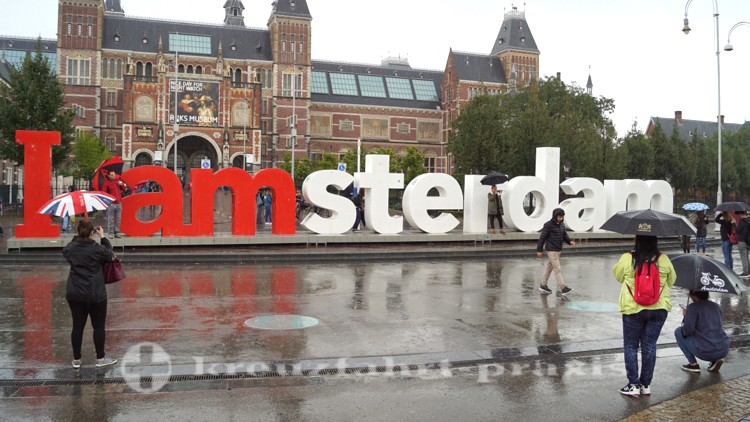 After a wonderful day in Bremerhaven, Amsterdam awaits us with rain. In the morning we drive through the IJmuiden lock into the North Sea Canal and later into the IJ. This is certainly an interesting ride on a sunny day. Today we are not drawn to the outside decks.

The “German Frühschoppen” takes place from 11:30 am, which means that there are regional German specialties. The buffet is set up in the Discoveries restaurant because of the bad weather. Whether sauerbraten, sausages, cabbage, pretzels or apple pie, everything has been thought of. Of course, German beer too. 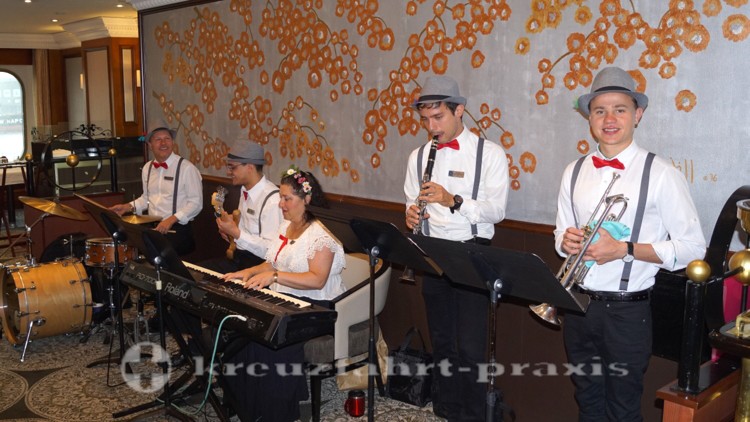 Band at the Traditional German Frühschoppen

And the presentation of the food is tempting. In addition, the “German Band” plays German hits and hearty music. It looks like the musicians of the on-board band have fun with German songs and hits. But the Americans, New Zealanders and Australians who are traveling with you feel visibly at ease with a morning pint.

We arrive at noon Amsterdam. The cruise terminal is not far from Amsterdam Central Station, next to the Muziekgebouw aan't IJ concert hall. Our planned excursion for the afternoon is unfortunately canceled. We wanted to go to the A'DAM lookout. This is a viewing platform on a high-rise opposite the main train station. The building can be seen from afar. The 360 ​​degree view from 100 meters above Amsterdam should be terrific. We prefer to visit viewing platforms when the weather is clear. 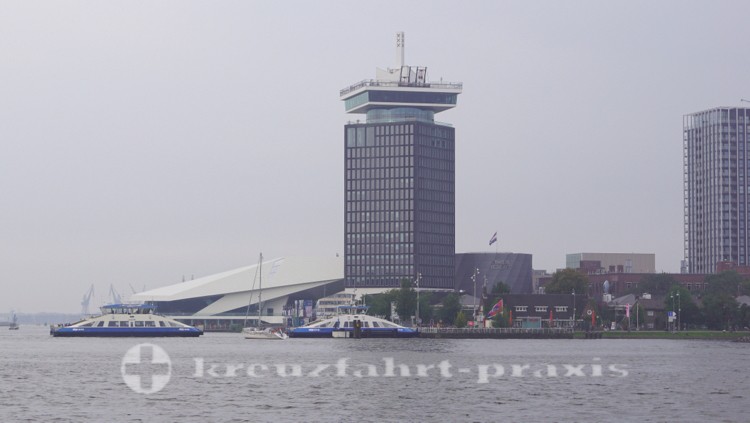 The Rijksmuseum and Rembrandt's Night Watch

Our alternative when it rains is the Museumplein with a visit to the Rijksmuseum. The number 26 tram stops almost in front of the cruise terminal. At the main station we change to line 12 and go to the Rijksmuseum. It is a huge structure. Art and handicrafts, including paintings, silver and porcelain, are exhibited on 12.000 square meters. The large art history library, which extends over several floors, is also worth seeing.

The most famous exhibit in the Rijksmuseum is still Rembrandt's “Night Watch”. And of course, like most of the visitors, we look at this masterpiece.

Between the Rijksmuseum and Museumplein we admire the "i amsterdam-Schiftzug". We walk across the Museumplein, which today resembles a lake. On the right we first pass the Van Gogh Musuem and then the Stedelijk Museum, which exhibits modern art and art installations.

There is plenty of activity everywhere. How good that Amsterdam offers enough variety even when it rains. We are on our way back. A very special event awaits us today: The AzAmazing Evening.

AzAmazing Evening in the former arsenal of Amsterdam

Azamara Club Cruises offers its guests an included evening event on every cruise in one of the ports. During our trip with the Azamara Quest from Dubai to Athens it was an excursion from the port of Aqaba / Jordan to the Bedouins in Wadi Rum.

Today the motto of the evening is “Choral evening at the National Maritime Museum”. 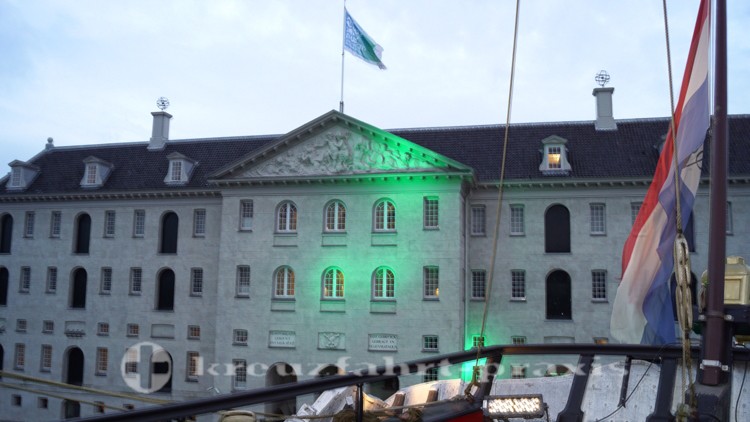 It stopped raining at the start of the transfer. From the cruise terminal, 90 to 100 people each take a canal boat to the maritime museum in the former arsenal. The drive is not far: through the Oosterdoksdoorgang, past the NEMO science museum, it is less than a kilometer. Then the boats moor directly in front of the reconstructed East India sailing ship "Amsterdam". The museum is only open to guests on the Azamara Journey. We can go around and look at the exhibits.

The lively version of the Nachwache

The artistic performances take place in the inner courtyard of the museum under a roof made of thousands of glass fragments. In the evening this glass roof is illuminated by small LEDs and thus resembles a starry sky. The atmosphere is unique. At the beginning, a shanty choir sings well-known sailor songs, followed by a chamber orchestra with two soloists. And finally, a lively night watch marches up and poses on the stage. It's an exciting idea. 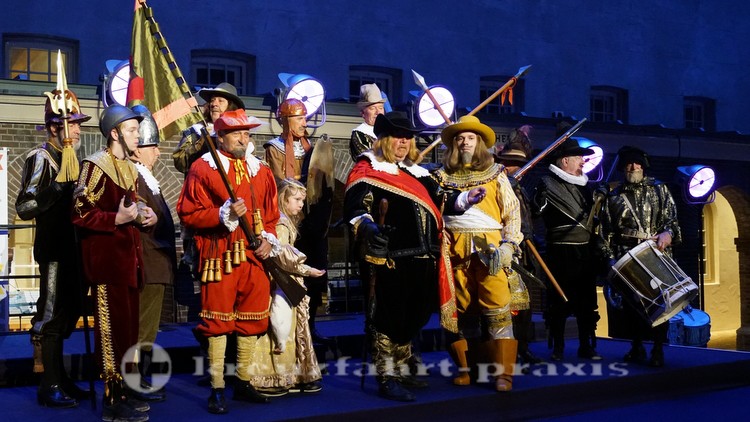 The replica of the night watch

Drinks are also served and, of course, cheese canapés. At the beginning of the evening, the organization of the boats was a bit slow, but the extraordinary event quickly made you forget that. We also go back with the canal boats. An unforgettable evening. We stay overnight in Amsterdam.