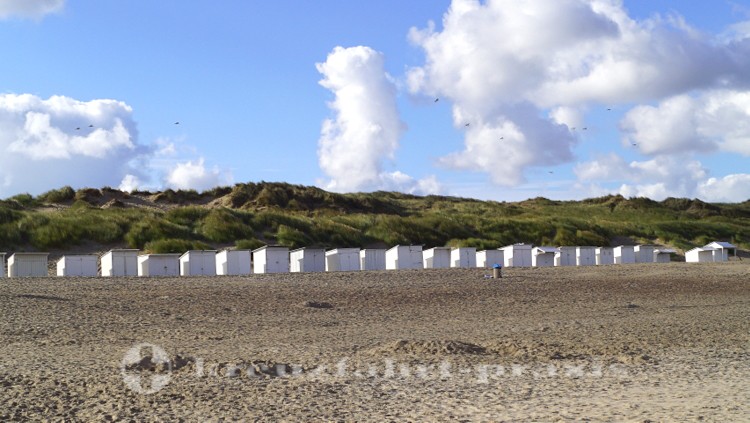 Oostende doesn't look particularly attractive from the water. Many high-rise buildings on a straight coastline do not give a beautiful panorama. The entrance to the port is better. The Azamara Journey enters the Voorhaven around 500 meters and docks right next to Ostend's main train station. You can hardly get any closer to the city. 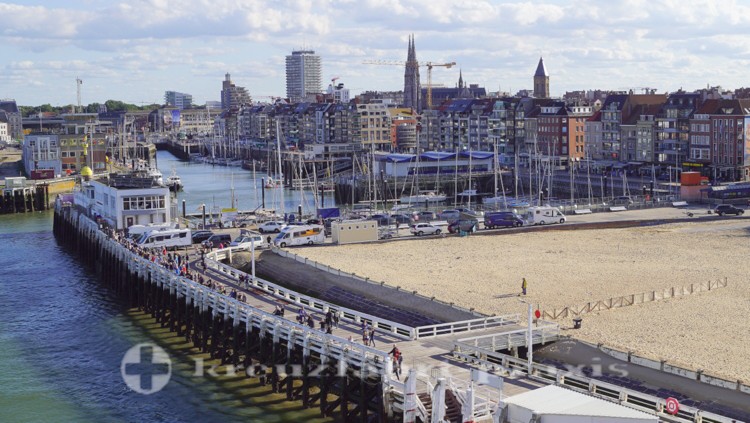 It's nice and sunny again today, and from noon also pleasantly warm. We have never been to Ostend. In the morning we want to see the coast north and south of Ostend, in the afternoon we want to see the city and the port area. Details can be found at Ostend sights.

The coastal tram travels from Knokke-Heist near the Dutch border to De Panne near the French border. This overland tram connects all places on the Belgian North Sea coast. The tram route is 68 kilometers long and almost always runs along the sea. Trains run in both directions three to four times an hour. One of the 69 stations is right next to the Ostend train station. We buy a day pass and start our coastal tram sightseeing in the northeast.

Beach hike on the North Sea

We get off at the fourth stop, in Bredene Strand. Dunes separate the tram route from the water. There is a path through the dunes and we are standing by the North Sea. The beach is wide and firm and far away we see the high-rise buildings of Ostend. We walk a good three kilometers along the beach to Fort Napoleon. The wind blows strongly, it is really fun to walk along the water.

Fort Napoleon is located in the middle of the dunes. The imposing old walls have been extensively restored. There is a modern museum, restaurants and meeting rooms. The buildings are also used for exhibitions and festivals. Behind the fort is the De Lange Nelle lighthouse. It is still in operation and not accessible to visitors. 324 steps lead to the 65 meter high lighthouse. The view of Ostend and the sea must be overwhelming.

At the Atlantic Wall

We go to the next stop on the Kusttram. This time we drive to the southwest, through Oostende to Raversijde. There is the Atlantic Wall Museum. On the promenade we go towards Ostend. Now we have the wind against us. The promenade runs above the beach, then come the railway line and driveway, then the dunes. From the promenade we can still see a lot of the former bunkers and flak positions of the Atlantic Wall. 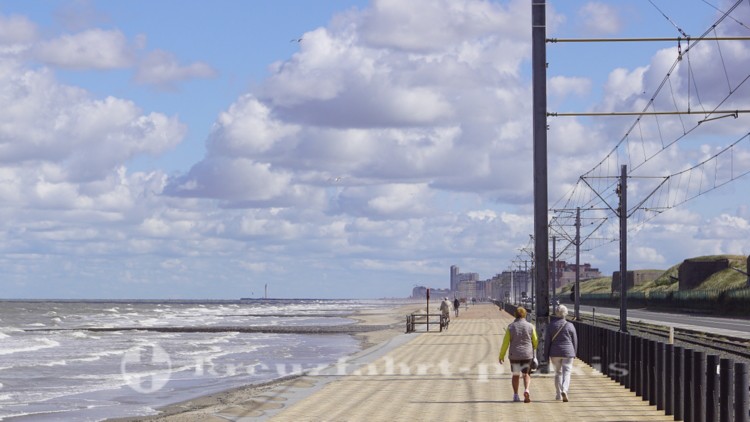 Beach and tram line at Raversijde

At the next station we wait for the tram and drive back to Ostend. On the south-western side of Ostend you almost always have a clear view of the sea, and the trip on the coastal tram is actually sightseeing.

We spend our lunch break on the Azamara Journey. Because it's warm and sunny, we sit on the terrace of the Windows Café.

In the afternoon we take a look at the place. We pass the train station and the Amandine trawler. It belonged to the Ostend Icelandic fishery and is now an interactive museum. In the Mercator marina we admire the three-master of the same name, a former sailing training ship of the Belgian merchant shipping. Then we follow the Kapellestraat shopping street to the beach.

The seaside resort of Ostend

Ostend is the most famous seaside resort in Belgium. The wide beach promenade extends over the entire sea dike and is lined with street cafes and restaurants. The sand sculpture festival is currently taking place with performers from all over the world. Behind the fenced area you can see figures and buildings on the themes of Disney World and Star Wars. We walk around the headland towards the harbor. There are unusual red sculptures called Rock Strangers. Then the fish hall, the North Sea aquarium and the fishing quay follow. From there you can cross over to the other side of the harbor to the Lange Nelle and Fort Napoleon.

Our last destination is the Sint-Petrus-en-Pauluskerk opposite the Fischerkai. It has particularly beautiful glass windows. The second tower behind the church is also unusual. It belonged to the Sint Pieterkerk, which burned down in 1896. Only this tower, called the Peperbusse, remained.

The Azamara Journey was supposed to leave at 17:00pm However, we have a delay because two fellow travelers are missing. Therefore, additional formalities have to be completed in the port before we can cast off. The guests then have to watch as they get back on the ship. 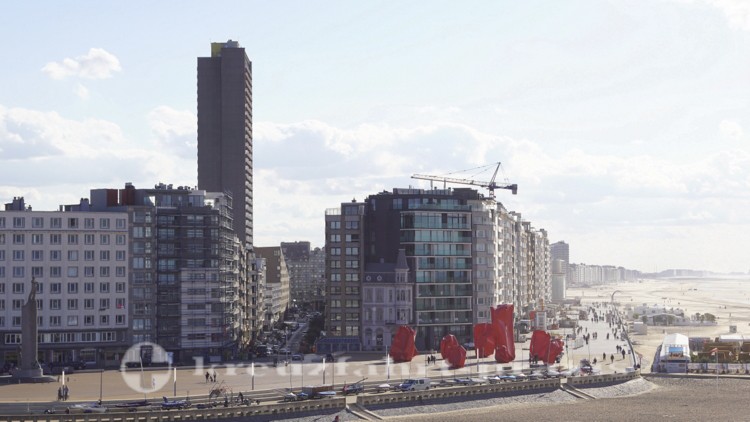 Ostend is an attractive cruise destination

We liked the Ostend region a lot. The many high-rise buildings initially put us off. But then we discover the wide beach, the dunes and the seemingly endless promenade by the sea. That has something.