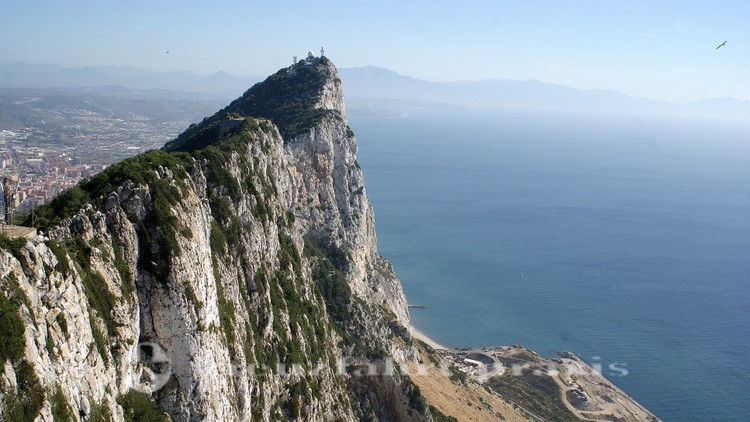 Today it will be "very British". We arrive in Gibraltar, the only British overseas territory that is part of the EU. Gibraltar is at a crucial point on the southern tip of Spain. This is where the Atlantic Ocean and the Mediterranean Sea meet, Europe and Africa are only separated by the narrow Strait of Gibraltar.

The most famous inhabitants of the strategically important rock are the Barbary macaques, which have lived there for over 200 years. They are the only wild monkeys in Europe. It is said that Gibraltar will remain British as long as this Monkeys live on the rock. A lot is being done for this. The animals are properly fed, regularly looked after by a veterinarian and enjoy a fair amount of freedom from fools.

Top of the Rock

We will also explore today's destination individually. In Gibraltar this is easy to do on foot and by public transport. More than 40% of Gibraltar is a nature reserve. Many routes are steep and impassable and require a lot of fitness. We walk about 1 ½ kilometers from the cruise terminal to the bus station at the North Bastion on Casemates Square. Then we take the bus to the cable car valley station, the cable car that takes us to the 400 meter high cliff in just a few minutes. From the Top of the Rock, the highest point at 426 meters, we have the perfect 360 ° panoramic view. Africa lies in the south, with the Strait of Gibraltar far below us. In the north lies Spain. The four-lane road to it crosses the runway of Gibraltar Airport. That is unique in the world.

From the Top of the Rock we want to walk back to the place, past O'Hara's Battery, St Michael's Cave and the Jews' Gate. On the sloping road, we also see the first Barbary macaques that move around the area without fear of the many spectators. Most visitors come to the rocks in minibuses and taxis. The road is accordingly busy and the many vehicles often jam. Glad when we turn to O'Hara's Battery.

Again it goes to an altitude of 420 meters. From above you can see the southernmost point of Gibraltar, Europa Point with Trinity lighthouse and mosque. The Mediterranean Steps also begin at O'Hara's Battery and lead down to the Jews' Gate at 180 meters. These steps lead down the steep cliffs of the east coast, then around the southern tip, always with a view of the Strait of Gibraltar. 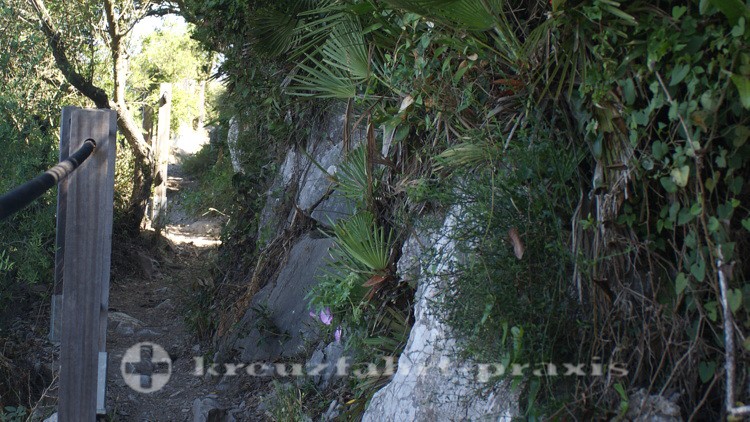 The steps are uneven and sometimes very steep, it is an adventurous path. We look at the beginning of these steps and decide on the more comfortable route across the street to St Michael's Cave. The caves are a popular destination for excursions. It is so crowded that we decided not to visit it. Then we follow an arduous footpath through the rugged terrain to the Jews' Gate. There we leave the Upper Rock nature reserve. The path becomes very easy now. After a few 100 meters we reach a bus stop and get on the next bus to the beginning of Main Street.

Main Street leads from Casemates Square almost to the cable car valley station. Important representative buildings are located there, at the same time it is a popular shopping street and in major parts of it traffic-calmed. There are very nice bars and shops, all very British - Marks & Spencers are also represented. We enter Main Street at the Referendum Gate, pass the Inces Hall Theater, the Governor's Residence, the King's Chapel and then the Anglican and Roman Catholic Cathedrals.

At the very picturesque John Mackintosh Square we change to the Irish Town, which runs parallel to Main Street, a pedestrian area with many, especially Irish pubs and restaurants.

At Casemates Square we get on a bus again to see the south of Gibraltar. We're going to Sandy Bay. This is a tour that we could have done without. Sandy Bay is just a normal little beach, nothing particularly exciting. We would have better looked at the WWII tunnels which are supposed to be very interesting. We have to do that next time. We return the same distance by bus and slowly make our way to the ship.

We leave Gibraltar at five o'clock. This departure, from the port around the rock and through the Strait of Gibraltar, is of course absolutely amazing. We sit on the outside deck of the buffet restaurant on deck 14 and enjoy every moment until the rock can no longer be seen. 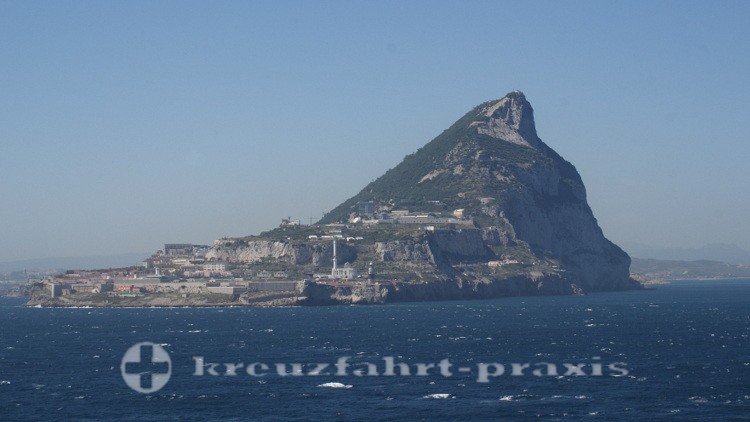 Gibraltar from the south