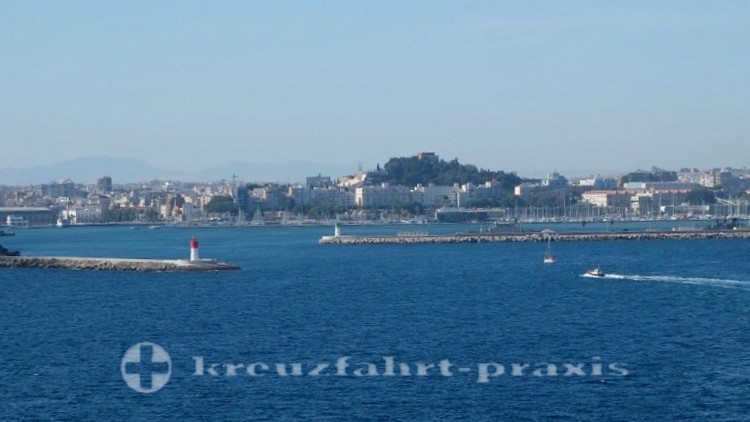 Cartagena is located in a deep bay on Spain's Costa Cálida. The large natural harbor serves mainly as a trading port, but cruise ships also run Cartagena in Spain regularly. The pier is located parallel to the well-tended promenade, separated by the marina. Immediately behind it are the well-preserved Punic city walls, and above the Castillo de la Conceptión. 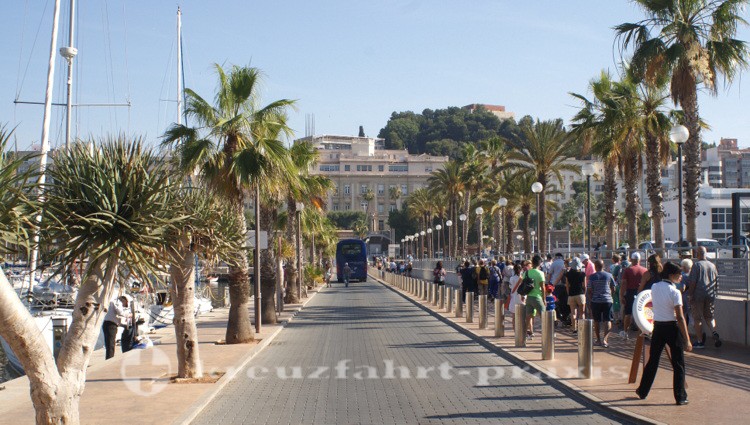 Promenade at the cruise terminal and the fort

Cartagena is like a history book come alive. Phoenicians, Romans, Moors: everyone was here. We find buildings from many epochs, for example Punic walls, a Roman theater, a Moorish castle; and all in walking distance to the cruise terminal.

We have prepared a tour so that we can see as much of this attractive city as possible. On the promenade below Paseo Alfonso XII, we walk along the water towards the Nautical Museum. In the harbor basin in front of it, next to the striking building of the regatta club, we are surprised by the sculpture Cola de Ballena, the tail fin of a whale. Across the street in a small shipyard are the sailing yacht A and the superyacht A of the Russian billionaire Melnichenko. It is very seldom possible to see both ships at the same time. So we're really lucky.

We keep to the right and cross a small, well-kept park, the Plaza de los Héroes de Cavite, then we come to the Plaza del Ayuntamiento, the town hall square, and the town hall. It's one of the most beautiful we've ever seen. 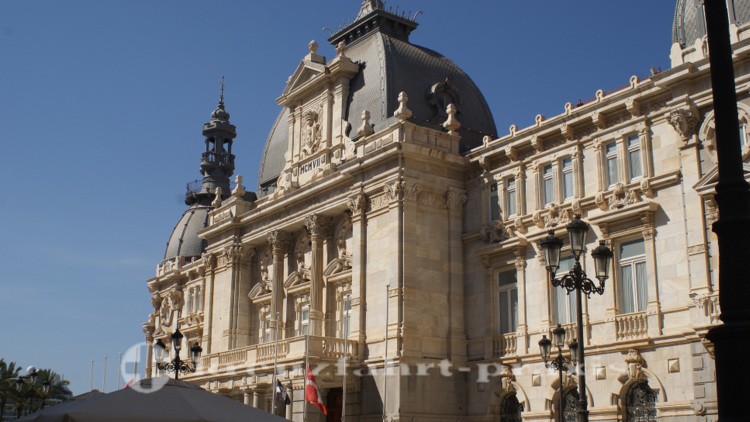 Facade of the town hall

Again we turn right and next to the ruins of the old cathedral we reach the Roman theater. The theater was built in the 1st century BC and was only discovered in the late 1980s. It has now been carefully reconstructed and has been open to visitors since 2008. It is the highlight of the Roman excavations so far and should definitely be visited.

We go back to the Town Hall Square and follow Calle Mayor, a pedestrianized street with beautiful Art Nouveau buildings. The highlight of these buildings is the historic Gran Hotel in Plaza San Sebastian.

The next Roman excavations can be found in the Barrio del Foro Romano, the Roman Forum. This is a complete block of houses from Roman times with a thermal complex, arcade courtyard and atrium; the complex is extensively roofed to protect it from the weather. And beyond, on the Cerro del Molinete, the Windmills Hill, an area of ​​immense dimensions, the archaeological excavations continue. It's incredible.

Everything is close together in Cartagena. Again and again we discover a beautiful building, a small park or square. For example the Plaza San Francisco, a large square with tall trees, well-restored old buildings and shady benches. This is followed by the Plaza de la Merced with the Palacio Aguirre, from which a promenade leads up to the Muralla del Mar campus. On the spacious square in front of it is the old bullring, under which a Roman amphitheater is waiting to be excavated. So far only some of the outer walls can be seen. In Cartagena, the Romans were actually very active. 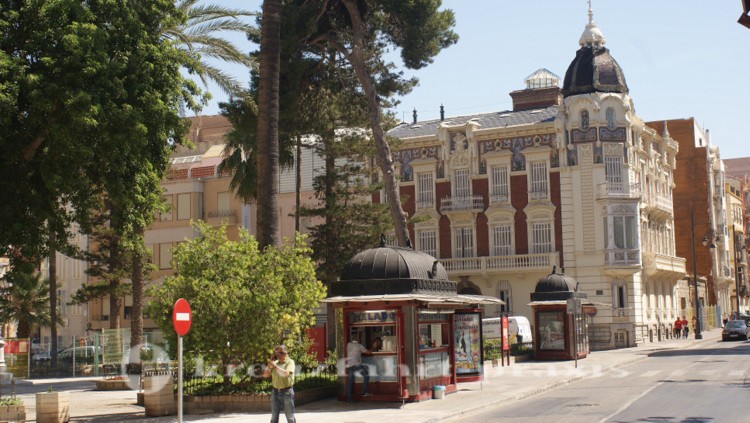 Our next destination is the Castillo de la Conceptión, a castle complex built by the Moors. We climb past the old bullring to the Castillo. There is a lift up to 45 m with a gangway to the hill of the castle. Not much of the castle has survived, but some rooms and vaults are presented in a historical center, which is very worth seeing. But best is the view from above. We look directly into the Roman theater and auditorium, the city walls are easy to see, the promenade, the harbor, the bay. We go back over stairs and shady paths to the harbor.

In the afternoon we take another stroll through the town. We walk back along the water to the Museo Naval, which we take a closer look at this time. Unfortunately we do not see the famous submarine “El Peral”. It used to be outside directly on the promenade, but now it has a place in the museum to protect against wind and weather. We also take more time for Calle Mayor and the picturesque side streets. Cartagena is a very beautiful, clean and well laid out city. It is a pleasure to be there. We go back to the ship through the green area on the city wall. 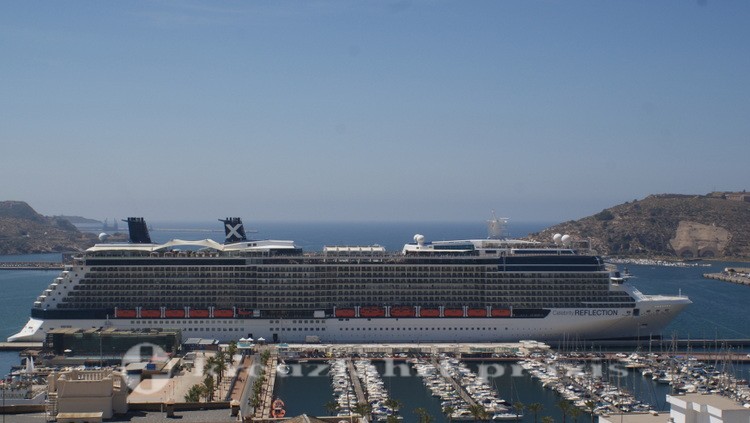 Cruise ship Celebrity Reflection in the port of Cartagena

For this evening we have received an invitation from the Captain's Club to the Senior Officers' Cocktail Party. We will not miss that. The meeting takes place in the Sky Lounge and in fact almost all officers are there. Also the master of the ship, Captain Apostolos Bouzakis. During a Caribbean cruise with the Celebrity Equinox, he was our captain once before. He was born in Greece and we have fond memories of his on-board announcements. They always ended with "I wish you a wonderful day on the beautiful Equinox", performed with an unmistakably Greek accent. Not only at a party of the Captain's Club, the master and his officers are also very present on board and take time for the passengers. 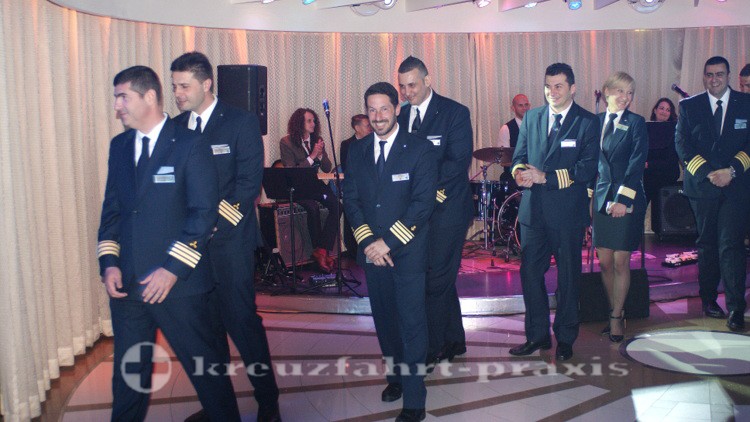