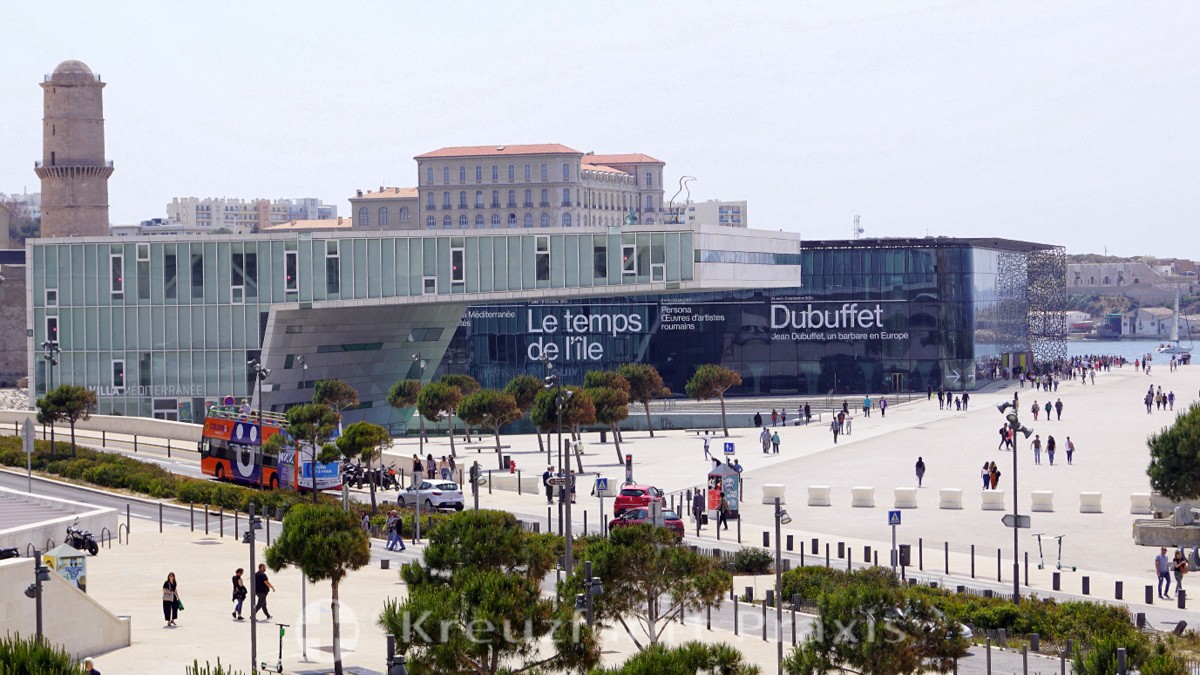 Large cruise ships like the Costa Fortuna dock in Marseille about eight kilometers from the center. The port administration operates a free bus that stops at the exit of the three cruise terminals. The route there is marked by a green line and cannot be missed.

Marseille on your own

As so often, we will explore Marseille on our own. In our post Marseille sightseeing you will find detailed information about our stations today. We walk 10 minutes from the Costa Fortuna to the stop. The bus goes to the exit of the port. Opposite is the Joliette metro station. 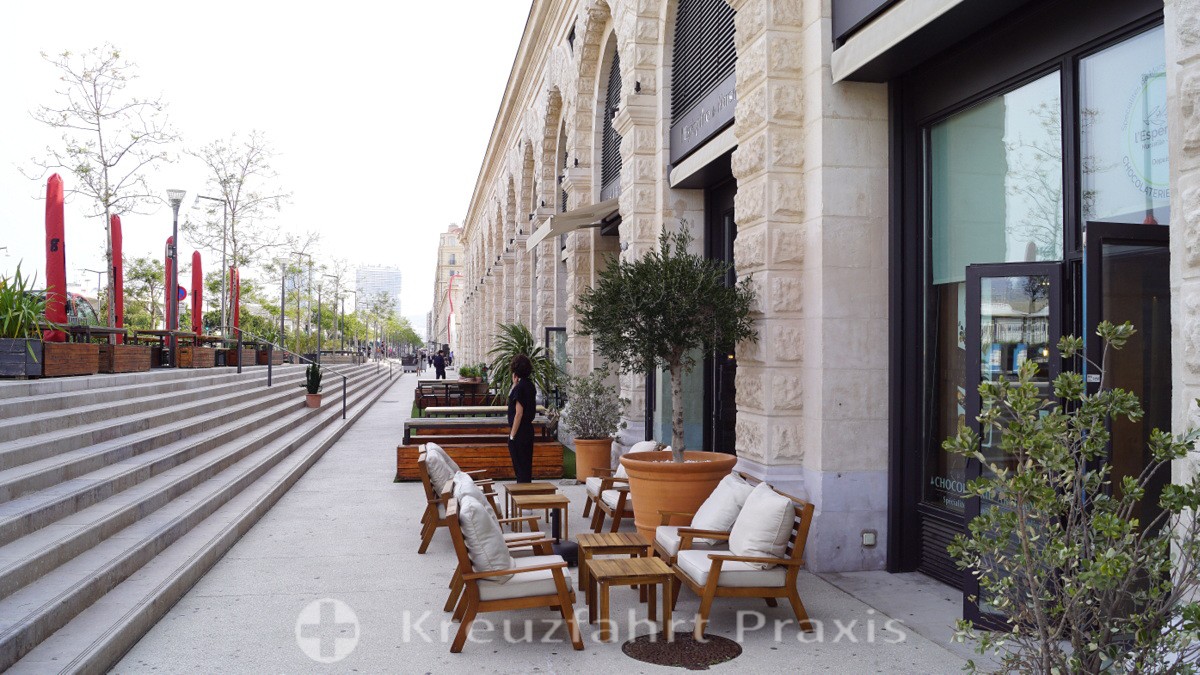 However, we walk along the promenade that was newly laid out in 2013 on Quaie de la Joliette towards Fort Saint-Jean. In 2013, Marseille was the European Capital of Culture and many of the old quarters have been turned inside out. This mainly included the port area. Manufactories and restaurants moved into the restored warehouses on the promenade. Less than a kilometer away we pass the elevated cathedral.

And a little further, directly on the water, we admire the MuCEM museum complex and the Villa Méditerranée cultural center. Both were rebuilt in 2013.

By bus to the Notre-Dame de la Garde basilica

The local bus starts in front of the mighty Fort Saint-Jean and takes us to the Notre-Dame de la Garde basilica. The bus drives around the old harbor basin, then it goes over steep roads up the hill on which the pilgrimage church is located. A lot of people had the same idea as us because it's pretty crowded. One reason for this is certainly the fantastic view from above of Marseille, the sea and the small islands. And Notre-Dame de la Garde is also a worthwhile destination.

Back we take the bus again. For 2 EUR you can travel by public transport in Marseille for an hour, regardless of whether it is the metro, bus or tram and in which direction. Everything is very simple. Buy and validate a ticket and travel for an hour.

We get off at Rue Fort Notre Dame and go down a wide staircase to Place aux Huile. There are nice cafes and restaurants here.

There are also many people at the old port, and all of Marseille seems to be on the move. However, it is warm and sunny and it is also the weekend. Where the passenger ships dock, we admire Norman Foster's L'Ombrière shade roof. The lower part is mirrored and offers surprising visual effects: must see. 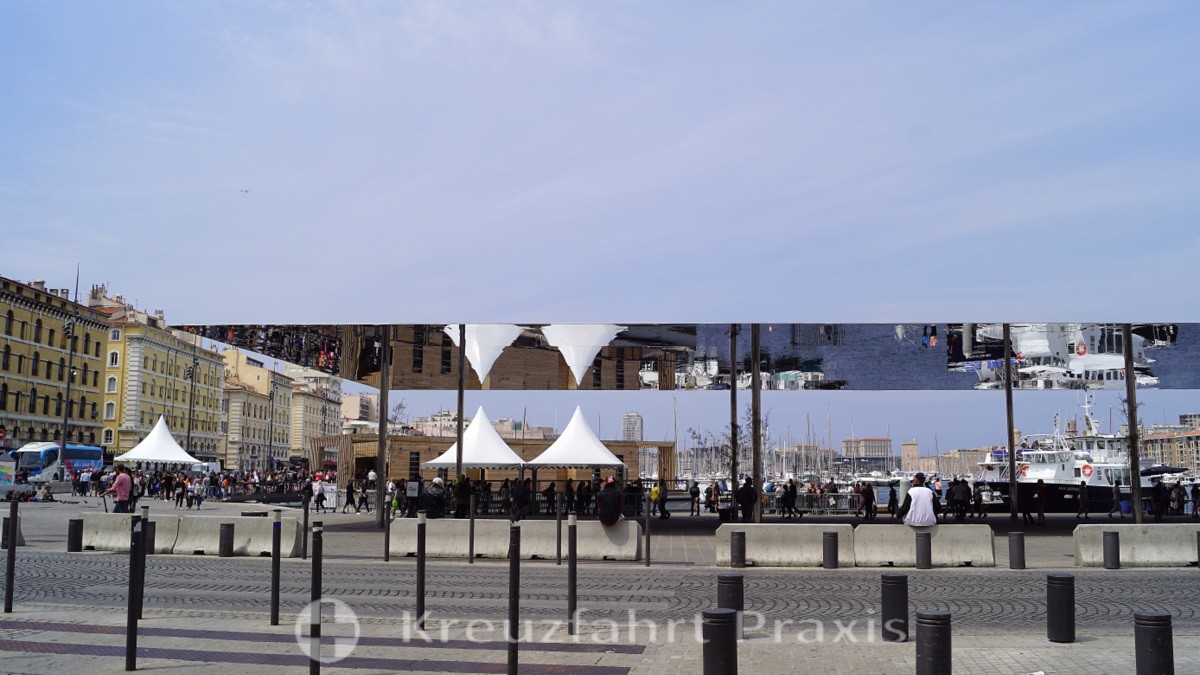 We continue to the Opera and Canebière, the former boulevard of Marseilles. Beautiful old buildings such as the former trade exchange, a historic carousel and the Lafayette gallery can be seen here.

After a good 500 meters we get on the tram and drive to the Palais Longchamps.

The representative building was planned and built as a water reservoir; today it houses two well-known museums: the Museum of Fine Arts and the Museum of Natural History. In the extensive Longchamps Park there is also an observatory, a theater and a zoological garden.

We'll go back by tram again. We actually want to get off near the Porte d'Aix triumphal arch, but we don't get far. Parts of the city are closed due to various demos on the occasion of the European elections. However, we do not hear of riots like the day before yesterday in Genoa. We go to the Porte d'Aix on foot. The triumphal arch is worth seeing, unfortunately the area around the square on which it stands is not. For the first time we see littered and dirty streets, house entrances and courtyards.

In the Panier district

Our next destination is not far away. Over the old city wall we get to the famous Panier quarter. I like this old town very much.

There are original shops, small factories, bistros and restaurants and the restored Vieux Charité. The former poor house in Marseilles has been upgraded as part of the Capital of Culture projects, but also through tourism, arts and crafts.

We leave the Panier quarter at the cathedral and take time for an extensive tour of this impressive church. 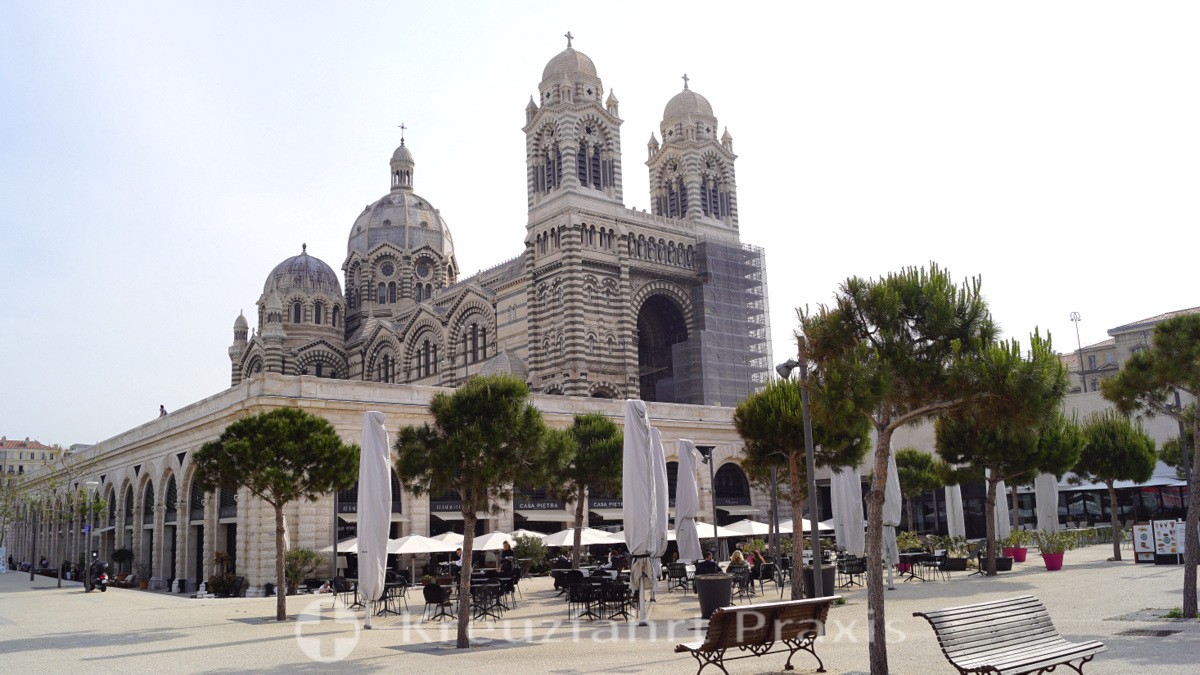 Then we stroll back over the Quaie de la Joliette to the bus station at the port entrance. The port bus brings us back to the Costa Fortuna. Two more cruise ships are moored at the terminals in Marseille today: the Seven Seas Navigator and the MSC Bellissima.

I liked Marseille very much. There is a lot to see and it is easy to get to the sights by public transport or on foot. Marseille is clean, except for the Porte d'Aix area, and we felt safe everywhere. 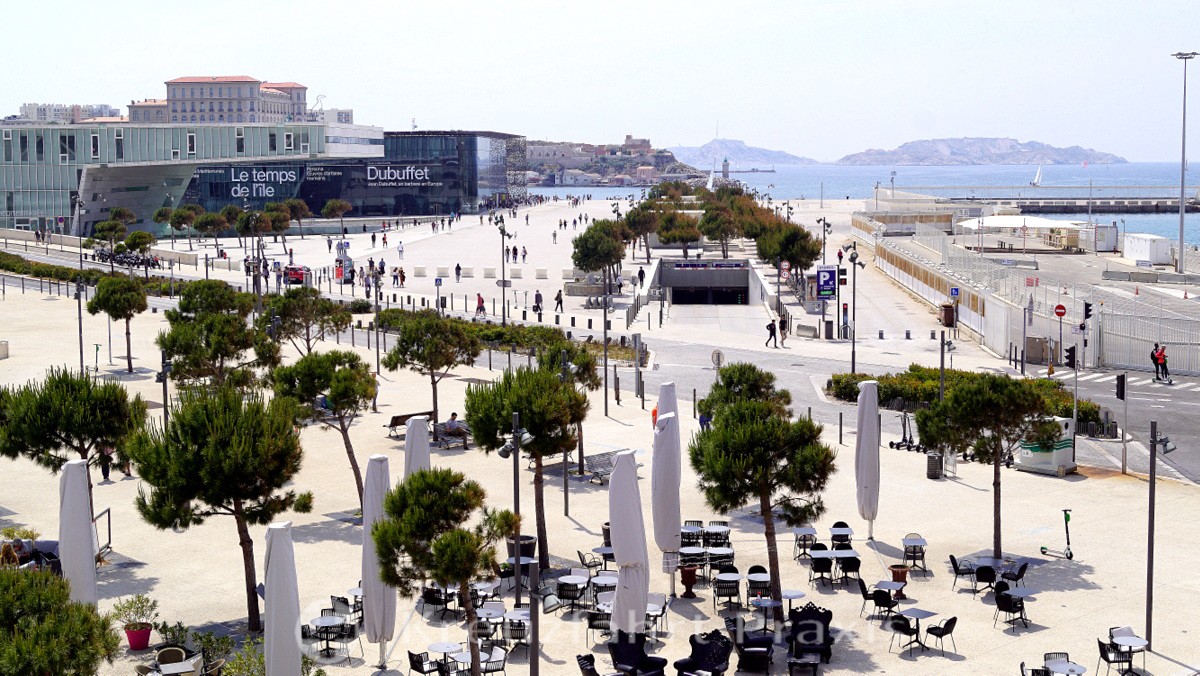 The MuCEM from a bird's eye view

The Costa Club Show takes place in the theater in the early evening. I don't like it at all. Everything is under the motto: we are Costa! I feel like I'm in a promotional event for Costa, not a show.