The destination Malta was added to the program at short notice instead of the city of Naples. For whatever reason, the ship was not allowed to visit Naples. So it had to be rescheduled. As a noble gesture, the guests received a “compensation” of US $ 100,00 per cabin. 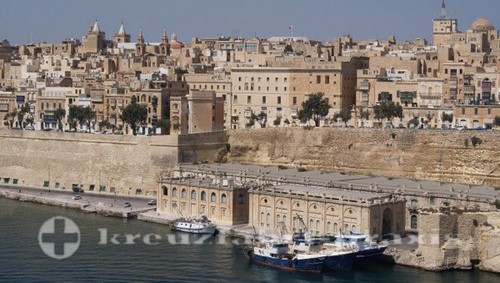 So we are eagerly waiting for that Malta emerges from the sea in front of us. At about 11.30am it is time to see the huge rock looming up. Soon afterwards the guests crowd on the foredeck. Past a drilling platform and many ships lying in the roadstead, the Mariner of the Seas pushes towards Valletta. The bastions of the city are particularly impressive from the sea. Fort St. Elmo in particular looks enormous. The question arises as to how the 311 meter ship should be brought through the narrow entrance of the Grand Harbor. The layman is amazed how the ship's command and pilot manage to run past the jetties into the port and turn the ship. By the way, Mein Schiff 1 is already in the harbor, which we still have fond memories of two trips. You like to see good old friends again.

The stay on this Sunday is a bit short: from one o'clock in the afternoon to nine in the evening. So what should you do if you don't want to take part in organized tours? You look at Valletta and do without the old capital Mdina, which is located on a plateau about ten kilometers from Valletta. We also know Malta from several previous stays. We know that everything in the urban area of ​​Mdina is worth seeing. But with such a short stay, one should concentrate on Valletta. Especially when the temperature is 30 degrees in the shade. The tour of Valletta brought back memories. We enjoyed Valletta and will remember it for a long time. At some point everything has an end. Shortly after nine o'clock the ship sneaks out of the harbor. We look again at the lighted bastions before we go to dinner.