The district town of Kuşadasi on the Turkish Aegean coast is visited by cruisers because of its proximity to ancient Ephesus. The city with approx. 60.000 inhabitants has a large marina and an efficient port for cruise ships, which handles 400.000 guests annually. Next to us lay the Azamara Quest and the Wind Star from Windstar Cruises. Later the Wind Spirit joined them. Before leaving, another ibero cruceros ship, the Grand Celebration, turned up. In terms of appearance (meaning the chimney), the ship looked like a Carnival ship. No wonder, behind ibero cruceros is Carnival, among others. 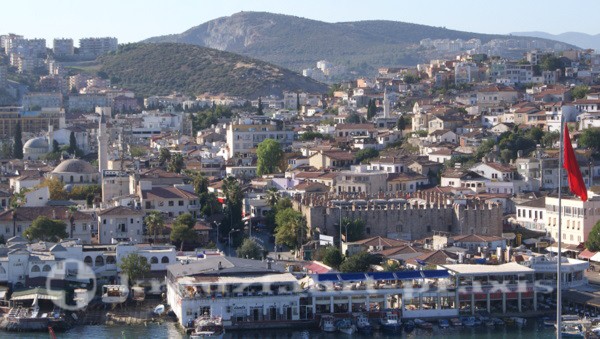 The city doesn't just live from its port. It is also a popular travel destination. In the main season, the city is said to have around 300.000 residents. - Now in September the hype has calmed down. The city makes a pleasant and tidy impression. Here, too, the ships dock in the middle of the city. You leave the fenced harbor and find yourself in the city. The palm-lined promenade is only a few steps away. Restaurants and shops are waiting for customers. The bazaar: in sight. Also within sight of the ships is Pigeon Island, on which there is a fort. Glass bottom ships and other excursion boats depart from the pier in front.

A trip to ancient Ephesus, 15 km away, is a must! Royal Caribbean is offering the ½ day tour for US $ 79,00. There is another way. We report on this in our article Kusadasi and Ephesus. The individual tour takes about 4 hours. After returning and a short stay on the ship, we went through the town again. Our final impression: A well-kept holiday resort with nice shops and bars, which is very busy during the main season.