On the eighth and ninth days, Istanbul is on the program. The first impression: Seen from the Galata Bridge, we are in fourth position. In front is the Nieuw Amsterdam of Holland America Line, which we always like to see. The ship looks so high class. It follows the Costa Favolosa. A Cunard ship, the Queen Victoria, is moored at position three, in front of us. Taken together, these four ships represent approximately 425.000 tons. And there is space for more than 10.000 passengers.
From the ship we have an excellent view to the west of the old city with the Topkapi Palace, Hagia Sophia and the Sultanahmet Mosque (Blue Mosque). The Galata Tower and other mosques complete the view. To the east we look at the Kabataş pier and the Dolmabahçe Palace. In front of us the Sea of ​​Marmara, behind us the Bosporus. 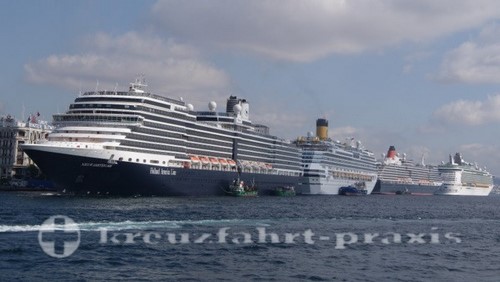 Cruise ships dock on the Karaköy bank below the Galata Tower, near the Galata Bridge, over which the morning traffic pours into the Sultanahmet district, the old center of the city. The city on the Bosporus and the Sea of ​​Marmara overwhelms the visitor. Nobody can say exactly how many people live in Istanbul on the European and Asian sides. There is talk of 13 to 16 million inhabitants. We thought we knew Istanbul from several previous stays. However, 15 years had passed since the last visit. The city has developed rapidly during this time. Just as the country has developed into one of the most productive economies, with rapid growth rates in GDP. - Istanbul's vehicle density is enormous. It feels like you're constantly stuck in traffic. This also applies to the many buses and taxis. The modern, air-conditioned trams that run on their own routes are particularly suitable for our sightseeing program. With them you can get to the desired destination quickly. Passengers only need to be interested in line 1, which runs between Kabataş and Zeytinburnu in the west. You can buy a token at the machine. This then grants access to the delimited platform. A super system. In the rush hour, the waiting times are quite short. The stations are displayed acoustically in Turkish and English as well as visually in the car. The display also shows in which direction the exit is. 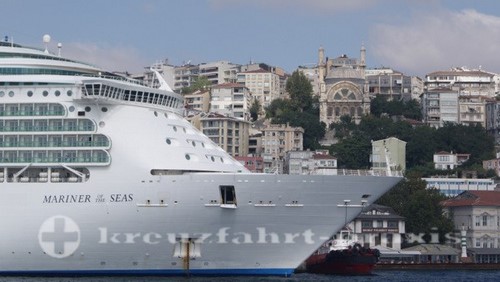 In contrast to Kuşadasi, where the euro is the most common currency, in Istanbul you can't do without the Turkish currency (TL). Where do you trade? The Meclisi Mebusan Caddesi runs behind the docks. There are several banks on this street that can quickly exchange your money. A waiting number must be drawn when entering the ticket office. 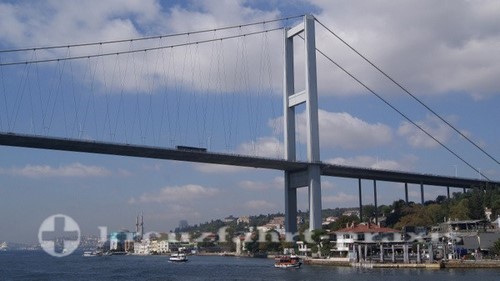 What do you do with your time in Istanbul now that you have the local currency in your pocket? If you are staying for two days - as we have experienced - we recommend a trip on a liner on the Bosporus on the first day. In the evening you should visit Taksim Square and stroll through Istiklal Caddesi towards the Gala Tower. For several years now, Taksim Square has been easily accessible from the Besiktas jetty using the Füniküler funicular. On the second day, focus on the top five of Istanbul. In detail these are: Topkapi Palace, Hagia Sophia, the Blue Mosque with its six minarets, the Grand Bazaar with its thousands of shops and the Yerebatan Cistern (sunken palace). In our opinion, you can safely do without the frequently recommended Theodosian city wall. For more details see below Istanbul and Istanbul landmarks. 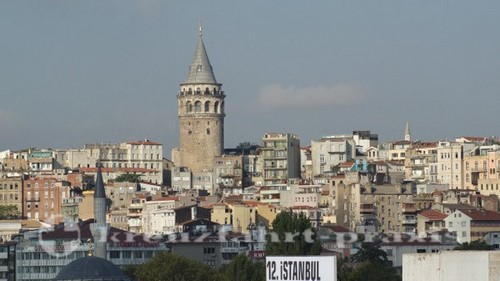 The shipping company offers guided tours over 1 or 1 ½ days for guests who do not dare to visit this huge city individually. On one of the days there is also a mini-Bosphorus cruise with the liner. The prices for these tours range from US $ 139,00 to US $ 149,00. Not exactly a small amount, although the entrance fees for the sights are already included in the price.

It is much cheaper individually. However, one thing should be noted. Guided tours have priority at the sights. However, we are experienced in waiting and choose the individual. It's just more fun. Istanbul offers endless things to see. If that becomes too much for you at some point, the tram will reliably bring you back to the ship.