The cruise ship dock in Arrecife at Puerto Naos is brand new. It is only 300 m from the ship to the tourist information office and the car rental company, and the town is less than 2 km. We had already booked a rental car in Germany and planned what we wanted to see and also largely determined the route for it. It is a Seat Leon with which we will conquer Lanzarote today.

By rental car to the Timanfaya National Park

We leave Arrecife towards the north, drive through Tiagua and Mancha Blanca and reach the Montañas del Fuego, the mountains of fire, of the Timanfaya National Park. South of the fire mountains we stop at the visitor center of the national park. The building crouches in the rocky landscape, the exhibition is worth seeing and very informative, a guided tour even simulates a volcanic eruption. Then we continue into the Timanfaya National Park. You can use your own vehicle as far as the Islote de Hilario car park. At the building complex designed by César Manriques with restoration and information, you get on tour buses that take you through the Montañas del Fuego, the mountains of fire. The approximately 14 km long tour is included in the entrance fee to the national park and takes 50 minutes. The buses stop in places with particularly blatant prospects. The Timanfaya area is breathtakingly beautiful. The strict regulations, e.g. that nobody is allowed to enter the area alone, have proven their worth. However, one should visit the Timanfaya area as early as possible in the morning. Then you can make good progress everywhere, there are no waiting times at the entrance to the park or on the tour bus. When we leave the national park at 11:30am, there is already a long traffic jam to the parking lot.

From Yaiza to Playa Blanca

Our next destination is El Golfo. On the way there we stop in Yaiza. It's a pretty little place with white houses and lush flowers in front of the panorama of the Fire Mountains. In contrast to the tourist resorts by the sea, it is quiet and contemplative here, so it is a good place for a little rest. You could also do that in El Golfo, which is known for its good and at the same time picturesque fish restaurants. However, we only make a short stop. In front of the site is the El Golfo lagoon with the Charco Verde, a volcanic crater that is partially submerged in the sea and that is supplied with seawater from the underground. Rare algae provide the green color. 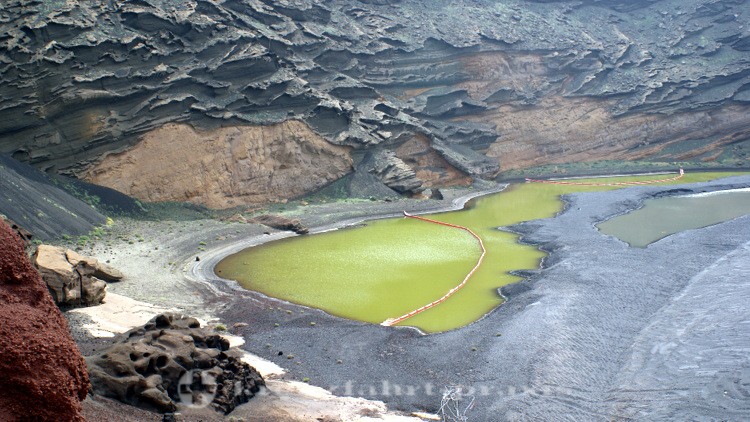 In a southerly direction we drive past the impressive rock formations Los Hervideros to the Salinas de Janubio, the largest salt production plant in the Canary Islands. About  a fifth of the entire facility is still used today for salt production. The area is worth seeing for tourists because of the salt hills and the historic windmills, but the special thing is the salt basins, which glow in different colors depending on the time of day or the position of the sun.

We still have time to visit Playa Blanca on the south coast. Fuerteventura is just opposite, from Playa Blanca there are regular ferry connections there. Otherwise, Playa Blanca is a usual tourist destination with hotels, shops, restaurants, but in a beautiful location and with great beaches, the Papagayo beaches.

On the way back to Arrecife we ​​cross La Geria south of Timanfaya, the largest wine-growing region in the Canary Islands. The special thing about La Geria is the way in which wine is grown here. In order to get to the fertile soil under the lava layers, funnels were dug for the individual vine plants and additionally protected from the sometimes strong wind with semicircular walls made of lava. A laborious but successful process. The winemakers on Lanzarote produce around 5 million liters of wine per year. You can try the wine at the wineries, and of course there is also a Museo del Vino, a wine museum. In addition to the mountains of fire, La Geria is the highlight of Lanzarote for me. Our tour ends with Puerto del Carmen, the largest tourist resort on the island, which stretches for around seven kilometers along three beaches. The beach promenade and the old town center around the harbor are beautiful because you can still find some original, Mediterranean flair here. 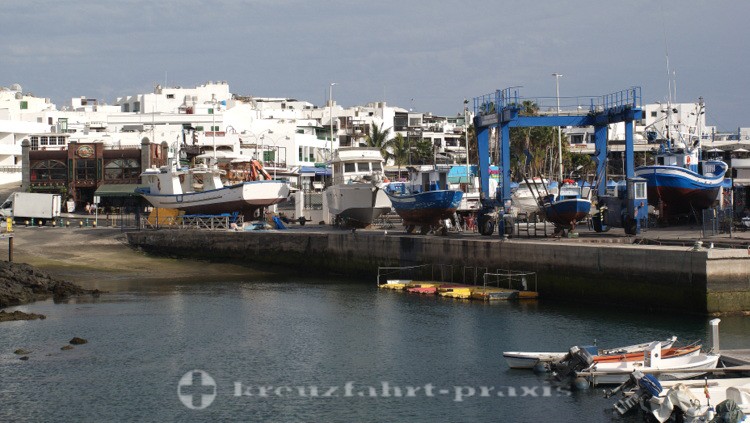 In the evening we eat in the Mediterranean area of ​​the Atlantic restaurant. Food and service are very good. Afterwards we watch the show “Beatles Forever” in the theater, an all-round great performance.